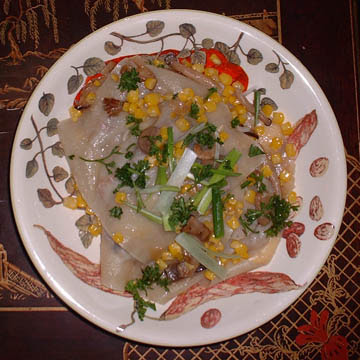 We had a package of egg roll wrappers in the fridge, and leftover duck from yesterday, so I put them together to make duck ravioli.

I found about a third of a bag of frozen Asian mushrooms from Trader Joe's in the freezer and decided they would work well with the duck as a filling for the pasta. I don't like shiitake mushrooms any way except fresh, so I picked the offending bits from the mushroom collection and sauteed the rest in olive oil with some chopped onion and lashings of salt and pepper. After letting this mixture cool, I chopped half of it finely, and did the same to some pieces of duck and a little duck skin, for richness.

Large dollops of this mixture were sandwiched between two egg roll wrappers to make eight large ravioli that I then cooked in two batches in a saute pan of simmering water for about 4 minutes. I can now understand why most ravioli recipes call for "scant teaspoons" of filling. When the pasta is cooked and the noodles soften, the filling becomes too heavy and wants to escape through newly formed tears in the pasta. Oh well. Live and learn!

Next, I added half a stick of butter to a pan and, after the foaming stopped, tossed in a handful of frozen corn and the other half of the sauteed mushrooms and onions. After a few minutes of cooking, I put the pre-boiled ravioli in, in two batches, and watched them fall apart. Ugh. But garnished with some scallion and fresh parsley, they were passable. More importantly, they tasted awesome! 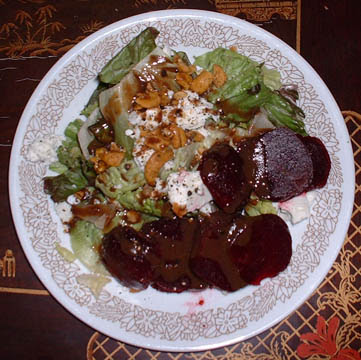 With the ravioli, we had a salad with roasted beets and goat cheese. I love the version they serve at Louisiana, and did what I could to replicate it with what I had on hand: bagged butter lettuce salad; Melissa's Baby Red Beets; and a log of soft goat cheese. If we had them, I would have put some toasted or candied walnuts on top, but alas, we only had peanuts...and some Thai seasoned cashews from Trader Joe's. They taste an awful lot like Kaffir lime leaf, but what's wrong with that? so I used them. Finally, a vinaigrette made with balsamic vinegar, honey mustard, and extra virgin olive oil was drizzled on top. Not bad at all, if I do say so myself! Even Neal admitted that the non-pickled beets were tasty (he's not a fan of this particular vegetable).
Posted by theminx