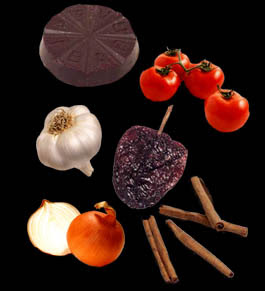 I was intrigued by a chocolate bar the other day, Hachez 77% cacao with strawberry and pepper. I thought it might be filled with a peppery strawberry jam-like substance; in actuality, the dark chocolate was studded with bits of strawberry and green peppercorns, an unlikely but oddly compatible combination.

And why shouldn't it work? Chocolate tastes amazing with a little spice and it works well with heat too. Take the Oaxacan dish of molé Colorado, or molé rojo, one of seven traditional sauces of the region. Molés can have fifteen and even twenty ingredients including garlic, tomatoes, stale bread or tortillas, sesame seeds, almonds, spices such as cinnamon and cloves, and of course, chiles. Some versions of molé rojo even include chocolate.

My first encounter with molé was a home-made version, prepared by a customer of the jewelry store in which I used to work. She loved to cook and although she wasn't of Mexican descent, she enjoyed the toasting and grinding and slow-cooking of traditional molé making. After waxing rhapsodic one afternoon, she promised to bring me some the next time she prepared her molé Colorado. A few weeks later, she brought me a container with hunks of turkey meat smothered in a dark rich sauce and wrapped in flour tortillas. It was heavenly. The sauce was complex and elegant, yet rustic, and had a definite chocolate flavor to temper the chile kick.

Not being one to go through the rigamarole of making molé from scratch, I prefer to opt for jarred versions. I tried the Dona Maria brand once, and it was far too hot for my tastebuds. A powdered version, purchased in New Mexico, also didn't make the grade. Last night, I decided to finally crack open a jar of Trader Joe's molé rojo. I tasted it with the tip of a spoon, and it was grainy and spicy and obviously chocolately, with a bit of heat. Stirring a few tablespoons of it into some chicken stock, I also noticed that it was quite oily, and the dark brown oil separated from the rest of the lighter brown mixture, making for an unappealing look in the pan. After simmering some chicken thighs in the sauce for thirty minutes, the separation was really beginning to bother me, so I skimmed off all of the oil. (We don't need to eat all of that fat anyway.) The resulting sauce was too pale to be molé rojo, so I added a handful of semisweet chocolate chips and stirred it well. The color became a beautiful burnished brown and the sweetness of the chips only brought out the rest of the flavors.

We enjoyed our chicken molé with cilantro rice and buttered sweet corn, and a salad of orange segments and heart of palm on a bed of arugula with a Meyer lemon/pomegranate molasses vinaigrette. Lucky for me, there was chicken and sauce left over, and I will be enjoying it for lunch today (rather than a cheese sandwich).

While looking for information on Trader Joe's molé rojo, I found that it was recalled in May of 2005 because it did not adhere to TJ's standards. It's currently off the market, meaning if you haven't had the chance to try it, you probably never will. A shame, as it's tasty stuff.

An interesting and thorough article on molés can be found here.
Posted by theminx