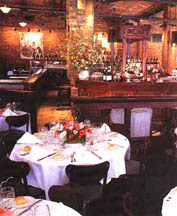 Two days after Christmas, Neal and I headed up to Manhattan with Dad and girlfriend to see the Christmas Spectacular at Radio City Music Hall. After the show, and a trip through Chelsea Market (oh, how I wished I lived in Manhattan, to be able to experience a crusty loaf of Amy's Bread and to smell the heavenly chocolate aroma wafting out of Fatwitch on a regular basis!), we headed to our dinner destination, Tribeca Grill.

Dad is all into Tribeca Grill because DeNiro is an owner; he's been there at least twice before. GF was paying for dinner, and is a picky eater, so it was strange that Dad asked me to make restaurant suggestions. I tried to stick to places that would serve steaks, and I knew Italian food was safe too, so my short list included Felidia as well as Tribeca Grill. I threw in db Bistro Moderne as well, because I am dying to try the hamburger there. Anyhoo...guess which restaurant made the cut? Well, you don't have to guess, as I've already told you. ;)

We made early reservations, as we had a long drive back home after dinner, and it was nice that the place was mostly empty. Read: quiet. I hate noisy restaurants, and we seem to dine at a good number of them. We were escorted to our table, after which GF complained about the hard chairs and Dad suggested we request a booth, while I rolled my eyes. The table was fine. But I don't say anything, as free food was involved.

My salad was a bit different from my expectations. The endive and other ingredients had been chopped and tossed in the dark fig vinaigrette. It was a nice balance of bitter and sweet. Neal's confit was served piping hot and it was tender and delicious. And Dad's and GF's salads were...well, just salads.

They were equally daring with entrees, and Neal joined their party: Grilled Filet of Beef Garlic Whipped Potatoes, Sautéed Spinach & Crispy Onion Rings. I went the beefy route as well, with Braised Short Rib Foie Gras Ravioli, Porcinis & Horseradish Consommé. I had a taste of Neal's filet, and it was good, but paled in comparison to my single, enormous, boneless, short rib which were like the world's richest pot roast. God, I loved my mother's pot roast when I was growing up, and this was very much like an adult version, with meltingly tender meat in a rich sauce. The ravioli oozed foie gras into the bowl, making it a bit difficult to eat the molten foie gras with a fork. Additional bread was quickly called to the table when I discovered that a lump of Neal's mashed potatoes wasn't going to absorb my leaky foie properly. The only flaw to my meal was that the porcinis perhaps hadn't been cleaned as well as they should have been; the occasional crunch of sand was unpleasant.

Dessert was unexceptional, although Dad's portion of Tahitian vanilla creme brulee -- large enough for two -- was nicely eggy. I had an espresso "parfait" that turned out to be a little bombe of ice cream molded over a bit of crisp meringue, with white chocolate macadamia sauce. Neal went for the Banana Tart with Milk Chocolate Malt Ice Cream, mostly for the ice cream. The tart with its bruleed top was pretty, but the crust was overly-thick and a bit bland. If I hadn't been pretty full, and had we not eaten strawberry cheesecake the past two evenings in a row, I might have tried their pumpkin version with cranberry caramel sauce. Ah, maybe next time.

The meal was, on the whole, very good, and our waitress was friendly and capable. Neal liked the place a lot, I think partly because of the atmosphere, so we wouldn't turn down another meal at Tribeca Grill.