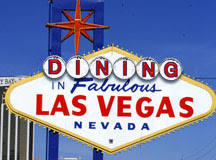 On our second day in Las Vegas, DH and I experienced a couple of the buffets that the city is known for. As we were going on a long bus trip to the Grand Canyon the next day, we didn't want to eat anything too exotic for dinner lest it cause tummy upset and necessitate the frequent use of bus bathrooms. Therefore, we made no dinner reservations.

I had read about Lotus of Siam in Gourmet several years back and had always been curious about the "single best Thai restaurant in North America." We figured it would be safe to try it for lunch, in case a dose of incendiary Thai food didn't sit well with our digestive tracts. (I've never had a problem, but better safe than sorry!)

The restaurant sits in a deserted-looking but sizeable strip mall full of Asian and Latino businesses and restaurants. Despite not looking like a whole lot from the outside, the inside was crowded with patrons. We opted for the buffet, as it seemed the quickest and easiest option. It featured an assortment of stir fries, soups, rice and noodle dishes, plus salad and fresh fruit. Many dishes seemed tame Chinese food clones, but there was also Pad Thai and an incendiary but highly flavorful dish of ground pork (I find it amusing that "pork" in Thai is "moo." Should be "oink," no?) For dessert, I ate my fill of crunchy yet ripe persimmon.

The place was highly efficient, and our water glasses were filled often. The staff is so solicitous that nobody told the doink next to us who asked for chopsticks that the Thai eat with forks, knives, and spoons. I, however, laughed at him.

I wish we had the opportunity to explore their dinner menu, as it featured items I've not seen in our local Thai joints. Perhaps for our next trip to LV.

Dinner
We were originally going to have dinner at a restaurant in our hotel, Fuzio, but when we got there, it was dark. It seemed odd that it was closed on a Tuesday and we never did find out why. So we wandered over to the Mandalay Bay and perused the restaurants there. Aureole was a bit too pricey for an unplanned meal, as was Rick Moonen's seafood restaurant. We then went back the other way to the Excalibur. There are no restaurants of note in that place, a ticky-tacky replica of a castle with knights and wenches and whatnot running around. It was like all the worst elements of a "Renaissance" Festival (in quotes because those things really have more Medieval elements) rolled into one, with slots. Anyway, we ended up eating at their Roundtable buffet, a bargain $14.49. It really wasn't much better than an Old Country Buffet with the same flavorless mac and cheese and rubber chicken. There was a shrimp dish on the Asian buffet that wasn't too bad, and the prime rib, although tasting re-heated, was fine for what it was. The best thing was the dessert bar, from which I served myself a steaming bowl of apple cobbler topped with soft serve ice cream.

Are there any good casino buffets in Las Vegas? I wouldn't know. I didn't really plan on finding out. One was definitely enough!