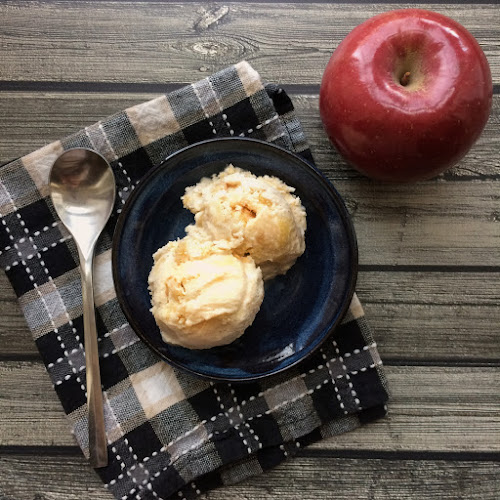 More ice cream! Yes, I do love playing with ice cream flavors, never having been a "plain vanilla" kind of girl. This one has all the flavors of apple pie a la mode: cooked apples; cinnamon; even chunks of buttery crust. There are a few more steps involved here than in some other ice cream recipes, but the result is well-worth the effort.

Melt the butter in a saute pan over medium heat. Add the apples, brown sugar, and cinnamon. Cook, stirring regularly, until the apples have softened but are not mushy, about 8-10 minutes. Stir in a pinch of salt and a little lemon juice. Scrape into a container and refrigerate until cold.

Mix 2 tablespoons of the whole milk with the cornstarch to make a slurry. In a separate bowl, whisk the cream cheese, salt, and cinnamon together until smooth.

Put the remaining milk and cream in a large saucepan with the cinnamon sticks. Bring to a boil, then turn off heat and allow to steep for 1 hour.

Prepare a shallow ice bath: in a large bowl or baking pan, place an inch or two of cold water and several ice cubes. Set aside.

Remove cinnamon sticks from the milk mixture and add the sugar and corn syrup to the pot. Bring to a rolling boil over medium-high heat. Boil for 4 minutes, watching carefully so it doesn't boil over (stir when it starts to expand), remove from heat, and slowly whisk in the slurry. Bring back to a boil over medium-high heat and cook until slightly thickened, about 1 minute. Blend a few tablespoons of hot milk mixture into the cream cheese to loosen it, then pour the cream cheese mixture into the pan of milk. Remove from heat and add the vanilla. Whisk well until smooth. Pour into a container with a tight-fitting lid and place the container into the ice bath until cool, ensuring that the water level doesn't come up as far as the lid. When the mixture seems mostly cool, refrigerate until completely cold.

Freeze ice cream according to manufacturers instructions. Once ice cream is mostly done, start adding the apple mixture a little at a time. When the ice cream is completely done, scoop some into a lidded storage container. Layer on some of the crust pieces. Continue to add layers of ice cream and crust to container until both are used up. Press a piece of wax paper onto the surface of the ice cream. Seal container and freeze until firm, at least 4 hours.