It had been years and years since we had gone to Jimmy's Famous Seafood, so when my brother's company had their holiday party there, I was happy to attend.

Jimmy's menu is expansive, including all manner of starters including flatbreads, classics like crab dip and oysters Rockefeller, and even sushi. There are loads of seafood entrees, plus steaks, and good number of pasta dishes, too. What to order, what to order?

The four of us tried coconut shrimp, the fried crabby mac, fried calamari, and the baked crab imperial sushi roll. 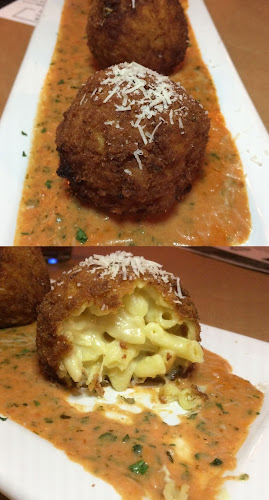 Dad didn't share his coconut shrimp, so I'm going to assume they were good. The fried crabby mac came in ball form - four enormous ones on a puddle of "ecstasy" sauce. The mac was creamy and had a decent amount of crab, and the outsides were crisp enough to contain the molten goodness. It was definitely an app to share. 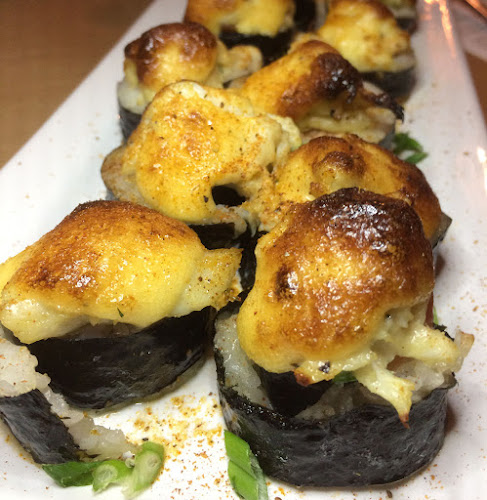 I was less-impressed with the crab imperial roll. Chunks of salmon were hidden within the rice and nori wrapper, and they seemed a bit overcooked. 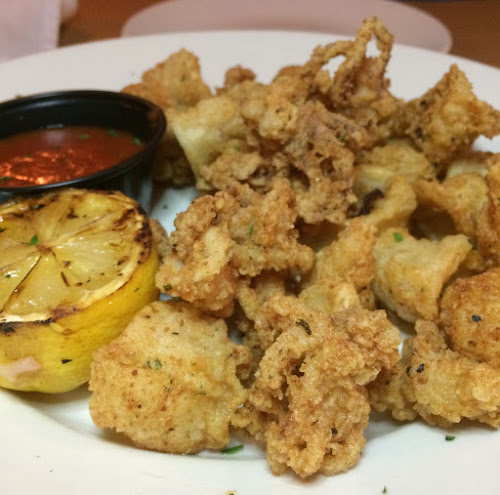 The calamari, however, was pretty good, with a generous amount of tentacles. It's getting so it's hard to find *bad* calamari in this town anymore, which of course is a very good thing. 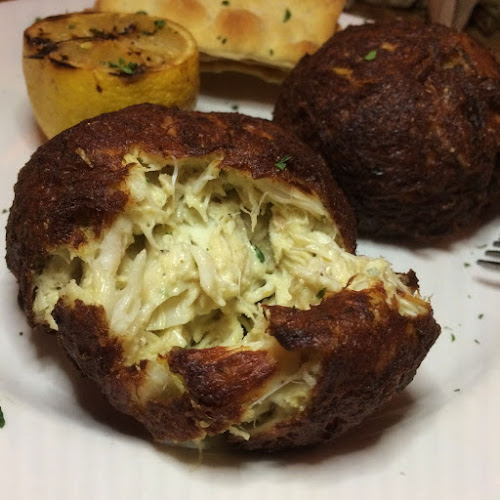 Three of us ended up with crab cakes. I ordered the duo of what the menu describes as "Baltimore's Best Crab Cakes" and "twin 8oz multiple award winning masterpieces." Every person in the area has a different idea of what constitutes "Baltimore's Best" crab cake, and I'm sure some think Jimmy's should get that title. I'm not one of them, but I'll admit that Jimmy's are tasty. Bonus points for offering them fried as well as broiled. I couldn't even finish one of them and happily took the remainder of my plate home in a doggy bag.

Points also for actually broiling their non-fried crab cakes until they have some color. I've had broiled crab cakes that didn't even appear cooked. It doesn't look at all appealing, and I don't understand why any place would do that.

The broiled cakes (in a 5 oz portion) came with Mr Minx's (and Minx Bro's) steak and cake dinner, alongside a 12 oz NY strip. The meat was perfectly seasoned and cooked to medium; leftovers were great on top of a salad the next day. 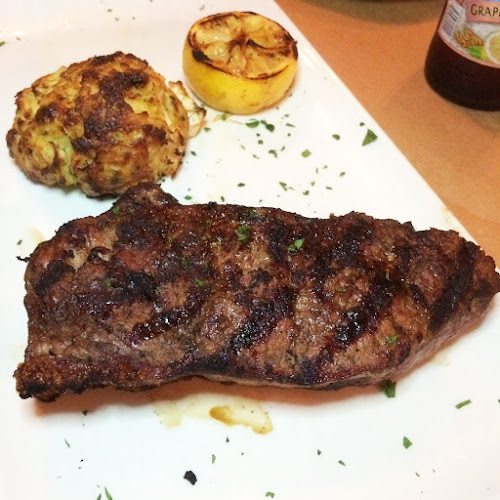 Dad had the bbq ribs, which came plated in a mound of individual, glossy, sticky, riblets. Despite saying he wasn't particularly hungry after the appetizer round, he couldn't stop eating them. "I'll just have one more," he said at least twice before giving up and taking the rest to go. 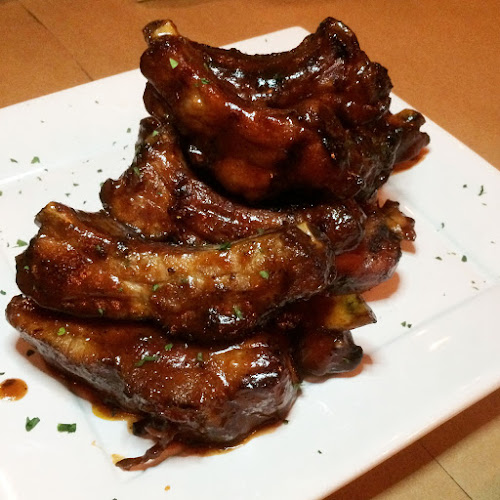 We can't pass up brussels sprouts, especially when they're served with bacon. Jimmy's had good flavor, but the texture was odd. They seemed to have been boiled at some point, rendering them a bit mushy in the middles. Cutting them in half and simply frying them would have been the way to go - would rather have a crunchy half-raw sprout than an overcooked one any day. 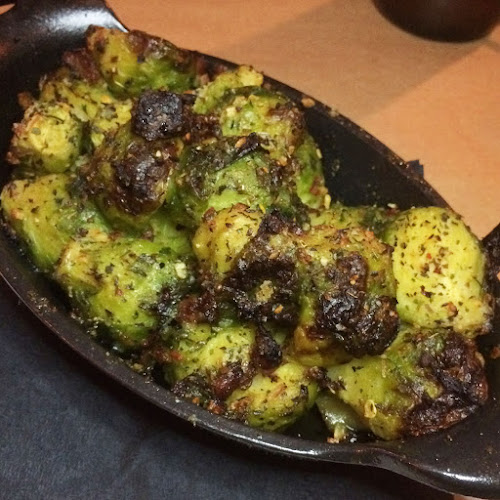 I also tried a steamed crab that one of the other party-goers had ordered. The seasoning mix was spot-on for my tastebuds: not too salty, not too hot, yet noticeable. Definitely have to keep Jimmy's in mind for future crab feasts.

We were very full after consuming so much food and passed on dessert. Jimmy's offers the usual over-rich suspects like cheesecake and creme brulee, but I would have liked to try the Smith Island cake if I had some room.

Jimmy's was definitely not perfect, but one can see why they've been around for so many years now. There's something to please pretty much everyone (except, perhaps, vegetarians).