Southern Provisions used to be Jokers n Thieves, with the lovely and talented Jesse Sandlin in the kitchen. I'm not sure what happened there, why JnT became a different restaurant with the same general theme. We had dinner there once, summer before last, and liked it quite a bit. The soft shell crab waffle sandwich was killer, and I fell in love with the Carolina gold rice porridge served with a slab of smoky brisket. In any case, Jesse is off doing other things and the nice space on the corner of O'Donnell and Potomac Streets is now called Southern Provisions.

We had a book signing down the street at 2910 on the Square (a fab gift shop that we highly recommend) in early December and moseyed over to Southern Provisions for dinner afterward. I had heard that they were offering the trendy Nashville hot chicken sandwiches, and wanted to give them a try. 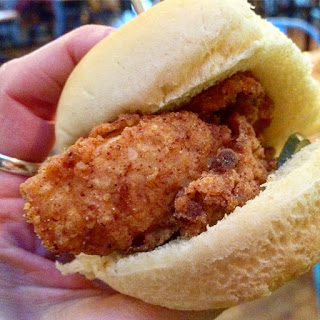 We ordered a couple of beers and both the Nashville hot chicken sliders and something called "Ol’ Saint Nick Fritters" for appetizers. I did the ordering, and when I added the "Chop Salad," our waitress seemed inordinately confused. Apparently she thought the sliders were my entree. A bit of advice to wait staff: when a fat woman orders a lot of food, just write it down and bring it. Maybe ask if she wants it all at once or some as an app and some as an entree, but don't stare at her like she has three heads. She may be a food writer who just wants to taste everything. There are these things called "doggie bags" if she doesn't finish it all.

Let's start with those sliders, shall we? Real Nashville hot chicken is marinated, fried, and sauced in an ass-kicking cayenne-based paste. It's red and it's hot. As a sandwich, the chicken is typically served on white bread with pickle chips.

Well, they got the pickle chip part right.

The chicken itself was fried, somewhat dry, breast meat. Neither the chicken nor the breading was particularly flavorful. And there was no discernible heat. The menu claims the chicken is dipped in something called Jim Beam Devil's Cut hot sauce, but perhaps, as in the making of a dry martini, a bottle of the sauce was merely waved over the chicken. Disappointing. 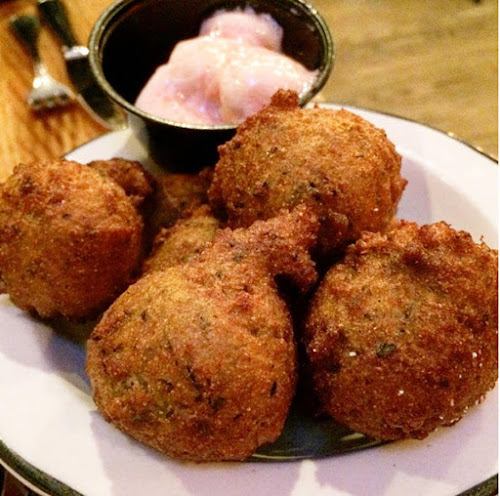 I ordered the "Ol’ Saint Nick Fritters" just because they sounded like a disaster. "Fresh mint, sage and ginger fritters served w/peppermint bark butter." Not only is the Oxford comma conspicuously absent, I couldn't get my mind around the peppermint bark butter. The waitress assured me that the dish was tasty. She also said the fritters were like hush puppies, crisp on the outside and soft in the middle--an apt description. Definitely crispy on the outside, the fritters were raw and gooey on the inside. The waitress whisked them away with apologies; a few minutes later, a manager brought us fresh ones that were cooked all the way through.

I slathered a hot ball with some of the pink butter and took a bite. Weird, but not awful. On their own, the fritters tasted a tad like stuffing. The butter was creamy and tasted like melted Hershey's white chocolate kisses, the ones with the bits of candy cane inside. It would have been fab spread on a slice of chocolate cake. Had there been no sage in the fritters, it would have worked with them, too. Otherwise, it was just weird. But far from inedible. 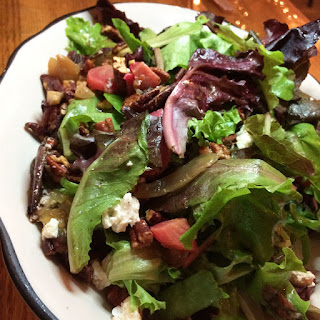 I imagine it was my mistake thinking that a "chop salad" was going to be a "chopped salad." A chopped salad is, well, chopped. That is, everything is cut into small pieces, including the lettuce. A sturdy lettuce like iceberg or romaine works best; their prominent rib actually offers something to chop. Southern Provisions' salad was just a salad. There was a mess of baby greens topped with milky blobs of what was listed as "house made" mozzarella, plus roasted beets and pecans. A shit ton of pecans. An entire pie worth of pecans. I'm not complaining - they were the best part of the salad. What wasn't the best part was the "warm bacon & onion vinaigrette" which was unbalanced, leaning too far toward sour. It was also watery, which may have meant the greens hadn't been dried well after washing. In any case, it was a bad salad and I regretted ordering it. 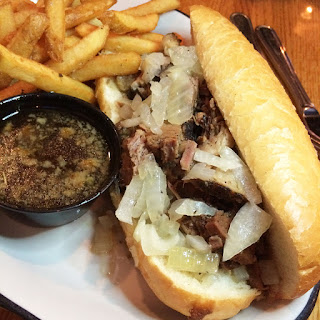 Neal's brisket French dip was meh. The "sautéed" onions were little more than steamed (and whomever chopped them needs to learn better knife skills). The brisket was tender and had a nice smoky flavor, but it was a little hard to taste with all the bread. The fries were good though, well-cooked and seasoned.

So. Completely meh. Maybe that's being generous. They did take the fritters off the tab, which was nice. I should have complained about the abysmal salad and lack of hot sauce on the chicken, too. We actually should have sent it all back. But what's bitchier - being a picky and complaining customer, and making the wait staff suffer when it's not their fault, or writing about it afterward?