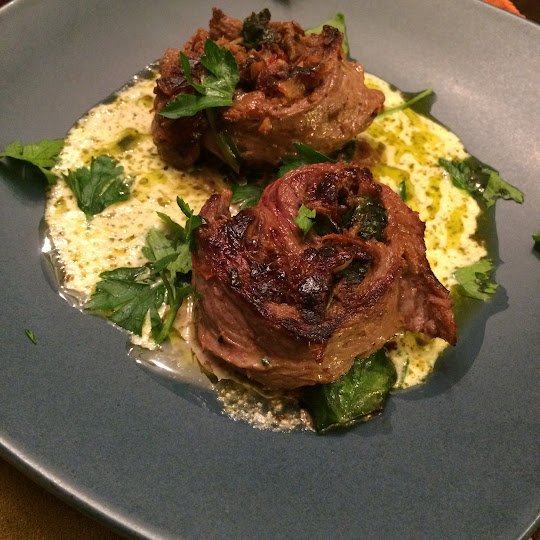 I've been seeing stuffed flank steak recipes all over social media recently, so I decide to try it. Normally, I marinate flank steak in a combination of garlic, Worcestershire, tomato paste, and soy and broil it until crusty brown on both sides. It's tasty and quick. Why I decided to do something fancier is beyond me. For one thing, it's not particularly easy to butterfly a flank steak if you're not used to butchering meat. My steak was oddly shaped, too, which also caused problems. But I patched it up with other bits of the steak and it seemed to work fine in the end.

The filling is a umami bomb of sundried tomatoes and mushrooms. While it's really yummy as a steak filling, I'm going to use the leftovers as a pasta topping, where I think it will really shine.

Make sure to season your steak with salt and pepper on both sides before filling and rolling. And it's flank steak, so while it has a lot of flavor, it's not going to be super tender. Worth a try though.

I sauced my steak with melted goat cheese mixed with pesto. Yes, I did notice that the sauce broke because the pesto was a bit oily. It still tasted good. Next time, I think I'd make a white sauce first and add the cheese and pesto to it, rather than just melting the cheese and stirring in the basil paste.

Place the sundried tomatoes in a bowl. Pour over a cup of boiling water and allow to sit until the tomatoes have softened. Drain tomatoes and chop finely.

In a large skillet over medium-high heat, add 2 tablespoons of oil and the onion, mushrooms, and bell pepper. Season with a big pinch of salt. Cook, stirring regularly, until mushrooms give up their liquid and the dish is mostly dry, about 15-20 minutes. Stir in the garlic and tomatoes and cook an additional minute or two. Remove vegetables to a bowl and set aside to cool.

Butterfly the steak like a book along long edge, cutting and spreading the meat until it's twice as wide as when you started. Unless you have a very sharp knife and have done this before, you'll probably cut some parts too thinly and make holes. Just cut a flap in the thicker part opposite the hole to make a patch. As long as the holes are covered with meat, no worries. Cover the meat with plastic wrap and pound to a uniform thickness of about 1/4".  Season the meat on both sides with salt and pepper.

Spread the cooled vegetable mixture evenly over the meat, from edge to edge. Top vegetables with a layer of spinach leaves. (If you have made holes, put the spinach down first to create a barrier.) Starting at one long end, roll the steak jelly-roll fashion and secure in several places with kitchen twine. Starting about one half inch from the edge, place a line of toothpicks spaced about an inch apart across the top of the meat roll. Wrap the meat in loosely in foil and refrigerate for at least one hour.

When ready to cook, cut the meat into slices between the toothpicks, which will give you inch-thick spirals of stuffed meat. Put another toothpick into the bottom of each spiral (across from the original toothpick) for security.

Heat a couple tablespoons of olive oil in a large skillet. Add the meat 2-4 pieces at a time, depending on the size of your skillet. Don't crowd the meat, otherwise it will steam and not brown. Cook until crusty and brown on both sides, about 8 minutes.