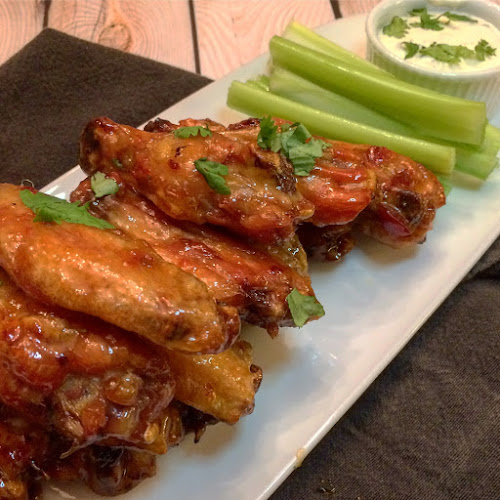 It's Super Bowl time again, and while I don't have any horses in this particular race, I will probably still watch the game just to cheer against the Patriots. And since the game is on at dinner time, I'm going to want to make something that can largely be prepped ahead of time and warmed up just before we want to eat. Chicken wings are a perfect example of such a dish.

I'm not a fan of deep-fat frying, so I prefer to bake my wings. It seems like many of the baked wing recipes online call for ridiculously short cooking times. I think 45 minutes is the longest I've seen, and even then, the wings come out somewhat flabby and not crisp enough for my liking. So I came up with another method.

Everyone knows that cooking french fries twice makes them extra crispy on the outside and fluffy on the inside. Korean fried chicken is extra crisp because it, too, is fried twice. And my baked chicken wings are nice and crisp because, you guessed it, I bake them twice.

The first baking is done in a baking pan or casserole dish, to capture all of the fat that oozes out from under the skin. The second baking is done on a cookie sheet at a higher temperature to brown the wings and crisp the skin. It may take over an hour in total, but the two bakings can be done separately, with a rest in the fridge in between. That way, you can prep the wings in the morning, and then when you're getting hungry, you only need to preheat the oven and pop the wings back in for 20 minutes. 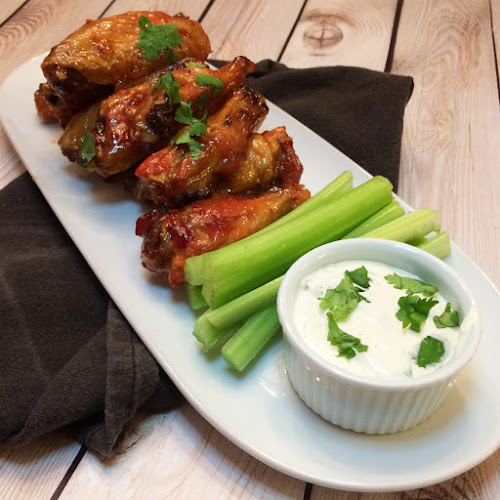 The result is so good, it's definitely worth the effort.

Also worth the effort is cutting whole wings into pieces yourself. Pre-cut drummettes and flats are about $2 more per pound than whole wings. However, unless you have a nice heavy chef's knife, separating the joints is a little difficult. I remember panting and puffing through my first batch of wings because I didn't have the proper tools. So I bought a small cleaver. The problem with a cleaver, however, is they can be quite dangerous for those of us unaccustomed to using them. It's not a good idea to hold the wing with your free hand while you're chopping down with that big blade because if you slip.... oops. Well, you probably didn't need that finger anyway.

I stretched each wing out on the cutting board, put my left hand well out of the way, and aimed for the joint with the cleaver in my right hand. Sometimes the cleaver cut cleanly, and sometimes I had to chop twice. In any case, it was much more quick and efficient than my wimpy chef's knife. 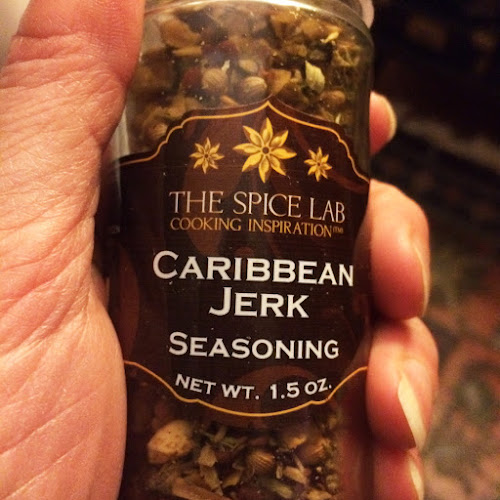 A few days before I made my wings, I got a box of goodies from The Spice Lab. This Florida-based woman-owned and family-run business offers everything from spices and exotic salts to condiments, kitchen tools, and loose teas. They even offer unusual items for mixologists, like pink salt shot glasses. One of the samples they sent was Caribbean Jerk seasoning, a chunky blend of chiles, allspice, and salt in one of those convenient twist-top grater bottles that keep the herbs whole until ready to use. As the mango pepper jelly I used for my base had a tropical touch, I knew jerk spices would work well even with the other Asian flavors in the sauce. It definitely added a little extra sumpin'-sumpin' as far as seasoning was concerned.

So if you're looking for something other than the usual nachos or sliders as a game-time snack (or dinner), give these wings a try. Of course, they're also tasty all year 'round.

Carefully separate the wings into three pieces, drummette, flat, and tip. (I used a cleaver, but if you have a nice heavy chef's knife, that will also do.) Discard the tips or save in a plastic bag in the freezer until you get enough chicken bits to make stock.

Line two 9x13 baking pans with foil and arrange the chicken pieces in one layer, skin side-up. If you have more than will fit comfortably, use three pans. Bake for 25 minutes. Take pans out of the oven and, using tongs, move wings around to insure they're not sticking to the foil--but don't turn them. Give them a liberal sprinkling with the jerk seasoning and return pans to the oven to cook for an additional 25 minutes.

While chicken is baking, make the sauce.

Melt the pepper jelly in a saucepan over medium heat. Add the vinegar, fish sauce, sambal, garlic, ginger, and cayenne and bring to a boil. Turn down and let simmer for 3-4 minutes. Season with a bit of lime juice. Add butter and cook until melted, stirring regularly. Remove sauce from the heat and set aside.

Once the wings have spent their initial time in the oven, remove the pans and, using tongs, transfer them to a large rimmed baking sheet lined with foil or parchment. At this point they are done and only need browning. If you don't want to eat the wings just yet, cover the pan and place in the refrigerator. When ready to cook, preheat the oven to 400°F and return wings to oven. Bake for 20-25 minutes, until browned and crispy and warmed through.

Using tongs, remove the wings to a large bowl. Give the sauce a stir and pour over the wings. Toss wings to coat with sauce, then pile onto a plate. Sprinkle with more jerk seasoning, if desired.

Serve with celery sticks and creamy dressing of your choice.