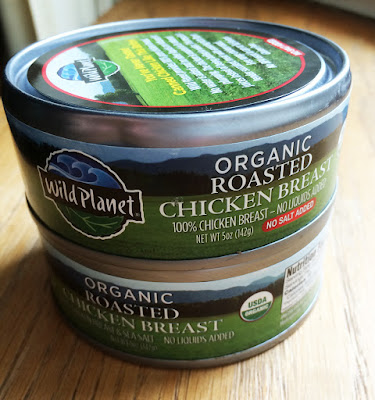 I have to confess that I am not a fan of canned meat products. Fish is ok--tuna and sardines and anchovies and salmon and all that. But canned meat? It's usually full of salt and doesn't taste particularly good. So when Wild Planet contacted me about trying their new canned chicken product, I was skeptical. Then I remembered how much I enjoyed their canned white anchovies. (So hard to find! but worth the search; Amazon carries them now.) Sure, why not--I will try the chicken.

Wild Planet sent two cans (and anchovies! plus two other products I'll write about later). I didn't want to just slather the chicken in mayo and call it chicken salad. Instead, I cooked with it. And, I gotta tell you--warmed up, WP canned chicken breast is pretty darn good. We tried the sea salt-seasoned one first, and it was just salty enough. The texture was like albacore tuna, very meaty but a little dry. Warming it up brought out the chicken flavor and made the chicken moist as well. 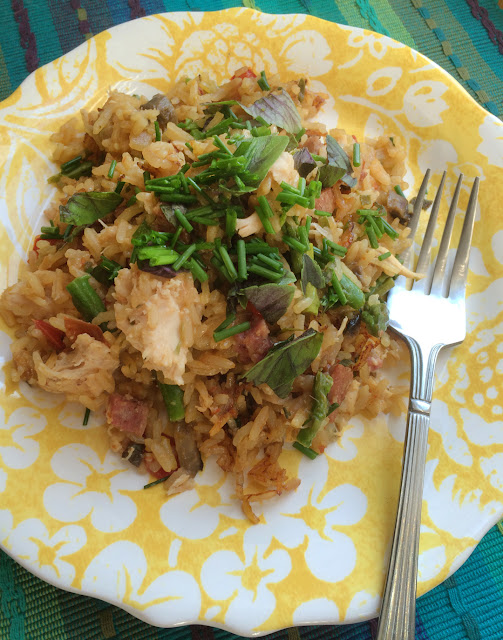 It was one of those evenings when I wasn't sure what to make for dinner, and we didn't have much in the way of fresh food, apart from half a bell pepper and lots of fresh herbs from our garden. I thought perhaps I could challenge myself to use only the pre-Fancy Food Show samples we had received to try, which included some dry sausage. The original thought was to make something akin to fried rice, but ended up much closer to paella.

I do have a paella pan, but surprise surprise--it was much easier to get a socarrat (crusty bottom) with the non-stick pan! And the chicken + sausage + herbs combo was very tasty. Leftovers made a fab lunch as well.

Heat a tablespoon of olive oil in a large, nonstick, skillet over medium-high heat and toss in the pepper, onion, and mushrooms. Add a big pinch of salt and stir vegetables to coat with oil. Stir in the sausage and turn the heat to medium. Cook, stirring frequently, for 6-8 minutes, until the vegetables are soft and the sausage has started to crisp up. Stir in the garlic.

Add the rice to the pan and stir to coat. Cook, stirring frequently, until the rice starts to smell toasty, about 6-8 minutes. The veg should be browning at this point, and the sausage should have rendered out much of its fat. Pour in the broth and turn up the heat to bring the liquid to a boil. Once boiling, lower the heat to a simmer and cover the pan. Cook until the rice is tender and the liquid is evaporated, 10-15 minutes. If the broth evaporates quickly and the rice is not yet cooked, add a bit more broth. Don't worry about stirring so much during this portion of the cooking--you actually want the rice to stick to the pan. Just don't let it burn.

Once the rice is nearly done, add the tomato, paprika, and a nice handful of fresh herbs, the more the merrier. Taste for seasoning and add the pepper and more salt, if needed. Turn up the heat a little to allow the rice to crisp up; stir occasionally,

Break up the chicken into chunks and gently mix into the paella. Heat only until warmed through.

Serve garnished with the chives and basil.