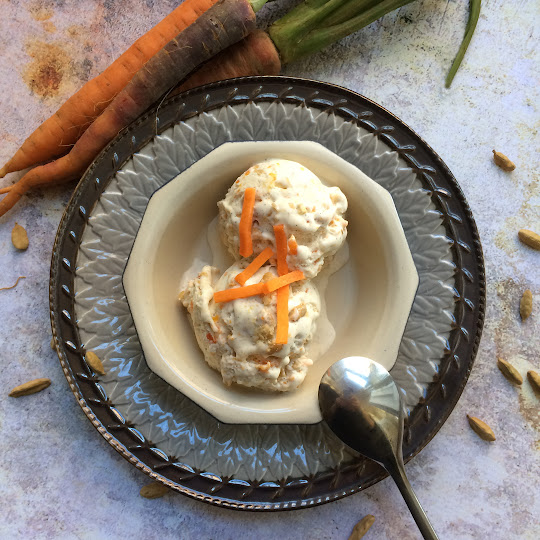 Ever since I discovered the book, Jeni's Splendid Ice Creams at Home, I've been somewhat obsessed with making ice cream. I prefer a custard-based ice cream, made with eggs, to the so-called Philadelphia-style (without eggs) because it has a smoother texture, but hate having to use so many eggs. Egg yolks, rather, which leaves 5 or more whites to use in something else. Yeah yeah, egg white omelets, meringue, yadda yadda. Still - it makes more work for me to think of another application. Jeni's recipe is just as smooth and creamy as an egg custard based ice cream, but is thickened instead with cornstarch and cream cheese. A pack of cream cheese lasts long enough in the fridge to make several batches of frozen treats, and can always be put into service as a bagel schmear.

Of course, me being me, I haven't made any of Jeni's recipes, but I have used her technique several times already. The Key Lime Pie ice cream I made in August was a huge success. Last month I made a Peanut Butter Pie ice cream, upping the cream cheese and adding both peanut butter and peanut powder. This time, I wanted to do something with cardamom. Cardamom is an underutilized spice, at least in this country, but it's popular in both Scandanavia and India. I wanted to make an ice cream that was flavored only with cardamom, but with some sort of textural interest. There's an Indian dessert that I love called gajar ka halwa, made with carrots and milk and seasoned with cardamom. I thought adding some of that to the ice cream, along with crushed cashews, would work nicely.

And it did. It was rich and cardamom-y, tasting a lot like kheer, an Indian rice pudding, which made me think I should have added some basmati rice as well. But we're not making frozen rice pudding here....

For the ice cream: Mix 2 tablespoons of the whole milk with the cornstarch to make a slurry. In a separate bowl, whisk the cream cheese and salt together until smooth. Prepare a shallow ice bath: in a large bowl or baking pan, place an inch or two of cold water and several ice cubes. Set aside.

Cook the remaining milk, cream, sugar, corn syrup, and cardamom in a large saucepan until it comes to a rolling boil, Boil for 4 minutes, watching carefully so it doesn't boil over (stir when it starts to expand), remove from heat, and slowly whisk in the slurry. Bring back to a boil over medium-high heat and cook until slightly thickened, about 1 minute. Blend a few tablespoons of hot milk mixture into the cream cheese to loosen it, then pour the cream cheese mixture into the pan of milk. Whisk well until smooth. Taste for seasoning and whisk in more cardamom if you would like a stronger flavor. Pour into a container with a tight-fitting lid and place the container into the ice bath until cool, ensuring that the water level doesn't come up as far as the lid. When the mixture seems mostly cool, refrigerate until completely cold.

For the carrots: Combine all ingredients except cardamom in a saucepan and bring to a boil. Cook over medium-high heat until most of the liquid has been absorbed by the carrots, about 10 minutes. Season with cardamom. Scrape into a lidded container and refrigerate until ready to use.

To finish: Freeze ice cream according to manufacturers instructions. Once ice cream is mostly done, start adding the carrot mixture a little at a time. It will have chilled into a mass, but you can crumble it with your fingers into the ice cream maker. Once the carrots are combined and the ice cream is done, scoop some into a lidded storage container. Layer on some of the cashews. Continue to add ice cream and cashews to container until both are used up. Press a piece of wax paper onto the surface of the ice cream. Seal container and freeze until firm, at least 4 hours.