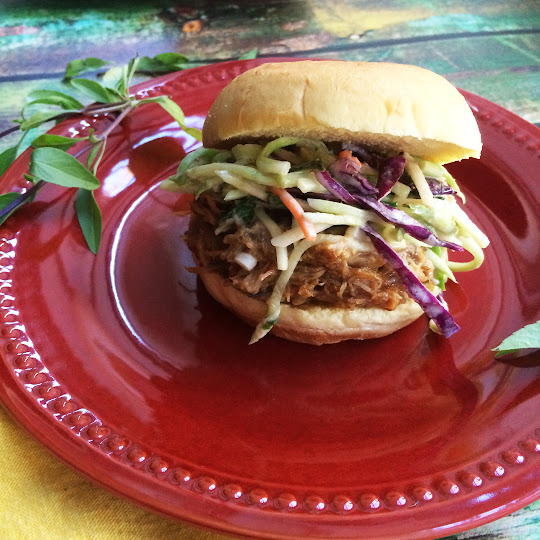 It's football time again, and the Ravens have a ton of 1 pm games. I hate that. It really cuts into my ability to make interesting weekend food. You see, I only cook on the weekends (Mr Minx has weeknight kitchen duty) and I like to spread my prep and cooking out over a long period of time. If I spend a big chunk of the afternoon with my eyes glued to a football game, that gives me much less time for prep. So I tend to resort to either long-cooking recipes like chili or fast things like nachos, both of which are rather boring. To me, anyway.

I also like to make things like pulled pork. A pork butt has to cook for hours, so I pop it in the oven before gametime and by the time it's all over, the meat is ready for shredding. But I can't use bottled bbq sauce. I haven't really found one that I like. Most are too sweet, or too smoky. And I figure if I can't make an entirely inventive meal on Sundays, I can at least make one component from scratch. Like bbq sauce.

I like making sauces, and bbq sauce is easy if you have the basics: ketchup; onion; brown sugar; an acid. Mr Minx picked up a bottle of McCormick Red Curry seasoning recently, so I used it to make a Thai-ish bbq sauce. We already had fish sauce and lime juice on hand, so it was pretty easy to throw together and refrigerate before the game. Afterward, I shredded the boneless mini pork butt that was cooking in the oven and made a salad with a bag of broccoli slaw and leftover peanut sauce.

Easy, time efficient, and somewhat interesting. Oh, and tasty, which of course is the most important part.

Thai Red Curry BBQ Sauce
This sauce would also be a great glaze for chicken wings.

Heat a small amount of olive oil in a sauce pan and add the pepper, onion, and a pinch of salt. Cover pot and cook until vegetables are wilted, stirring occasionally, about 4 minutes. Add garlic and stir well to combine. Cook an additional minute until garlic is fragrant. Add a teaspoon of McCormick Red Curry seasoning to the pan and stir well. Add the cilantro, ketchup, preserves, stock or water, and lime juice and bring to a boil. Cook over medium heat until reduced and thickened to ketchup consistency. Season with additional 1 or 2 teaspoons of curry seasoning, and a few tablespoons of fish sauce. The sauce should be fairly tangy, but if you prefer a sweeter bbq sauce, add a tablespoon or so of brown sugar.

Remove from heat and blend to a fairly smooth puree with a stick blender. Alternatively, use a regular blender, but be very careful with blending hot liquids, as the heat buildup in the blender jar can cause the lid to pop off. Either let the sauce cool a bit, or take the center plastic cap off the blender lid and hold a kitchen towel over the lid while blending.

Store in a covered container in the fridge for up to one week. Makes about a pint.