After several "and then there were..."-less weeks, Alton is back with his favorite phrase. Five Wannabes left, one apparent position as Food Network "star" available (and two or three on the Cooking Channel).

This week's Mentor Challenge is basically just a 20-minute commercial for Special K. And speaking of Special K, that commercial with the dippy-looking chick who tries to avoid the cupcake-pushing giant cupcake by closing the top on her convertible while leaving the driver-side window open annoys me. He's still there, dope. He can still see you, and you can probably still smell that sweet, sweet cupcake. (The beginning part of that commercial, where the woman closes the door in the face of the young donut-selling little girl doesn't bother me at all. I hate donuts with multicolor sprinkles.)

So...on with the challenge. The Wannabes must use Special K products in a well-balanced meal. Damaris and Rodney are assigned breakfast, Nikkidinki gets lunch, and Russel and Stacey need to concoct something for dinner. They get thirty minutes to cook, and then one minute to present their dishes to Alton, judge and jury of one.

As the Wannabes cook, Alton goes around to annoy them, a la Tom Colicchio. He dings Nikkidinki for not having authority because she never asks the question, "why." I show my authority by asking that question all the time. WHY are those particular contestants left? WHY are the challenges so stupid? WHY am I watching this? (I do it for you, my loving fans.) Nikkidinki is making a salad with eggplant and Special K croutons, which makes me ask once again, WHY? Thankfully, her oil is too hot and her croutons carbonize, saving poor Alton from having to experience that particular horror. 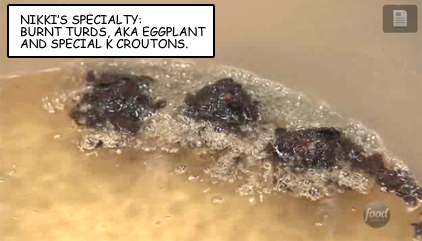 Rodney's making - you guessed it - breakfast pie. Nobody could accuse him of being a one-trick pony. Stacey thinks she has this challenge in the bag. As a working mom, she's often exhausted coming home from the diner, and her kids have no choice but to eat a bowl of cereal for dinner. 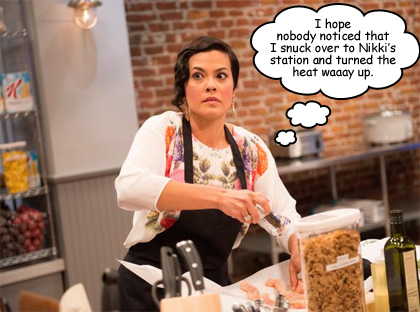 Cooking time is up and Rodney presents his dish first. He's a bit more controlled than usual, but doesn't follow the directions completely. In the one minute presentation, each Wannabe must offer a tip, like, "Don't make your breakfast pie crust with Special K. Instead, take your kids to Denny's for pancakes," and he missed it.

Damaris has made French toast crusted with cereal. Alton doesn't think it's possible to make French toast in half an hour, but I do it all the time and it's terrific. Contrary to popular belief, bread doesn't need eight hours to soak up a couple of eggs and milk. In any case, Damaris does a good job with both her presentation and dish.

Nikkidinki has just tossed a handful of strawberry Special K on her salad and makes up her presentation as she goes along. Apparently her husband loves cereal so much, he puts it on his salad. Um, no. But Alton pretends it tastes good so she seems safe. 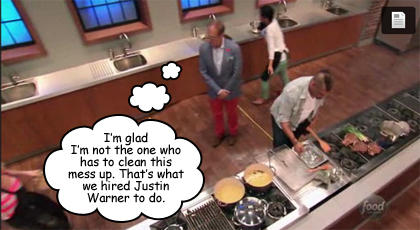 By the way, did you notice that Alton is wearing Viet's unlucky red pants? Or are they Chad's?

Stacey's presentation is far more natural than her norm, possibly because she didn't have much time to write a script and memorize it. Alton makes a comment about how kids would like her chicken, so I took that to mean it was too sweet.

Finally, Russell makes a decent enough dish, but Alton tells him he needs to make more "eye-love" to the camera.

Despite her sweet chicken, Alton gives Stacey the win, and an advantage in the next challenge.

They all jump into the Partridge Family Bus and head to Phil Trani's restaurant in Long Beach. It's one of those old-school continental cuisine joints that should have gone out of business twenty years ago, but according to them, it only opened twenty years ago. The place is doing so poorly that Robert Irvine has been called in to "fix" it, and the Wannabes are going to help him overhaul the menu. 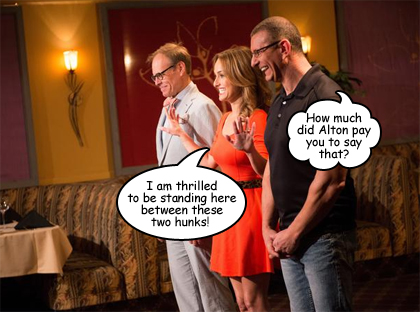 Stacey's advantage in this challenge: she gets to assign dishes to her co-stars competitors. 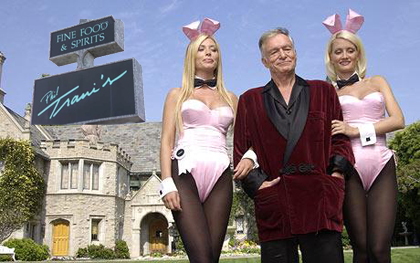 Phil Trani comes out to meet them, along with his two managers, Amber and Ashley. They will present the dishes that need the most help.

First is chicken cacciatore with pasta, which Stacey assigns to Rodney, because it's not pie and she can't imagine that he can make pie out of it. She would be very wrong.

Tournedos of beef topped with large button mushrooms and a side of garlic mashed potatoes is foisted onto Damaris, who doesn't like steak. The Playmates helpfully offer that the potatoes are half real, half from a box. Which begs that popular question, WHY?

Stacey herself takes the crab stuffed halibut that comes with a baked potato. The Playmates don't like it because it looks like an omelette and not seafood. Boy, they'd hate all of the various crab imperial-topped dishes one finds in Baltimore. But...who cares?

Salmon-loathing Nikkidinki gets salmon with onion pepper relish and rice pilaf. Now all of the Wannabes are resenting that they became so friendly and shared their innermost thoughts with the enemy. Stacey looks sweet, but she's evil incarnate!

Finally, Russell gets a boring and underseasoned stuffed chicken breast with yet more rice pilaf. The Playmates say it's not really rice pilaf, just regular rice with stuff in it. Now that, my friends, is a culinary sin.

The contestants get one hour to cook, and then a focus group of loyal customers and first timers will taste and critique, along with Hugh and the Playmates. 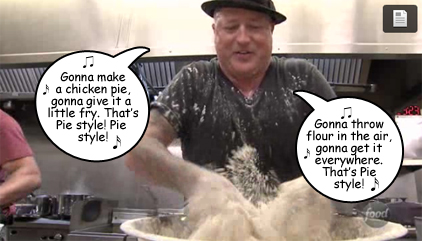 When the cooking is finished, Rodney presents first. He's made chicken cacciatore pie, of course, and his flour-coated t-shirt is evidence. The pies themselves aren't that great - he deep fried them, but they are pale and the dough is undercooked - but his presentation is memorable. He tells the focus group that "Pie Style is contagious," and you know they're wondering where the closest free clinic might be. 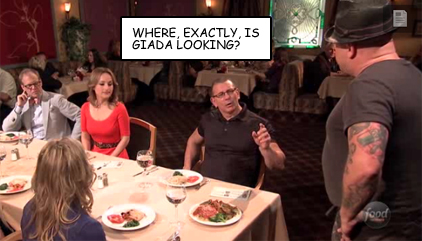 Damaris' presentation is good - she's cute, memorable, but her dish of filet mignon with real mashed potatoes and roasted broccoli is boring and doesn't show any of her Southern charm. Where are the peaches? The bourbon? The boob shake?

Russell, by transforming his boring stuffed chicken into spinach-wrapped chicken poached in vermouth, has created the dish of the evening. He shows some confidence in his presentation and is well-liked by all. 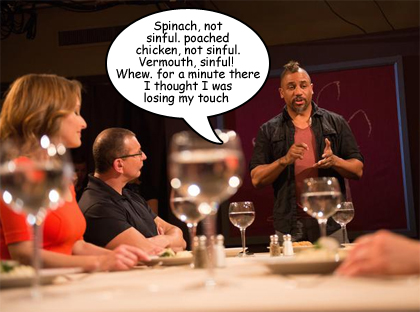 Nikkidinki produces a perfectly-cooked salmon, but there's far too much of what she calls a rice pilaf on the plate. When quizzed about it, she says rice pilaf is just rice with stuff in it, which of course is not true. Even the Playmates can tell you that. Finally, Stacey's halibut roulade is dry and underseasoned. She spoke well, but, ironically, the Playmates thought she came off a little fake.

Back in the Temple of the Giant Glowing Vagina, Alton, Giada, and Robert Irvine compliment Russell on his dish and tell him he's safe from elimination. 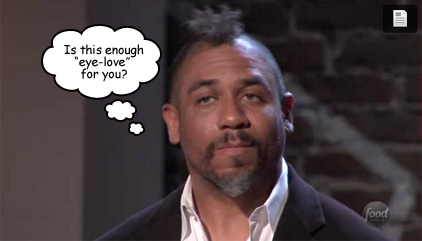 They then send the other four to the green room while they discuss their fates, judging them on their performance throughout the entire competition.

I figure nobody will get eliminated this week, but it ends up being Nikkidinki, long the favorite. She's deemed not to have enough authority. Because, you know, Guy Fieri and Sandra Lee are some of the most authoritative characters on TV. 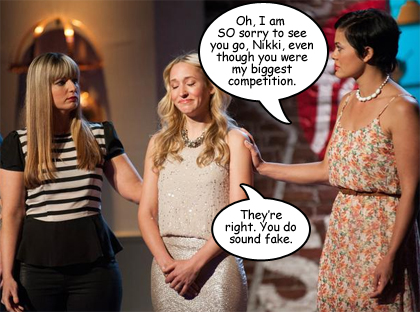 Speaking of Guy Ferry, he'll be producing the pilots that three of the Wannabes will be making next week, in the penultimate episode of the season. That's right, folks - two episodes left!