Ok. Fancy Food Show is over, Independence Day is over, and I'm back from New York and ready to blog. Well, not really. I am back though. Physically.

So, this week's episode of Food Network Star seems so long ago already that I can't remember what happened. Good thing I took notes, huh? :) 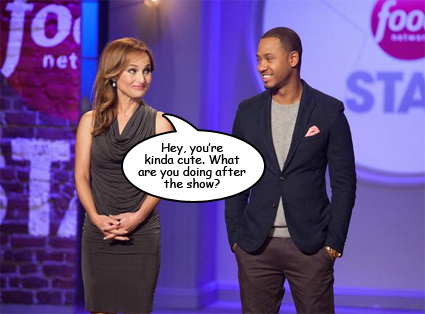 This week, we only have Giada the Human Lollipop working the Mentor Challenge. Apparently she can't handle things by herself, so she enlists E! News' Terrence Jenkins to help her with the task at hand. The Wannabes must pretend they're on some sort of live morning show or whatnot, demoing a sausage and pepper sandwich to Terrence, who will act as host of said show. But of course things are never straightforward with these challenges - each Wannabe will have a nasty backdoor slider thrown at them during their time on air.

Viet is up to bat first. He is shown a pan of sauteed peppers to use in his sandwich, but once the cameras start rolling, the peppers have vanished. All he can do is say, 'where are the peppers?" over and over and over again, like the mere fact that the peppers he once saw were now gone is messing with the synapses in his brain.

Half of the rest of the contestants handle things much better (and the other half does not). Russell just keeps on rolling as if nothing happened when the lights go out on him. Stacey makes do with a fork when the whisk she wants to use goes missing. Chad isn't quite as successful and lets Terrence's coughing fit take over the segment. 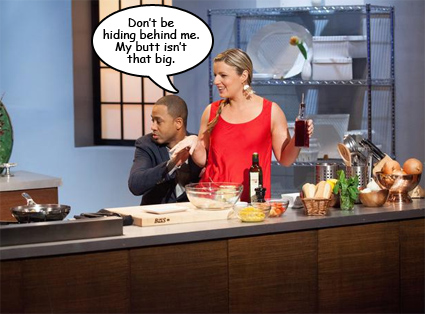 Damaris makes a poltergeist joke when a cake stand takes a noisy tumble off a shelf. Nikki shuts down when a fire alarm goes off. Rodney gets the bum's rush, but he manages to finish describing his sandwich in a coherent manner. Finally, Chris is just a bit too loud and strident.

Overall, Rodney's performance impresses Giada the most and she gives him an advantage in the next challenge - "4th of July Live," an obviously fictional 45 minute show. Each Wannabe is assigned a cooking station by Rodney, who tries to match his opponents to their weaknesses.

There are 15 minutes for prep, but all of the actual cooking will be on "live" television. Most folks are in the studio, but Chad is outside at a vegetable stand with Farmer Lee Jones, and Stacey is paired with adorable lesbian butcher duo, Amelia Posada and Erika Nakamura of Lindy & Grundy. 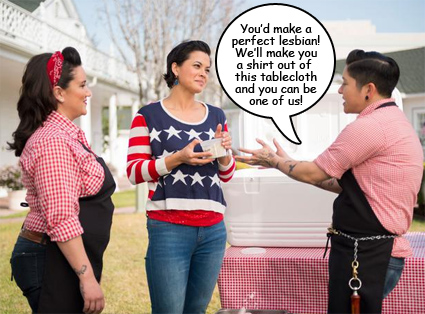 Alton and Bobby join Giada for this challenge, along with Bob Tushface. 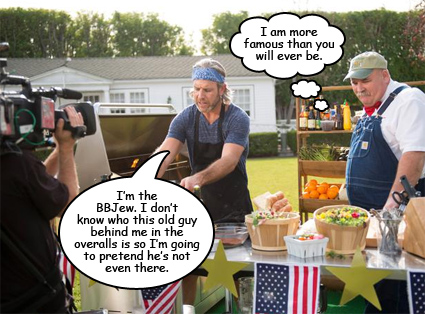 Chad starts things off - on the wrong foot. He all but ignores Farmer Lee until Alton asks about him. Oops. Viet has been stuck at the chips and dip table, and he's smoking some crab with cedar to add complexity to his dish. Unfortunately, his personality is flat. There's suddenly an urgent phone call from a woman who wants to know about his favorite dip trio. You can see the hamster in his head come off its wheel as he thinks, "Dips? I beat Bobby Flay on Iron Chef America, I don't make fucking dips! And where are the peppers?!" He has no answer.

Rodney doesn't do much better. He's making something with meringues. He's from Baltimore, and should know better than trying to make meringue in July, but hey, it's probably March and he's in LA and Pie Style knows no boundaries. His "live" caller wants a suggestion for a no-bake dessert, and Rodney babbles something about whipped topping and uses the word "sucker" at least twice while I'm shouting, "rice pudding! tapioca! watermelon!" at the TV. Whipped topping? As in Cool Whip? Sucker.

Nikki is making fried chicken for the very first time in her life, but she does a good job of sounding authoritative. Russell has reverted to his quiet, brooding self, but when Alton asks him to do a cut to commercial, he suddenly gets a personality. 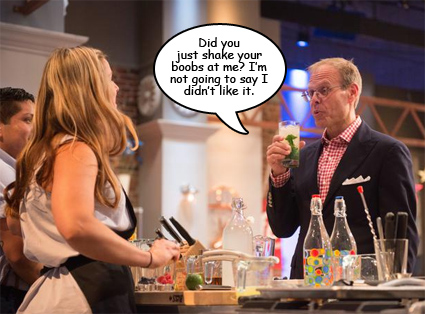 When they come back from commercial, Damaris seems to be attempting to seduce Alton with her Schuylkill fish house punch. She's apparently sampled many of her wares already. And you know - a "fish house" punch does not sound at all appealing to me.

On to Chris, who is making cole slaw and seems to know what he's talking about. Finally, Stacey does a bang-up job of making Lindy and Grundy seem like the real stars of her segment.

The "show" is over and the contestants put their dishes out for tasting. Alton, Bobby, Giada, and Tushface heap their plates with the offerings and prepare side dishes of Pepto Bismol and Tums. 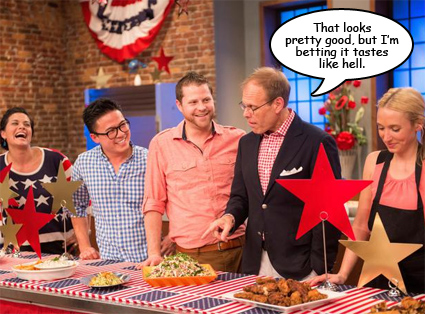 They love Chad's grilled vegetable sandwich, which redeems his bad presentation. They're also impressed by Nikki's first-ever fried chicken, and found Damaris' cocktail to be tasty. Stacey's mixed grill was a bit overcooked, but it tasted pretty good. On the bad end of things, Chris' cole slaw was weird, Russell's potato salad was both bad and weird, Viet's dip was underwhelming, and Rodney's dessert was undercooked but creative.

After both the food and personalities were taken into account, Stacey is declared the winner, despite seeming a little "too perfect." (Whatever that means.) Chad, Nikki, Chris, Rodney, and Damaris are safe, leaving Russell and Viet on the bottom. While Viet is cute and charming and a great cook and all that, he just doesn't come off well on-screen. Russell has his occasional bright moment, which saved his bacon. 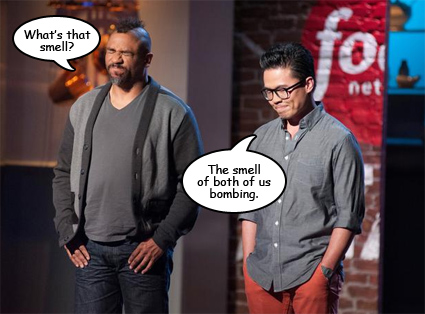 A shame. I liked Viet. Would be nice to have a real chef on Food Network and not just a personality that knows how to cook a little bit. But then, it wouldn't be the Food Network anymore, would it?