A couple of summers ago, I was all set to attend my first Fancy Food Show. It was in DC that year, a relatively short MARC ride away. But plans changed and I ended up spending the day with an old friend. This year, I was determined to go, even though the venue had changed to New York. I love New York, despite its nasty soup-like Summertime humidity, so I was even more excited to attend the event.

After a series of mishaps including a very late train into town and a taxi accident (I was not hurt), I made it to the Javits Center relatively unscathed (albeit sweaty). My first line of business was to check out the booth for José Andres Foods (which will get its own post), after which I simply walked up and down the aisles and checked out the products that most interested me. 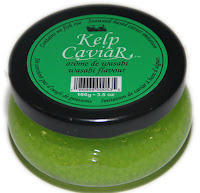 One of the more interesting products was a vegetarian caviar made from kelp. Kelp Caviar also offers the real deal, but the fake stuff was far more intriguing. There are eight flavors to choose from, including wasabi, balsamic, ginger, and truffle, and I found the tiny pearls to be somewhat like tobiko (the caviar one finds on sushi), only without the snappy texture. 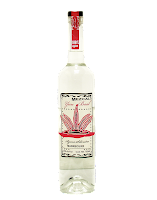 Spain and Italy were well-represented and offered a goodly amount of olive-related products. I skipped much of them in search of other nations to taste. As I walked through the aisles of Mexican-produced items, I noticed that quite a few of them were tequilas and mezcals. Despite the fact that it was still pretty early in the day, I admit to tasting a few of them. Among the best were the mezcals from Oaxaca. The Real Minero, brewed in earthenware pots, is reminiscent of a fine Scotch, intensely smoky, but with a familiar (to tequila drinkers anyway) agave fruitiness. Another smoky, but lighter and drier, mezcal is the Yuu Baal brand. These mezcals have only been available in the US for about six months, and right now in selected restaurants and liquor stores in New York. I meant to pick up a bottle before heading home, but sadly wasn't able to find the time for a booze-shopping expedition.

Fueled by alcohol, I was attracted to a sign that said "World of Chia," which I took to mean a booth of chia seed products. While Interfoods does have one raspberry jam-like product that contains the Omega 3-rich chia, the rest of their products were pepper purees and fruit pulps. Despite being warned that the habanero puree I was slathering on a cracker was "very hot," I popped it in my mouth anyway. Like I said - fueled by alcohol. When the rep asked if I was ok, I acted like it was nothing despite the fact that the right side of my mouth was on fire and smoke was likely coming out of my ear. I thanked him, took a card, and went off to find something creamy and sweet to kill the heat. What I found first was more alcohol - an astonishingly delicious cocktail made with avocado oil, lime, and cucumber by Junior Merino, the Liquid Chef. There were three or four other cocktails on offer, and while I really wanted to try them, or have another one of those insane cucumber ones, I hightailed it out of the spicy, alcoholic land of Mexico and stumbled into Canada.

Canadians are so nice. Not only did the lovely Marianne Pemberton of Vancouver's Ethical Bean offer me a sample of their coffee, she made me a latte. Ah....sweet relief! As I sipped, she told me about Ethical Bean's fair trade organic coffees and showed me their nifty free iPhone app that one can use to track their bag of coffee beans, from growing and picking to roasting, via QR code. And that latte was pretty delicious. Now they have to start selling their product here in the US, because shipping costs from Canada are pretty outrageous.

Another product I liked was Hammons Black Walnut oil. A Sofi award finalist in 2011, the oil has a black walnut flavor that is a bold change from extra virgin olive oil. If you've never tried a black walnut, well, it's a bit hard to describe exactly. It's walnutty, sure, but also darker and fruitier. "Earthy" is a good word for it. Black walnuts are a

wild crop that are hand-harvested, so of course they're a little more expensive than regular walnuts. But what was most surprising about the Hammons oil was that it's available at Walmart. Apparently they're big on exotic oils and sell a good deal of them. However, if you're like me and won't shop at Walmart, Costco also carries Hammons Black Walnut Oil and it can be purchased online at Nuts.com, too. I think it would be a dynamite substitute for olive oil in an olive oil cake.

As far as I'm concerned, one can't have too many sources for seasonings. The Spice Lab features 180 gourmet salts and peppers and were offering sample packs of their pink Himalayan, truffle, and applewood smoked salts. And if applewood isn't your thing, they also have salts smoked with Hawaiian guava wood, grape vines, cherry, alder, hickory, and Welsh oak. They also have exotic salts flavored with saffron, curry, herbes de Province, Thai ginger, and green tea. Just imagine the kick they'd give the garden variety margarita (or a fancier one made with cucumbers, like that one I wish I was sipping right now)!

There were many more interesting savory and liquid treats at this year's Fancy Food Show, but these were my favorites. Stay tuned for upcoming posts on some of the sweet goodies I sampled.