This week on Top Chef.... (can you feel the excitement?!)

The cheftestants file into the temporary Top Chef Kitchen to find Padma standing with guest judge, former Top Chef Masters competitor and all-around good guy, Tim Love, owner of Lonesome Dove Bistro. Behind them is a table chock-full of Don Sponsorio tequilas of every style and age. For the Quickfire Challenge, the cheftestants have to participate in a "tequila tasting," choose one, and then scurry off to create a dish to pair with it - all in 30 minutes. Wisely, most of the chefs seem to grab a bottle and go, rather than tasting the gamut. It's still early in the day and drinking tequila probably isn't the best thing to do that soon after brushing one's teeth.

Even so, Tim looks a bit disheveled, as if he's already had his own private tasting. And what's Padma wearing? Those yellow pants did such unflattering things to her ass. Or maybe her ass is just weird. 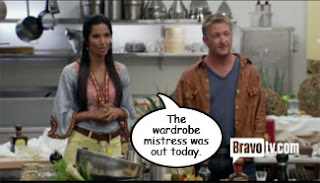 Sarah is all excited about tequila and tells us that she and her boss Tony Mantuano knock down a couple three shots of blanco tequila before they have to get on a plane. Lord help any flight attendants who try to stop those two from playing Words with Friends after the doors close. 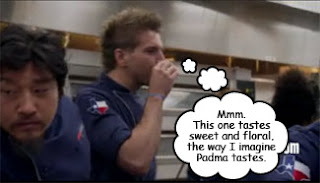 Thirty minutes are gone in a flash (even faster if one's been drinking) and Tim and Padma make the rounds. Tim's an old hand at this so Padma doesn't even have to prompt him to name his least favorite dishes. 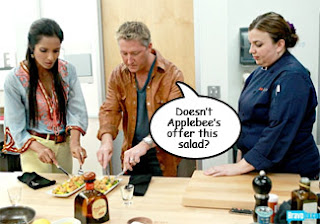 He thinks Heather's is too "chain restaurant," which cracks me up. She thinks so highly of herself and is still a bit cocky from last week's win. But this probably didn't knock her down the notch or ten her ego needs. Squinty Chris' chicken is a bit dry, and Sarah's risotto is undercooked. Guess she was doing more reminiscing about drunken flights than stirring her rice. 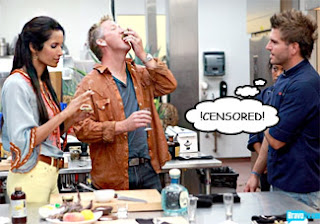 On top were Handsome Chris for his briny oyster (insert Padma joke here), Lindsay for her salmon, and Kal-El for his spicy Thai clams. Ultimately, Kal's dish impressed Tim the most, so he got the win and a five thousand dollar bonus. But...no immunity. 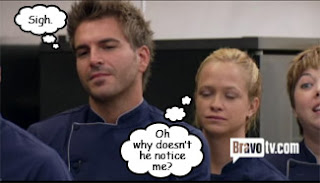 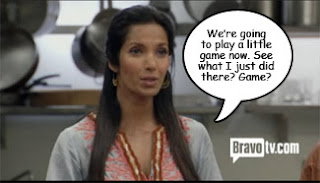 The Elimination Challenge gets a bit more complicated. Tim invites the cheftestants to a game dinner - and I'm not talking Pictionary or Scrabble - at his restaurant, only as the chefs and not the guests. The guests will be some fancypants celebrity chef buddies of his, including former Top Chef Master-testants Anita Lo and John Currence, and Brian Caswell, who didn't win Next Iron Chef a couple years ago.

Here's where the actual complicated part comes in: Padma pairs the chefs up where they stand. Lucky for Heather, she's standing next to her favorite person on earth, Beverly. And lucky for Beverly, there are knives nearby. Then Padma tells the chefs they are cooking a six-course dinner, with each course featuring a game meat favored by one of Tim's illustrious but non-winning guests. The chefs draw knives for protein assignments and it shakes out like this:

Still doesn't sound complicated? How about this: not only do the chefs have to cook for the celebrity chefs and of course the regular judges, they also have to prepare plates for each other. By my count, that makes...6+3+10 = 19 plates of food per team, unless the cheftestants are going to share. The judges will choose the winners, but the cheftestants get to pick their three least-favorite teams and put them up for elimination. The judges will then choose one of those teams to go home. That's right folks, a double elimination. 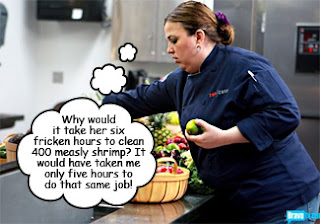 So the chefs go shopping and then hit the kitchen to prep their dishes. The whole time, Heather is acting like a raging bitch. She's bossing Bev around, not wanting to take her suggestions for the dish, and stirring up lots of...what's the opposite of good will? Animosity. Ed tells us he respects Beverly and that Heather is acting like "a complete bitch." But Bev is used to it. She tells us she had been in an abusive relationship in the past and when the bastard was at work, she left him. 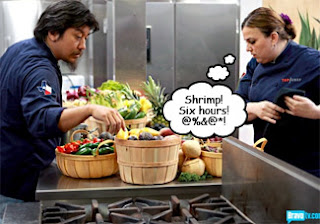 The next day, the chefs finish their dishes in the tiny and extremely warm Lonesome Dove kitchen, where they get to season everything with their sweat. Poor Bev is trying to cook duck breast while Raging Bitch is raging and sweating and breathing down her neck. Bev is clearly afraid of Bitch and I'm wondering if her fight or flight mechanism is going to kick in at some point very soon. Instead, Bev is asking questions, trying to appease the monster beside her. 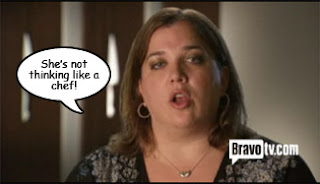 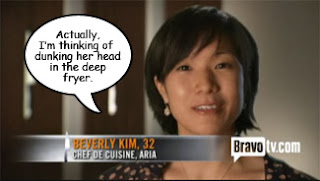 Lindsay and Handsome Chris present their boar dish first. Apart from his mooning around for Padma, these two are a nice, quiet, businesslike team. The judges say theirs is a nice plate of food, but it's not particularly exciting.

Bev and Raging Bitch go next and present rubbery duck with skin that's not quite crisp enough. I start hearing the sound of bus breaks screeching on asphalt.

Squinty and Grayson then present their elk dish. Squints had the idea to make a "chain" out of sweet potatoes, because it's something that he's done at Moto. But then he fucks up the potato and has to resort to making oddly-shaped fries out of it instead. One of the game-eatin' guests calls their plate, "1982 banquet food," which I'm guessing is not a compliment. Hasn't Squints learned from his "cigar" mistake a couple of weeks ago that he should probably just leave the Moto food at Moto?

Edward and Kal-El then present their quail which gets lots of praise. Yay! Ed's my favorite chef in the competition, but Kal is quickly becoming a favorite as well. Back in the kitchen, Dakota is having issues with her venison. While it looks nearly black on the outside, she's worried that it's not cooked through enough. She panics and goes to Nyesha for help, who basically thinks that Dakota is a big girl and should figure it out for herself. Meanwhile, Nyesha's making a gratin. Even though last week someone went home for making a gratin, and someone even questioned why a gratin would be served in 500° weather. As far as I can tell, it hasn't gotten any cooler.

As it turns out, the gratin is the best thing on the plate. Not so great is the nearly raw venison.

Finally, Paul and Sarah present their thquab, which is called "a nice plate of food." 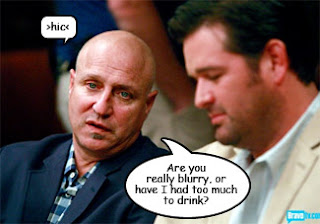 Immediately after noshing, Padma comes into the kitchen and calls out Ed and Commander Zod. They are the winners of the challenge and are awarded $10K to split between them. 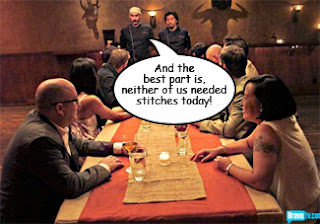 Then those two go back to the kitchen to thquabble over who should be thrown to the wolves. Dakota and Nyesha are pretty obviously the bottom of the heap, and eventually Bev and Bitch and Thquinty and Grayson are voted off the island as well.

When they face the firing thquad, Tom asks Bitch and Bev if they think they deserve to be out there. Bitch says she's only out there because the other chefs are jealous that she won the last challenge. Or maybe they just want to see her bossy ass gone. And then she lays into Bev about that last challenge and how it took her two days to peel and clean 400 shrimp. Not that it made any difference, since Bev's dish was neither a winner nor a loser, and Heather wasn't even on her team. Dakota comes to Bev's rescue and defends her worth ethic.

The judges are annoyed and dismiss the bunch of them. Tom says they don't really give a crap about the petty thquabbles between cheftestants and the judges need to base their decision on today's food. Dakota and Nyesha's venison was clearly the worst of the bunch, despite their good side dish, so those two go while Raging Bitch lives on. Arrgh!

Next week: the cheftestants head to Austin, Patti Labelle howls like she's in pain, and Emeril finally makes an appearance as a judge.