I'm not really feeling the recapping mojo today, so let's make this short and sweet. Ok, maybe not sweet. But definitely short. Shorter than usual.

This episode begins with scenes from last week's post-chili-cookoff aftermath, while Squinty Chris is still wiping tears from his face with Richie's molé-stained bandanna. Padma tells the tired cheftestants to go home and get a good night sleep because tomorrow they will be packing all of their shit into three ugly Toyota minivans and driving five hours to Dallas!

One van is being driven by Heather, and another by the Cowboy from the Village People. No wait - that's Jor-El in a cowboy hat. On the way north, they get to know each other better. Handsome Chris reveals that not too long ago he weighed 70 lbs more than he does now. He lost the equivalent of an entire Padma!

Near Dallas, they  encounter a roadblock set up by the Texas Highway Patrol. And Bravo. Dakota immediately starts panicking and thinks there's a warrant out for her arrest because of a sizeable ticket she has not yet paid. Everyone else frantically stubs out their doobies and fans the air, but it's too late - they are forced to turn off the road into a scrubby cornfield...

...where Padma is standing with this week's judge, the handsome and toothy New Orleans chef who lost both Next Iron Chef and Top Chef Masters, John Besh. 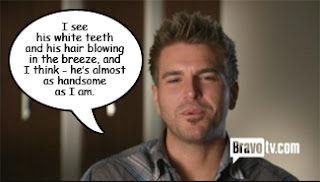 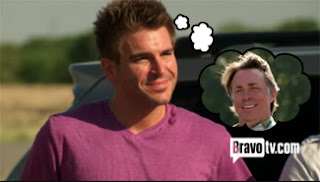 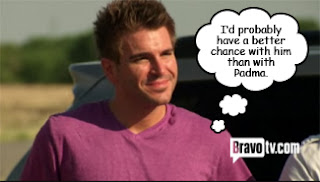 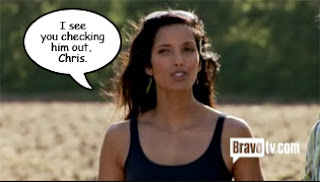 Padma tells them that this is the site for their Quickfire this week, and that they will be using materials found in the "survival kits"--that have miraculously appeared in the backs of their vehicles--to create a fabulous dish in 30 minutes. 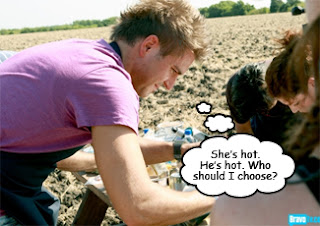 Armed with only crackers, jerky, pen knives, and their teeth, the chefs set to work. When time is called, Padma and John go down the line tasting and grimacing, tasting and grimacing. Eventually they decide that Whitney, Dakota, and Handsome Chris produced the grossest dishes, while Ed, Lindsay, and Chuy come out on top.

Ed refused to make what he called "Flintstone food" and whipped up a pretty elegant-sounding Thai peanut soup with a nori-wrapped crab cake on top. (Nori in a survival kit?) 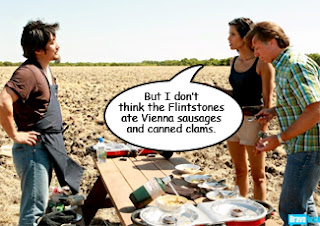 But the winning dish belonged to Lindsay who used canned Vienna sausages and saltines. As Ed looked on incredulously, she was awarded not only immunity but also $5,000. For Vienna sausages. And one can feel Ed's murderous rage building.

Padma then tells the cheftestants that once they get to Dallas, they will be preparing a progressive dinner for three couples who live in Dallas' posh Highland Park neighborhood. She puts Squinty Chris, Sarah, Paul,  Whitney, and Lindsay in the group responsible for appetizers; Beverly, Jor-El, Nyesha, Heather, and Chuy get main courses; and Dakota, Handsome Chris, Ed, and Grayson get desserts.

They meet with the vapid, shallow, nouvelle riche, McMansion-dwellers for whom they will be cooking. (This is smelling like a Bravo tie-in for yet another Housewhores show to me.) One of them is a "Lifestyle specialist" or somesuch ridiculous non-profession for people who have more money than taste. She tells the appetizer cooks that they were briefly contemplating a theme for the party - pink food. But then that bitch Lisa Vanderpump from the Housewhores of Beverly Hills stole the idea and used it for a challenge on Top Chef Just Desserts, one-upping them by dressing her little dog as a Chippendale dancer and making him strip for the guests.

God, that ruined everything.

After meeting their clients, the cheftestants head out to shop. While this whole sickening mess seems like a team challenge, the chefs are actually competing against each other this time, as God intended. One whiner winner, one loser this week. 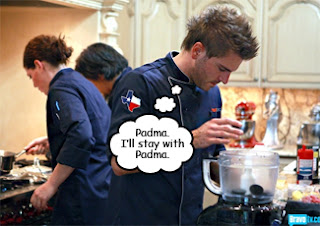 The appetizer group goes first, serving the three couples, John Besh, Padma, Tom, and Gail Simmons. I could have sworn that the chefs were told to prepare 12 portions of everything, but that's only ten guests.... Anyhoo, Squinty Chris thought he'd be cute by making an app shaped like a cigar, complete with ash. He was the only one who liked it. 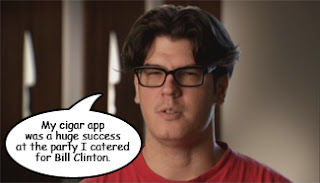 Paul made Brussels sprouts, which, surprisingly, everyone adored. Sarah's artichoke appetizer was also well-received by the group.

On to the next McMansion for entrees. 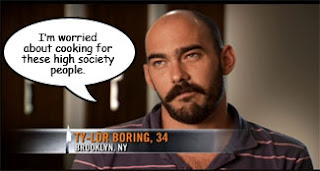 Kal-El, don't you worry your pretty little bald head. These folks are about as "high society" as the Beverly Hillbillies. Just be nice to them and maybe they'll let you take a nice refreshing dip in their cee-ment pond later.

But he did have reason to worry, not about the "society" mavens, but about the Real Judges with Real Taste who ding him for having too much on his plate. John Besh complains about Jax-Ur's knife skills, too. Nyesha's filet - which looks perfect - is a bit underdone for the housewhores, who prefer their meat dead. But they seem to enjoy Chuy's horribly overcooked salmon and goat cheese thingy stuffed in a corn husk. The Real Judges, on the other hand, do not. 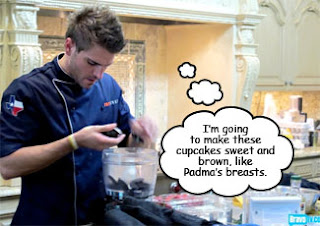 And then finally on to desserts. The kitchen that the cheftestants get to work in is completely over-the-top hideous, with too many moldings and columns and whatnot cluttering up the cabinet doors. It looks like what someone without any taste at all would think was classy. The husband of this couple is a short sugarholic, while his wife, unsurprisingly, is bleached blonde and stupid. They love Handsome Chris' cupcake, which Tom hates so much he refuses to make comment at all. And they don't get Ed's amazing-sounding panna cotta with cantaloupe consommé and raspberries stuffed with basil pudding(!), calling it "too jiggly." Kinda like what the hostesses butts musta looked like before their liposuction.

Anyhoo...that stupid and painful part of the show over, the judges shoo the vapid people away and take over the dessert house dining room. Padma then summons Sarah, Grayson, Paul, and Dakota to Judges' Table. Their two apps and two desserts were the favorite dishes of the evening. Dakota, who worried about the texture of her bread pudding, was pleasantly shocked, but she did not win. That honor went to Paul, for his Brussels sprouts.

He won for Brussels sprouts. That's kind of amazing. Even more amazing than winning for Vienna sausages and saltines. 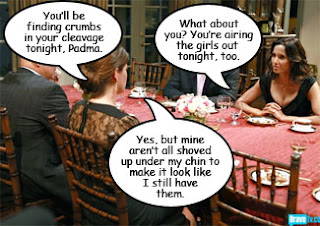 Padma then told them to send out some of the others. Literally, she says, "please send back some of your colleagues." She didn't name any names, and I think it could be really fun if the winning chefs did exactly that. 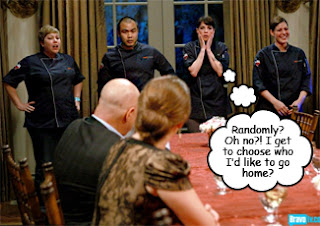 Handsome Chris, Squinty Chris, Chuy, and Commander Zod prepared the worst dishes of the evening. For the most part, it seemed that overthinking and plating were the major problems for three of them, but Chuy actually had some real execution flaws in his overcooked fish. And for that, he got sent home.

Next week, the chefs visit the Ewings at Southfork Ranch, and Jor-El cuts his hand.