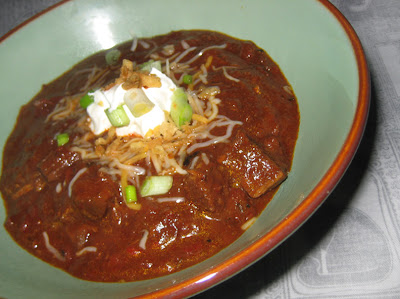 I seldom use the same recipe twice. I don't use a recipe at all, actually, I just toss ingredients into the pot, tasting frequently, until the flavor profile matches the one I keep filed away among the other junk cluttering my brain. So no matter what I put in my chili, it tastes pretty consistent from batch to batch - meaty, tomatoey, somewhat sweet, and only barely spicy. This time, I thought I'd try something completely different.

Uncharacteristically, I used a bunch of dried whole chiles. I removed most of the seeds after soaking them, and I'm glad I did because their fumes nearly choked me in the process. I like spicy stuff, but I don't want my mouth (or any other body part) to burn. I also wanted the chili to have a predominant smoky flavor, so I used chipotles, fire roasted tomatoes, smoked paprika, and even a little smoked salt at the end to finish it.

It was darn tasty, and a perfect accompaniment to a Ravens victory.

In a dutch oven, brown meat in batches. Remove meat and add onions and a pinch of salt. Stir well to pick up any browned bits from the meat. If there doesn't seem to be enough fat, add a dribble of olive oil. Cook onions over medium heat until they are beginning to brown.  Stir in cumin and coriander.

Add meat back to pan along with garlic, combining well. Cook for about 5 minutes, then add molé, pepper purée, tomatoes, and beef broth. Bring to a boil. When mixture comes to a boil, turn heat down to low and simmer for about 3 hours, or until beef is very tender.