This week, the story begins with the chefs still sweating and cursing in Tim Love's tiny Lonesome Dove kitchen. Padma comes in and tells them she wants them all to pack their knives and go. Seriously, they had to pack their knives - clothes, toiletries, Squinty Chris' hair scrunchies, Handsome Chris' hair spray, Heather's SuperBitch3000 vitamin supplements, etc. - and head on to Austin.

On the road, Ed mentions that there had been several handsome judges this season. (What's with all of the metrosexual competitors this season?) He then asks Heather - who, as a bitch is obviously lonely - if she would rather do John Besh or get $5,000. She chooses the man over the money. Poor John Besh. In the other car, the girls are teasing Handsome Chris with his nickname, "Malibu." Because he's pretty and (fake) blonde.

Anyhoo...the cheftestants settle into their rooms at the Hotel Driskill, then suit up and head to the Cordon Bleu, which again will be their temporary kitchen for this leg of the Tour O' Texas. Tom has joined Padma in the kitchen for the Quickfire this week, which seems to alarm some of the 'testants.

Because the "social media phenomenon" (aka, something with which to avoid doing any actual work) Twitter was unveiled at SXSW in Austin in 2007, this Austin-based Quickfire is going to be dictated by real-time tweets from fans. But not really "real time" as this was filmed in the summer, so I hope none of you bozos got out your phones during this challenge.

The first tweet chosen requires that the chefs make something with bacon. Padma gives them 45 minutes, and the cheftestants are all happy that they've received an easy challenge. 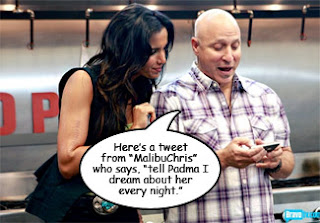 But then Tom pulls up a second tweet that requires the chefs to create a hash as a component of their bacon dish.

And then finally, each chef has to grab an ingredient and hand it to another chef. 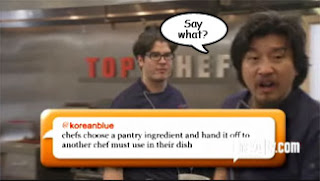 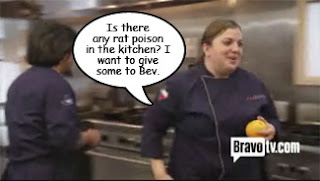 After time is called, Padma and Tom taste the chefs' dishes. They are not particularly fond of Grayson's "shrimp puff," Squinty's overly-salted scallop dish, nor of Ed's hash, which was burnt. On top were Beverly's pressure-cooked pork belly, Sarah's burrata-stuffed squash blossom, and Paul's winning dish involving clams and blackberries. Padma tells him that while he's just won ten grand, he gets no immunity in the next challenge. Tom jokes that with the $30K Paul has won so far in the competition, he needs to buy everyone a drink. Then he says the first round is on Bravo and the chefs should meet that evening in the hotel bar. 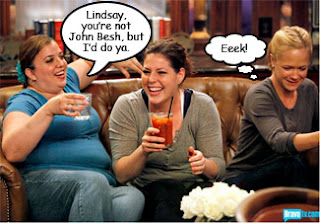 Later, in the bar, the cheftestants are getting liquored up. Ed remarks that the male and female chefs seem to be segregated, so some of them switch seats. Poor Handsome ends up between Grayson and SuperBitch, which makes him sweat even more than the sultry Austin air. 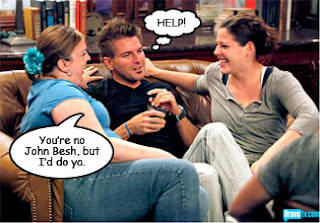 After a few moments of shenanigans, the piano player announces the legendary Patti LaBelle, wearing a sleek black wig and what looks to be creepy green contact lenses. She then proceeds to destroy Lady Marmalade. And not in a good way. 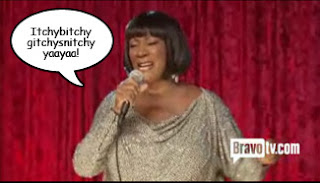 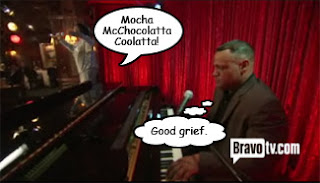 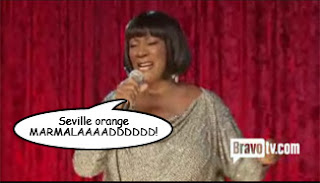 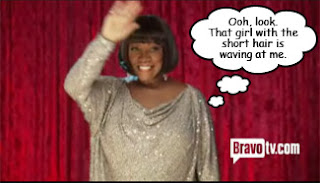 Yeah, I know it's her song, but what she did up there would be better called "interpretative warbling" than "singing." The chefs politely applaud, and Sarah seems to be having hot flashes, as she's constantly fanning herself. 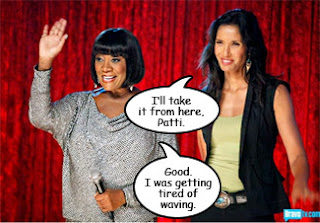 Padma comes out on stage. It would have been amusing to see her attempt a duet with LaBelle, but instead she tells the cheftestants that they will be cooking a dinner for Patti and her friends. Each chef must think about their first culinary influences and create a dish to honor this cooking inspiration.

After 30 minutes of shopping, the chefs head back to the Driskill where we are mooned by Squinty Chris. Handsome Chris alerts him to the problem by saying, "crack kills." And thus ends another appetizing food show interlude.

The next day, the chefs have two hours to prepare their dishes in the Driskill Grill kitchen. While they are cooking, we hear about the people who inspired them culinarily - mostly parents and grandparents, apart from Jor-El, who was most inspired by his Japanese nanny.

Meanwhile, in the dining room, Padma and Tom enter with this week's judge Emeril Lagasse, plus Patti LaBelle (in an entirely new wig) and her "friends" - her pianist and a skinny girl who's probably a backup singer. She must have scared off her other friends with her interpretive warbling. 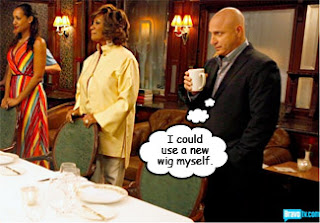 The dishes are presented in pairs. First are Squints and Super Bitch. SB has made beef Stroganoff, that she fancied up with rib eye. Only the rib eye was spongy and weird. Emeril can't even figure out what cut of meat it is, and LaBelle calls it "Bigfoot." Paul and Sarah present next, and the judges rave over her stuffed cabbage, saying it was nice and light. Paul's dish also garners praise. Handsome and Beverly are next. His salmon is leaking albumen, which Tom attributes to being cooked too fast and too hard. In  my experience, it also comes from frozen salmon, no matter how it's cooked. Unless there's salmon in the Gulf, I'm betting that the salmon Handsome used was frozen and then thawed at the store. Beverly's Korean short ribs with edamame purée are delicious, and I'm hopeful that she wins and Heather gets her bitch ass kicked off the island this week. Lindsay and Ed go next. While her dish is good, it's a bit too rich with butter. Ed's bibimbop, the only vegetarian dish of the evening, is a huge hit. Finally, Kal-El and Grayson bring out their dishes. Kal's fried chicken strips are gorgeous and delicious, but Grayson's humongous rib-eye is both boring and poor-textured. 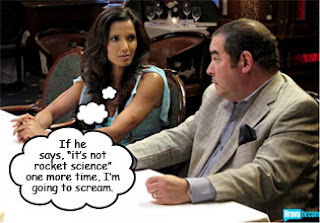 Padma calls out Grayson, Handsome, and SuperBitch to face Judges' Table first, which confuses all of the chefs. In a wee twist, these are the bottom three. They get dressed down and sent back to the kitchen to retrieve Ed, Sarah, and Beverly. These three get praised and Sarah is awarded the overall win for her stuffed cabbage. Back to the kitchen they go, and the bottom feeders are sent out once again to face the firing squad.

Happily, SuperBitch's nasty spaetzle and weird steak are enough to get her the boot right in her big fat keister. And the season's biggest drama llama is no more. Whee! 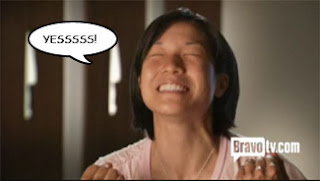 Next time: Sarah gets the vapors and takes an ambulance ride. And there's BBQ, too.