Our second episode begins with the obligatory scenes of cheftestants eating breakfast/doing yoga/brushing up on their "throwing under the bus" skills, after which we see them head off to the Top Chef Where's the Product Placement? Kitchen at the Washington Hilton. There they find Padma with special guest judge Sam Kass. Who? Well, um, he's an "assistant" White House chef. Not the head chef, but an assistant. In other words, he's probably in charge of Bo's dinner.

Because this is DC, the show uses any excuse to make a stupid pun about politics, so the first challenge of the day is called the "Bi-partisandwich" Quickfire. The chefs must work in teams of two, as determined by the Knife Block of Doom, and create a great sandwich in 30 minutes. But that's not all folks - there's a crack-tastical twist: the pairs must don a special two-sided Pushmi-Pullyu apron. It's a one-armed version of a one-legged race. 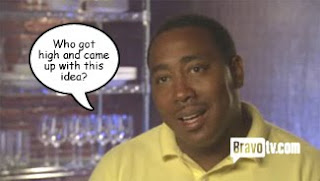 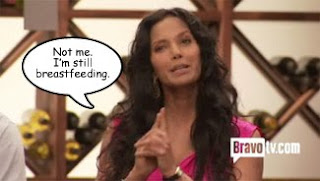 :::shudder::: That put a really unpleasant image of David Spade in my mind. Nasty!

Amanda gets paired with Tamesha, Stephen with Jacqueline, Ed with the Alpha Male, Alex with Tim, Arnold with Kelly, Lynn with Tiffany, Andrea with Kevin, and Inigo with Tracey. While the cheftestants bitch and moan about the situation, Tracey sees a silver lining in her pairing with Inigo. On whom she has a wee crush - hey, a gal loves a swashbuckler! 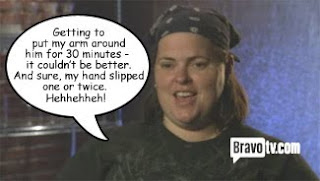 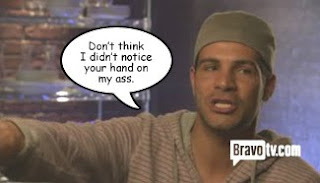 For the rest of the cheftestants, the theme of the contest seems to be trust. As in, "I don't trust my partner with a knife in his/her hand." 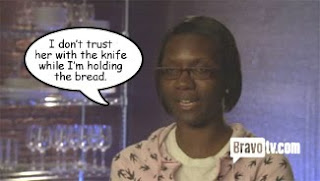 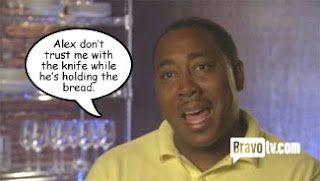 Amazingly, nobody gets cut, nobody dies. And sandwiches get made.

Sam Kass picks the teams of Stephen/Jacqueline and Lynn/Tiffany as creators of the weakest sammies. On top are Tracey and Inigo, and Alpha Male and Ed. Kass gives the win to Tracey and Inigo, extending his win streak to three in a row. With the win, the pair gets immunity from elimination in the next challenge.

Speaking of which, for the Elimination Challenge, the cheftestants get to participate in a cause that's important to Chef Kass and the Obamas - fighting childhood obesity. This makes me wonder why Chef Jamie Oliver wasn't involved in this episode somehow, being that this particular fight has become part of his life's work. Anyhoo, the cheftestants team up in sets of four to prepare a delicious and nutritious lunch for 50 kids at Alice Deal Middle School with a budget of $130 - basically $2.60 cents per child. This is about the same amount our government allots for the National School Lunch Program because there's no money left to feed our children after flushing most of it down the festering toilet called the Iraq War. And China will only let us borrow money to bail out the fat cats in the banking and auto industries.

First the teams get a little time to plan their menus. Kelly shows herself as quite bossy and perfectly willing to take all of the credit for her team's potential success. But will she take the fall if things go wrong? Doubtful. 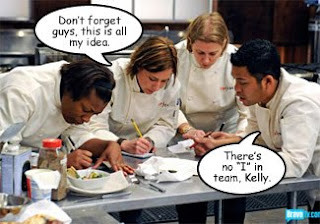 After squabbling over who makes what and why, the chefs get their petty cash and head to Restaurant Depot for shopping. Amanda wants to make chicken in a sherry jus. Really? She wants to feed alcohol to children? It's a myth that all alcohol burns off during cooking. Even after one hour of simmering, 25% can still remain. While Amanda is throwing her team's $ away on hooch, Jacqueline can't afford the chocolate she wants to use for dessert and has to resort to unripe bananas. 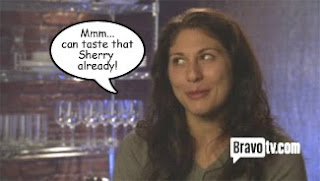 After shopping and 2.5 hours of prep, the chefs pack up and go home. There, Arnold stages an intervention with the rest of his team to tell Kelly that they don't appreciate that she's going to take all of the credit for everything. Kelly pretends to be flabbergasted at the accusation. Meanwhile, she still plans to bask in all of the glory. Truth be told, the entrée *was* Kelly's idea.

The next day, the cheftestants head to Alice Deal and deal with squeezing their 16 butts into the 4-butt kitchen. 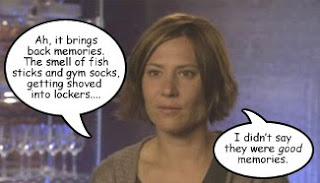 With one short hour for prep, Inigo is overly concerned that he can't get his foamer to work for his peanut butter mousse. Vizzini is dead, so there's no brain to puzzle out the fact that there's no need for such preciousness as foam in a school cafeteria.

Inigo tries to borrow a gadget from Team Manly, but gets shot down by Kevin and Andrea. 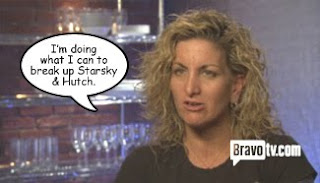 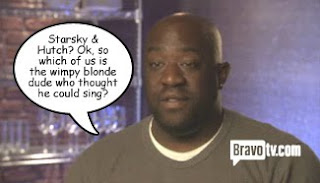 And who gets to wear the old man sweater?

Meanwhile, elsewhere in the cramped kitchen.... 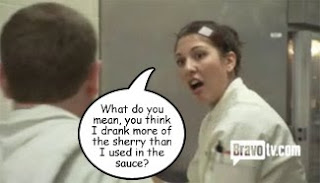 Everybody knows any Sherry in a public school rightfully belongs in the secret stash in the teachers' lounge. What's this world coming to? Next they're going to be telling us that ketchup is not a vegetable!

Lunchtime! The chefs serve their fare to the hungry kiddos and the judges come out to taste samples from each team. The mac and cheese is the low point of Team Manly's offerings. On Team Winners, Ed's sweet potatoes are far too peppery for a child's palate. On Team Losers, Jacqueline's dessert was too sweet. And Team Kelly Girly did well all around. 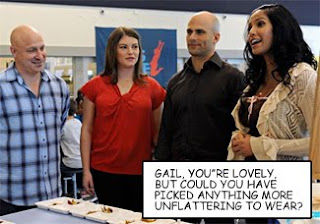 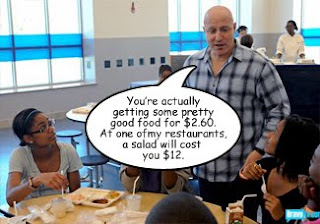 We then see the chefs in the Where's the Product Placement? Stew Room, worrying about their fates. Padma walks in and with her undertaker voice announces that she wants to see the members of Team Winners and Team Losers at Judges' Table. At this, Kelly gets miffed because Padma usually calls out the winning teams first, meaning her team must not be a winner.

As it turns out, Top Chef has switched things up for the first time in 7 seasons and the first group to face Judges' Table comprises the worst performers in the challenge. Amanda gets called out for her use of Sherry and Jacqueline for her overly-sweet banana pudding. Team Winners gets called out for its lack of vegetables, particularly for Alpha and Ed noticing the missing green stuff but not pushing to include it. Then these two last-place teams squabble with each other about peanut butter and Sherry and sugar for a few minutes before Padma dismisses them.

Back in the stew room, Inigo takes Tracey aside and tells her in confidence (but with cameras rolling and mics on) that he "doesn't like" Alpha. Meanwhile, Team Girly is sent out to face the judges. 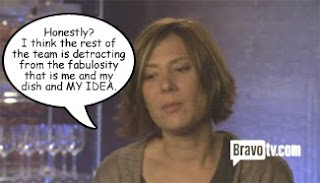 There they are complimented on their dishes, the number of vegetables, and their creativity. They made the best lunch, and Kelly is given the win for her carnitas. Her head immediately swells to such proportions that the set medics are called in with the jaws of life in order to extract her from the room in one piece. 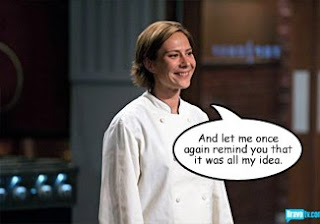 One more time we see chefs pulled out before the judges. Ed, Alpha, Amanda, and Jacqueline are the bottom four and after some back and forth, Jacqueline is told to pack her knives and go. How sugary pudding is worse than plying kids with booze is beyond me, but what do I know?

Next week: picnic time! Instead of a traditional Elimination Challenge, hungry bears will be invited to the festivities. (Hey - a girl can dream, right?)
Posted by theminx

Oh my goodness, I didn't realize this was on yet. Darn it. I have my DVR set for it, but I guess it needs to be updated. Thanks for the article. I am going to see if HULU.com had episode 1 up yet.

I just realized I have the top Gail's wearing at the elimination(in a different color). Banana Republic. Impulse buy. Poor choice -- makes me look triangular and flat chested -- so I feel Gail's pain.