This week's first episode of the Next Food Network Star was two hours long, and, surprisingly, it was not excruciating (well, not too). In fact, the show has become very much the rip-off of Top Chef, albeit with less-polished competitors. Like Top Chef with clowns. It's so Top Chef-fy, they have now named the second challenge of the episode (it's the "Star Challenge," because "Elimination" was already taken, and they don't want to copy) and Bobby Flay puts on his whites for a sniff-n-sneer a la Tom Colicchio. There's also a spiffy new "Food Star" Kitchen, no doubt stocked with product placements. The one big exception is that, unlike TC, TFNS does have a mentor figure this season, in the lollipop-like form of one Giada De Laurentiis.

On with the show. There are twelve new competitors this season, the "Wanna-Bes": Aria, Dzintra, Brianna, Tom, Aarti, Paul, Herb, Brad, Serena, DAS, Doreen, and Alexis. I'm not going to go into their individual personality quirks at this time because we've only just met and I haven't started hating anyone yet. In due time, my friends, in due time.

After the obligatory Top Chef-esque scenes of the cooks arriving at their shared home and meeting the others, they find a note that directs them to the Food Star Kitchens. There they meet Bobby Flay, resplendent in Bozo-orange hair. Like I said, Top Chef with clowns. 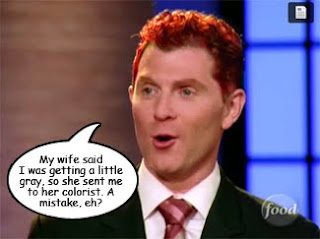 Immediately the Wanna-bes get their first challenge, which is to create a dish with chicken and potatoes in 45 minutes. Essentially they need to take these basics and transform them into a bit of their personality on a plate. But with less bullshit. At this point we get to see how idiotic some of these wannabes are. Ok, I call them idiotic, but you may prefer to call them ambitious:

A furry-headed guy named Tom decides he's making gnocchi. In 45 minutes. With less than 10 minutes to go he still hasn't gotten his potatoes cooked. Fail. There's an obnoxious personal trainer guy named Herb who is, well, a personal trainer. 'Nuff said. A buxom Indian lass named Aarti (whom I call "Faarti" in my head because I am 8 years old) attempts to roast a whole chicken (again, in 45 minutes) and wonders why her meat is raw. And then there's DAS, who is completely hip fly ghetto cool in love with himself. His giant roulades, which he hopes will impress, also come out raw in the middle. 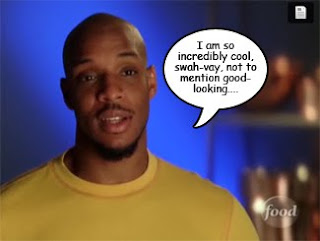 We're just going to let you believe that up until the time you get the DAS Boot. Das Boot! Ha! I'm funny. :)

After the cooking portion of the program is over, the Wanna-bes have to make a 20-second presentation to the camera while the Selection Committee tastes their food and makes unkind comments about it. 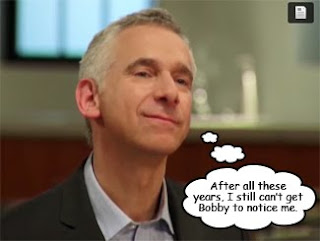 For the most part, everyone really sucks, especially DAS and Tom. Meanwhile, obnoxious Herb and a really normal-seeming, together, woman named Aria finish on top and get an advantage in the next challenge.

The next morning, the Wanna-bes travel to Paramount Studios for the first part of a two-prong "Star Challenge" in which they will shoot a 15-second promo for their own Food Network program. In past years, they have left this bit for later on in the season, so it's good to see that they've remembered that this show is not Top Chef and that they're trying to discover another amazing TV host like Aaron McCargo, Jr., or Amy Finley.

At Paramount, the contestants meet the illustrious Andy Fickman who will be their director. You know, the guy who brought us the classic "Reefer Madness, the Movie Musical." 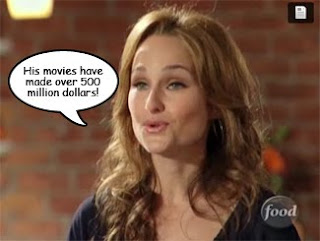 Didn't Avatar make that in its first weekend?

After fifteen minutes of planning and a trip through the Props department, the Wanna-bes then set to embarrassing themselves. It was quite amusing to watch DAS wave his arms at the camera and have Fickman mock him. The same goes for Paul's yelling. Giada calls fellow toothy Italian Serena, "puppetlike," but that may have been jealousy speaking.

When that uncomfortable train-wreck is complete, the Wanna-bes are presented with the second part of the day's Star Challenge - they must cater a 6-course lunch for a famous and mysterious celebrity chef. As winners of the first challenge - hell, let's call it the Quickfire - Herb and Aria choose teams and delegate courses.

After fifteen minutes of planning, one Wanna-be from each team goes shopping for ingredients, where predictably they either get the wrong things or can't find some items. While the shopping is going on, the rest of the chefs start prepping. Somehow Dzintra, an energetic blonde who has tried three times to make it on to NFNS, manages to get something in her eye while she's squeezing lemons for her zabaglione dessert. Not lemon juice folks, but a piece of plexiglas. How that happens we don't find out, but the Medic thinks her issue is severe enough to merit a trip to the Emergency Room. 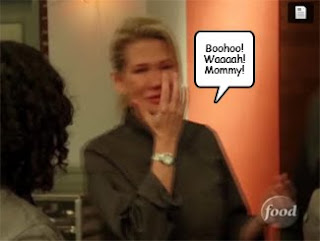 There's got to be a Matthew 7:3-5 joke in here somewhere.

Immediately we can tell that the Gray team is the most professional because Aria and Tom take over making a version of Dzintra's intended dessert, even though it takes some time away from their own cooking. Shades of Top Chef Masters here!

The next day, the contestants head to Cut, Wolfgang Puck's steakhouse (hmmm...shades of Top Chef Las Vegas), where they find out that the top secret celebrity chef is none other than...Wolfgang Puck himself.

After finishing their dishes in the Cut kitchen, the Wanna-bes each present their course to the Selection Committee and Chef Puck while being forced to watch their mostly God-awful promos. Some were a complete mess, but others showed some real potential. 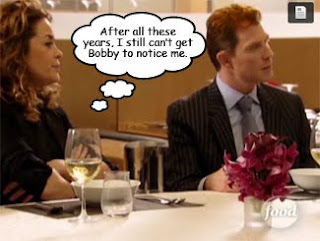 The Gray team goes first and doesn't exactly blow anyone's socks off, but Aria and (f)Aarti do well. Tom's promo is fun, and Dzintra returns from the Emergency Room to present a dish that other competitors prepared for her.

On to the Black team: Only Brad gets real compliments on his food, a salmon dish that worried him because he thought the salmon his team-mate purchased for him was sub-standard. Obviously if he can garner a compliment from Wolfgang Puck, the boy has some serious cooking chops. His promo, however, was rather dull. While Brad got compliments, Alexis - as far as we can tell, this season's sole member of Team Rainbow - gets clobbered for his raw-in-the-middle "beignets" which Puck calls "unacceptable." Maybe because they were really donut holes? And you know how Wolfgang Puck feels about donut holes.... 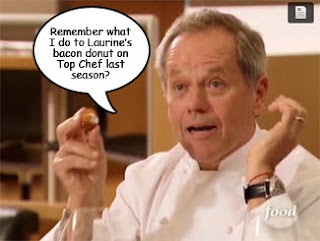 (He threw one across the room.)

Anyhoo...the teams leave Cut and head off to face the Selection Committee in a different venue. Flay, Bride of Fogelstein, and Tushface hem and haw about Dzintra and her eye issues and the fact that she didn't make her dessert. Her team - the Gray team - is the winning team, so her ass is safe. And Aria, who seems preternaturally self-possessed for someone who wants to be one of the Food Network's stable of buffoons talent, wins the challenge. This means the Black team is on the chopping block, and there are so many possibilities for elimination! DAS, Doreen, and Alexis ultimately end up as the bottom three, and while each of them was pretty bad, weepy Alexis gets the boot. 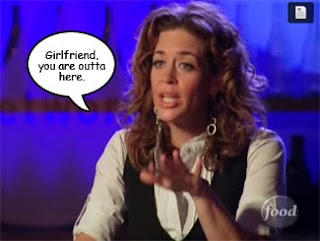 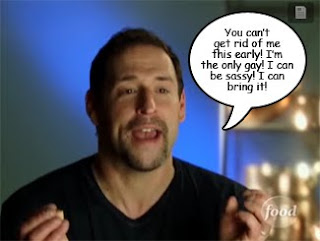 Although I love to laugh at these poor souls, I really did feel bad for Alexis. I thought Wolfgang Puck was pretty nasty toward a guy who looked like he was on the verge of a total emotional breakdown. It's one thing to rip apart professional chefs trying to win $100K, but to piss on a nervous novice who clearly was going down anyway seemed really mean. With Alexis out of the way, though, I can now enjoy watching these other jokers circle the drain!

Great recap..although I feel like you are being too kind!! I was kinda hoping that they would send them all home and start over!

I've never really watched a full season of this show, but the idea of "Top Chef With Clowns" made me LOL! Honey, you need to pitch that concept to the cable networks...

Great recap as always. I always look forward to your snark mostly because it makes me feel like I'm not alone.

Agree with you - I was completely taken aback at how much of a Top Chef ripoff this season is - even to the wanna-be stars getting into their big SUVs and heading off to the the market.

And somebody needs to tell Bobby Flay's hairstylist that that hair color does not occur in nature.

So glad to have wandered here from the FoodNetworkHumor site. You have been duly bookmarked.

I refuse to watch FN any longer. I made the mistake of attending the FN Food and Wine event last year...wow. Just wow. I am now firmly on Team PBS.