Product of the Week - Smoked Paprika 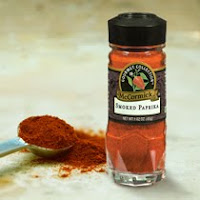 Smoked paprika has become quite the trendy ingredient of late. More and more I see it being called for in recipes by TV chefs and in cookbooks and food magazines. While pimentón is not such an exotic ingredient in Spain and around the Mediterranean, up until fairly recently it wasn't easy to find on American supermarket shelves. I originally bought mine from Penzeys, but have since found McCormick and Spice Island brands at the Superfresh or Giant.

Before trying it, I didn't know what the fuss was all about. I always thought standard paprika - the kind one sprinkles on top of devilled eggs as a garnish - had little or no flavor. Smoked paprika, on the other hand, lends a lively and of course smoky flavor to food. I like to put it on basically everything, because, like everyone's favorite similarly smoky-flavored pork product (that would be BACON), it's good in everything. Sure, put it on devilled eggs, and in egg salad. But it's great in chicken salad, in chili, and in a dry rub for ribs or steak or shrimp. Or vegetables. Anything that calls out for a bit of smokiness.
Posted by theminx

I have this and totally agree about regular paprika. You gave me some more ideas on what to use it on. Thanks. (PS try some Sambal in your deviled eggs).

Sambal? I can do that!