There's a new restaurant near the University of Maryland Baltimore campus, or maybe it's two restaurants? Heidi's Brooklyn Deli and Sisters Pizza & Mussels are in side-by-side storefronts on Eutaw Street, across from the Hippodrome Theater. They share a Web site and a communal back end space, but the food in both joints is quite different. Heidi's specializes in deli sandwiches made on house-baked bread, plus salads and breakfast. Sisters (the name is alternately spelled with and without the apostrophe on the Web site) serves up pizza and mussels by the pound, plus pasta dishes and salads. I'm going to talk about Heidi's here and save Sisters for a future post.

Sandwich shops are rife in the UMB area - Kirbie's, Café on the Square, Potbelly Sandwich Shop, Donna's, Subway, Jay's, and the UMMS hospital cafeteria all offer meat, cheese, and veg between two slices of bread. And let's not forget Mary Mervis, et. al., in the Lexington Market. To succeed with so much competition, a new restaurant that primarily offers sandwiches needs to bring something new to the table (or the desk, for us work-a-day lunchers). Personally, I don't like going to the Lexington Market because it's impossible to emerge from its depths without smelling like fried chicken and egg rolls. I don't mind smelling food while I'm eating it, but three hours later I don't need to be nauseated by the scent of grease in my hair and clothing. But I'm picky like that - YMMV.

Anyhoo...back to Heidi's. I'm always willing to give a new place a try, so a week or so after opening, I ventured over. I decided to try their chicken salad, which I usually consider a good indicator of quality. If some thought is put into such a basic dish, generally the rest of their offerings will be pretty good (feel free to refute this in a comment). Heidi's offers nine types of bread, but so far only a handful are offered at a time. I couldn't get my sandwich on my first and second choices of pumpernickel or marble rye, so I settled for whole wheat. The breads are baked on premises and taste pretty good, particularly toasted. When I eventually got some rye bread on another visit, I thought it was a bit too-thickly sliced (by hand), but that its thickitude would be great for breakfast with the simple addition of butter. And maybe some bacon jam.

Heidi's chicken salad gets points for using both dark and white meat chicken, as God intended. I don't get the concept of using all white-meat and then slathering it with mayonnaise. If the chicken is moist, less mayo is needed, at least in Minx Logic (but I've found that there are very few practitioners of my school of thought). Heidi's salad was a bit heavy on the mayo, but not ridiculously so. The seasoning was slightly sweet, and there were bits of celery in the mix. The portion was huge, and the price included a bag of chips and a pickle spear, so quite a filling lunch. Maybe not my number one choice of chicken salad in town (the hospital serves up an admirable version), but a pretty decent one. 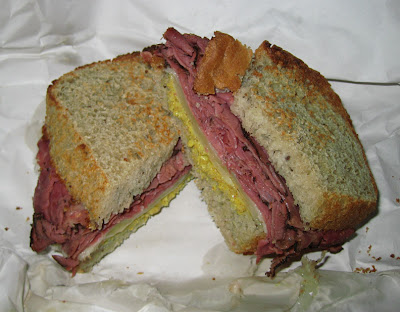 On my second visit to Heidi's I had planned to get the Eggplant Parmesan sandwich on a French hoagie roll. This time, they had my bread selection in stock, but not the eggplant, so I was forced to switch gears and ordered hot pastrami and swiss on rye. The pastrami was very lean, without the edge of fat that some of us appreciate, but it was also happily gristle-free and tender. If only the bread was thinner and the application of pastrami thicker!

When I was finally able to try the eggplant Parmesan (breaded eggplant, marinara, provolone cheese) a few days later, I was again wishing there was less bread and more filling. I ordered my sandwich on a French hoagie roll, thinking that the French style would be crispy, but it was fairly soft. No matter - all of the house-baked bread I've sampled at Heidi's beats Subway's by at least a mile. Maybe more. The eggplant/sauce/cheese combo was very good, with the most points awarded to the vaguely spicy, sweet-ish sauce which contained hunks of garlic. 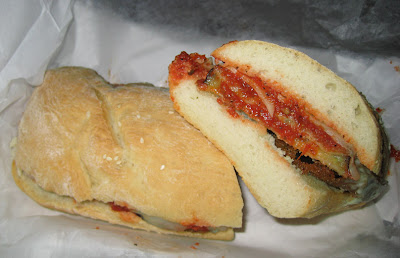 One of my favorite things about Heidi's is the bag of chips that comes with the sandwich. The sandwiches are so large, I couldn't possibly also eat chips, so I tuck them away in my cupboard for snacking on another day when my lunch isn't as substantial.

Eventually, Heidi's plans to open for breakfast, and hopefully by that time they'll have all bread and filling choices available every day. Until then, have a second choice in mind, and I hope you like bread with your sandwiches!

Mussels by the pound? I'm on the edge of my seat for the review of that place!

Considering they are $14.95 a pound, it might take a while before I get to the mussels. That's a bit more than my usual lunch budget.

Thanks the review - I still haven't made me way over there. I think I would want to get the pastrami, I love that stuff and hardly ever eat it!