We went a little crazy with buying vegetables at the supermarket last week. I think we've been eating too much meat lately and wanted to incorporate more green stuff into our diet. A head of cabbage became both kimchee and an important component of "bubble and squeak." A bag of broccoli slaw got the remoulade treatment. And a mess of string beans was combined with chicken to create a version of Chinese chicken with string beans.

I basically used the recipe for Kung Pao chicken from Land of Plenty, added a tablespoon of tobanjan (spicy fermented soybean paste) and substituted cashews for peanuts. And of course added about half a pound of trimmed string beans. 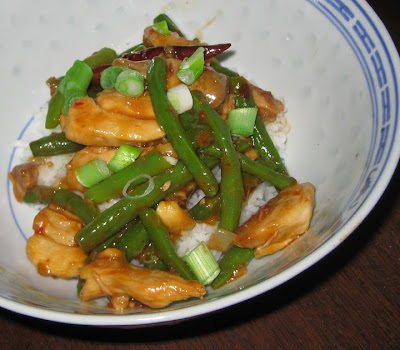 Although the sauce tasted really strong and spicy before I added it to the pan, it was a little lackluster after the watering-down it got from the beans. Probably could have added a little more salt, but no matter - it was still good, and the leftovers made a nice lunch for later in the week.
Posted by theminx