Lovely dear family friends from the U.K. were visiting last week and Dad thought it might be a good idea to get steamed crabs for dinner on Sunday evening. Mr Minx and I met Patrick and June at their hotel in Fells Point and determined that the two closest options were Obrycki's and Captain James Landing. We chose CJL because it was the nearer of the two. Although I had checked online and saw that the Crab House was apparently open the first week of May, that did not include May 2nd, so we were out of luck as far as steamed crabs were concerned. But we stayed to partake of the other crabby selections on the menu.

I had only ever eaten at Captain James once, and that meal was breakfast. My brother, father, and I had gone down to Fells Point to check out the aftermath of 2003's Hurricane Isabel. Watching people paddle down flooded streets in canoes worked up a hearty appetite, and Captain James was on dry land. Although the circumstances were memorable, the breakfast was not.

Flash forward to 2010. The kitschy nature of the establishment - it's shaped like a ship that just happened to run aground at the confluence of Aliceanna and Thames Streets - did not give me confidence that this dinner was going to be good. Nor did the somewhat depressing somber interior. But I was pleasantly surprised.

For starters we tried the clams casino, the calamari, and a crab dip special. The clams were a little hard to eat since everything in the shell was in little bits - the clam, the bacon, the bell pepper - and the curvature of the shell made it a bit hard for a fork to do its work. But the taste was fine. Would have liked more clam, less bell pepper, but that's just me. The calamari - both the familiar rings and a nice quantity of tentacles - was perfectly cooked, tender, and had just the right amount of breading. The clam dip was extremely rich, extremely gooey, and quite filling. Oh, and it tasted pretty good as well. 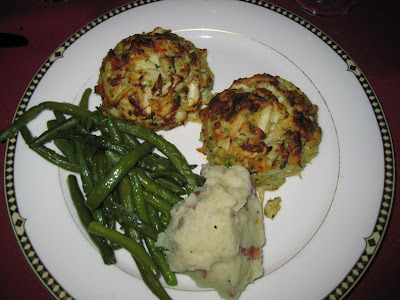 For entrées, four of the five of us chose the crabcakes. For a bargain price of $22.75, we each got two mammoth cakes, nicely seasoned (albeit not with Old Bay) with a high meat-to-breading ratio. And the crab tasted like blue crab, unlike some other cakes we had not long ago at another local seafood establishment. Sides were "seasonal vegetable" which turned out to be green beans that night, and rice, but Mr Minx and I opted for garlicky mashed potatoes instead. Our fifth diner chose the seafood combo platter which included a crab cake, a clam casino, an imperial-stuffed oyster, shrimp, flounder, and scallops. There were no complaints from that end of the table.

Although it's not likely Captain James Landing will become destination dining, I will keep it in mind the next time I'm in the area and want an enormous crabcake or two.

I really like the Captain James. The food is really very consistently tasty.

I love the breakfast ambiance on a sunny Sunday morning.

The waitresses are also very sweet, helpful and attentive.