Last week I was finally able to read through the penultimate issue of Gourmet. What stood out most to me was an article on Chef Edward Lee of 610 Magnolia in Louisville that offered an unusual recipe of sauerkraut soup with scallops - I have a genetic appreciation for sauerkraut and scallops have always been a favorite. The recipe sounded pretty straightforward so I thought I'd give it a try. 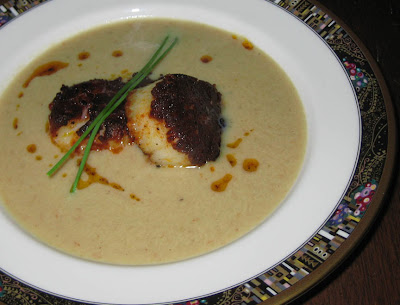 A word of caution: when blending the soup, the sauerkraut tends to clog the blade and send the juice oozing out of the blender lid. After a couple of unsuccessful pulses, I poured out most of the liquid and blended all of the solids into a paste, adding a few tablespoons of broth back at a time. The resulting puree was then stirred into the remaining liquid in the saucepan.

The spice rub on the scallops required sumac, a tart flavoring popular in Middle Eastern cuisine. I could have sworn I had some on hand, but couldn't find it. I substituted dried orange zest, which lacked the tartness, but since there was plenty of sour in the kraut, it worked well enough. And speaking of tart - the taste seemed a little one-dimensional, so two teaspoons of honey was added to the finished soup, rounding out the flavors yet adding no discernible sweetness.
Mr Minx isn't a fan of the scallop, so his portion was made with shrimp, which worked just as well. We were both happy with the end result. If one didn't know it was sauerkraut, it would be hard to pinpoint exactly from what the soup was made. 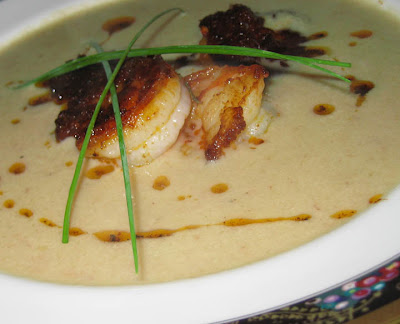 While the seafood worked very well with the soup, my brain can't help but concoct other variations using pork meatballs. And sliced frankfurters and croutons would make for a nice "deconstructed" dish reminiscent of a ballpark favorite. Croutons (particularly those made from rye bread) alone would make this a nice starter for a traditional Baltimore Thanksgiving dinner; sauerkraut always seemed odd and out-of-place next to turkey and cranberry sauce, but this creamy version has a favor that would seem to mesh better with the rest of the meal.
So...unusual, yes, but also delicious. And potentially versatile. Sauerkraut isn't just for kielbasa anymore!
Posted by theminx