When I saw the photo that accompanied the Baltimore Sun review of Umi Sake, a new sushi/pan-Asian restaurant in Cockeysville, I thought, "mmm...pretty sushi - wonder what it tastes like." The other night, I found out.
Umi Sake is in the building that used to house Pacific Rim, long our sushi restaurant of choice. When that closed a few years back, we started going to Yamato Sushi in Timonium, then to Sushi Hana on Falls Road because it was closer. After the sushi tour of Towson - which I wrote about here - we went to Kyodai. So many good sushi restaurants nearby! But we thought we should venture a bit farther north this time and give the new kid in town a shot.
The restaurant has been completely transformed since its days as Pacific Rim - it's rather plainly decorated but that is a welcome relief from the 80s decor it once sported. We ordered some green tea and took a few moments to peruse the menu with its description of fancy rolls. There's plenty of other non-sushi food to be had at Umi Sake, but we weren't interested in any of that.
We started off with miso soup that had a bit more flavor than most versions and a Korean seafood pancake, or pa jeon. The small, crisp-edged round had bits of shrimp, scallop and scallion with the satisfying spongy chew of a good pa jeon. 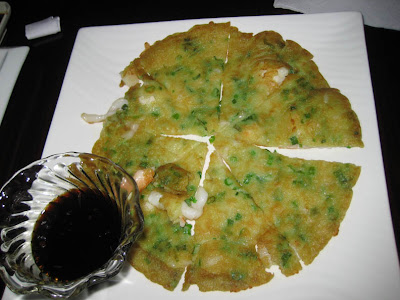 Next we had some nigiri sushi in the form of "white tuna" a.k.a. escolar, and regular tuna. Both fish were impeccably fresh and buttery. 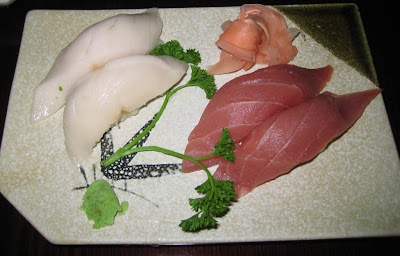 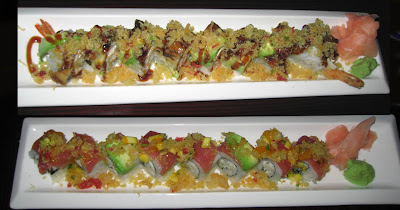 The next roll is the "Spicy Titantic" roll with spicy crab, cucumber, and cilantro, wrapped with tuna and avocado and finished with a sweet lemon chili sauce. Or that's what the menu said. The roll was sadly not at all spicy, nor did I taste any cilantro. And the "sauce" on top was actually bits of pineapple and mango. Mr Minx said he had a blast of citrus in his first bite, but I did not get any. That's not to say the roll wasn't tasty, just not what we expected.
Finally, we ordered the "Eight is Enough" special from the Sun photo: eight pieces of sushi, two each of four kinds, each piece in the pair slightly different from its partner. My favorites were the crisp fried rice cake topped with tuna tartare and either wasabi or spicy mayo (top row, 2nd from left, bottom row 2nd from right) and the tall roll topped with a mixture of crab, shrimp and scallop (top 2nd from right, bottom 2nd from left). 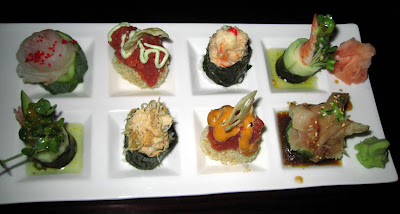 We were impressed. The seafood was very fresh, the rolls were inventive and fun to eat, and the service was great - our waitress was very attentive with the tea pot. And...the food was fairly cheap for fancy sushi. We're used to paying double digits for rolls like these elsewhere, but the most expensive fancy roll at Umi Sake is $9.50.
We'll definitely be making the drive to Cockeysville again.
Umi Sake
9726 York Rd
Cockeysville, MD 21030

There is (was?) a Korean restaurant in State College, PA, which has/had the best Pa Jun I've ever had . . . spicy pepper Pa Jun. But the Kimchi one at some nameless place here in Dallas is pretty darn good, too.