I got the idea in my head that I would make ravioli for dinner, using the fresh lasagna noodles I bought at Wegman's last week. So I whipped up a batch of filling using leftover pumpkin, some sweet potato, and ricotta cheese, and another batch with chopped beets and both goat and ricotta cheeses. Then I opened the package of pasta only to discover they were stiff as boards and nearly as hard as dry pasta. Mr Minx volunteered to go to the grocery store to pick up won ton wrappers, but there were none to be found.
I contemplated throwing everything away and calling out for pizza when I remembered seeing a recipe for pumpkin gnocchi that weren't pre-boiled before pan-frying. So I added flour to the fillings, rolled it into logs and lopped off bits which were then tossed into a pan of butter. I also tossed in some walnut bits and a chiffonade of basil. And garnished it with pomegranate seeds. 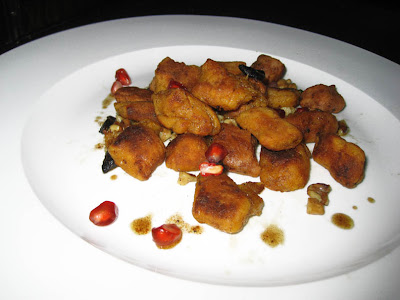 Ok, so maybe I was a little overzealous with the browning (it was dark and my kitchen lighting isn't all that great) - and there was too much textural similarity between the crusty gnocchi and the other stuff. But hey - it tasted good.
I had the forethought to freeze half the gnocchi, so next time I'll cook them for a shorter period of time to maintain some of the creamy texture (test gnocchi made a few hours before the actual dinner were perfect). And a cream sauce instead of brown butter might be a nice idea as well.
So how did your weekend dinner turn out?
Posted by theminx

We had some sea scallops in the freezer that I'd bought on sale a few weeks back. I had planned on baking them in a wine sauce with a light Panko breadcrumb topping, but since the weather was beautiful, I decided to grill them instead. The quickest thing to prep on short notice was teriyaki, since I had everything I needed in the kitchen. And the teriyaki was wonderful, as usual, but it completely masked the delicate flavor of the scallops. So note to self -- save teriyaki for meat, poultry, and more robust seafood and prep scallops with a lighter marinade.

:-) I keep telling my friends that though I blog about food, I'm not necessarily the best cook but I love food...why? Its ever forgiving nature! You'll get a chance to try again, so forgive yourself!