I've been cooking fairly involved meals for the past few weekends so I thought I'd make something more simple on Sunday, using whatever odds and ends of food we had on hand. And what's more simple than a creamy parsnip soup? 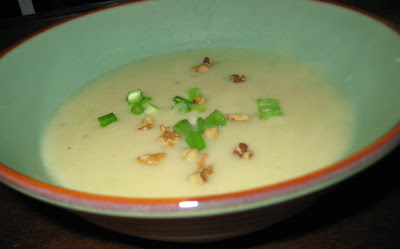 There are few ingredients but lots of flavor in my version:
Creamy Parsnip Soup
2 large parsnips, peeled and cubed
2 large red potatoes, peeled and cubed
chicken stock to cover, or 1 chicken bouillon cube and water to cover
1 clove garlic
2 - 3 cups whole milk
salt and pepper to taste
Place first three ingredients into a 3 quart stock pot or dutch oven, bring to a boil. Turn down heat and simmer until potatoes are tender. Allow to cool to room temperature. In multiple batches, place vegetables and stock into a blender with the clove of garlic and blend until smooth. Return purée to soup pot. Stir in milk to achieve desired soupy consistency. Salt and pepper to taste. When ready to serve, warm soup on low heat. Garnish with scallions and toasted walnuts.
I could have eaten just the soup and been happy. It was rich and sweet and creamy, yet somehow delicate, and the garlic added just the right zing of flavor. Mr Minx, however, always likes to have something meaty and starchy with his veg (even if the veg themselves are starchy), so I made a bacon pie. 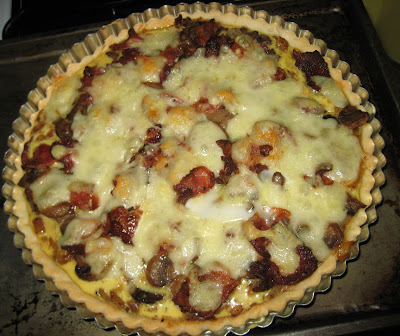 Bacon Pie
1 medium onion, chopped
1 box button mushrooms, sliced
1/2 lb thick cut pepper bacon
1 egg
1/2 cup milk
salt, pepper, cayenne, and nutmeg
4oz shredded cheese (I used Swiss)
1 all-ready type pie crust
Cook bacon until crisp. Remove from pan and drain on paper towels. Chop roughly and set aside. Discard all but 1 tablespoon of bacon grease and use it to sauté onion and mushrooms until onions are nicely browned and soft. Make sure to scrape up all the bacony brown bits on the bottom of the pan. Remove from heat and allow to cool.
Preheat oven to 375F. Dock and blind bake crust 10-15 minutes until light brown. Allow to cool to room temperature. When cool, schmear on onion and mushroom mixture, then add bacon. Top with cheese. Beat egg with milk, season with salt, pepper, a dash each of cayenne and nutmeg, and pour into crust. Bake 20 minutes or until cheese is starting to brown. Devour.
We of course had a salad on the side, just to say we had some non-starchy vegetables. But really - lettuce, cucumber, radish. Hardly real vegetables. Who are we kidding? :)
Posted by theminx