While last week's ravioli experiment was a failure, this time around it was a rousing success. See? Ravioli. :) 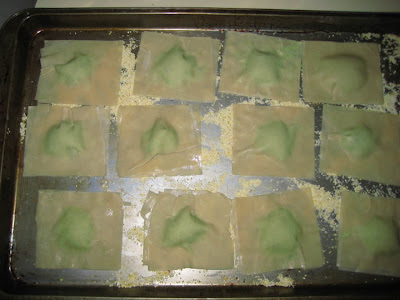 Rather than re-attempt the pumpkin and beet variations, I decided to do a riff on Mario Batali's Mint Love Letters with Spicy Lamb Sausage - I had peas and ground lamb in the freezer, and thanks to the warm weather we've been having, my mint plant was still putting out leaves.
I didn't have the extravagant amount of Parmesan cheese called for, but I had some leftover ricotta. And while the mint was still hanging in there, it was hardly flourishing; I put a bit of mint in the filling and saved the rest for garnish.

As for the sauce - without merguez handy, I made my own. To the pound or so of ground lamb I had, I added 1/2 teaspoon each of ground cumin, coriander, and fennel seeds, plus a half teaspoon each of smoked and regular paprika, three cloves of garlic, and salt and cayenne to taste. Precooking the lamb and draining off the fat meant I didn't have to constantly skim fat off of the tomato sauce once the meat had been added. 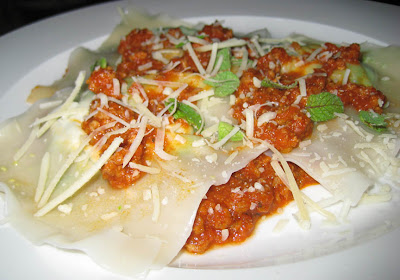 Voila, the finished dish. It had an interesting Moroccan flair from the combination of mint and spicy lamb sausage. As I used won ton wrappers, the ravioli were a bit on the delicate side, but they still worked with the sauce, which in itself was really terrific. I'd happily make it again to use as a topping for a pasta like rigatoni or farfalle.
Overall, the dish was a bit fussy and had a lot of (non-difficult) steps that required several pots and pans and the food processor, but I wanted to try something new. Mission accomplished.
Next: We're making most of Thanksgiving dinner this year, including the turkey, but not at Casa Minx. Stay tuned!
Posted by theminx

Kathy, I've nominated you for an award!

As you may know, Wendi at Bon Appetit, Hon, started a little blog award wave of blogs she likes and the wave eventually reached me. The idea is that if you are nominated, and accept, you note a few blogs that you like. Wendi has a graphic for the award, too - it's the leg lamp from A Christmas Story. The idea is just to point out a few blogs that you really like and to say why.

I nominated you because your Top Chef recaps are funny, and much more entertaining than the show itself. Congrats!