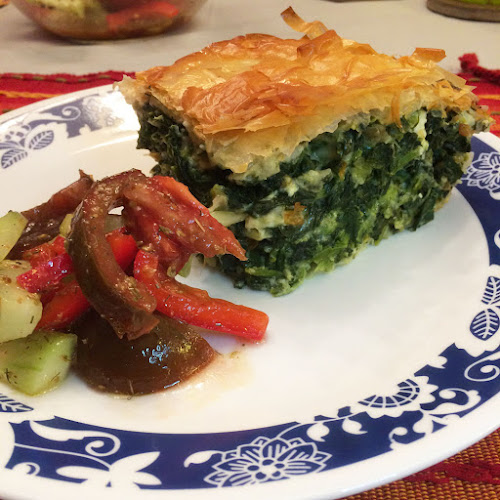 Every weekend I try to make one vegetarian dish. It's not that we eat a ton of meat, but it's always a good thing to eat more vegetables. This particular weekend was going to be Greek Week. I planned to do something with octopus (perhaps not a traditional Greek preparation) but the grocery store we went to that week didn't have large tentacles, only whole baby octopi. They did, however, have proper ingredients for spinach pie--filo, spinach, feta--which was my choice for the second night's dinner.

I'm pretty sure I've made spinach pie at least once in the past. I've definitely worked with filo before, and have definitely made baklava. But it had been a long, long time ago. I'm thinking 25 years. (I find it hard to believe I'm old enough to have been cooking for over 25 years, but alas, I am.) I'm not Greek, so I don't have a go-to recipe, which led me to poking around the Internet for one. Not that I had to poke very long. A Google search for "spinach pie" brought up one by Ina Garten that sounded easy enough, and I knew an Ina recipe would be reliably tasty. It called for 30 ounces of frozen spinach and only 6 sheets of pastry, 6 extra-large eggs, and 4 ounces of melted butter. Kinda crazy, I thought. Not enough pastry, too much spinach and butter, and the eggs are a weird size that I don't buy. So, I did what I always do and modified the recipe to work for me.

She also called for it to be baked in an 8-inch oven-proof saute pan. I can't imagine that amount of spinach fitting well in a small pan, so I used a square 8" baking pan instead. The sides are much higher than on a skillet, to contain all the goodies. (Yes, I dare to question the Barefoot Contessa!) 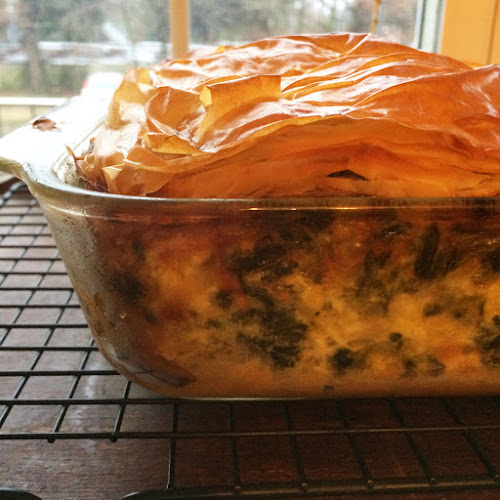 I used a bit less spinach, smaller eggs, and more filo. I also changed the proportion of cheese a bit, as I had more Parm than Feta in the house. (This is what happens when I find a recipe after I've been to the store and not vice versa.) I also used far less butter, only about 3 tablespoons. There's no way her six sheets of filo needed a whole damn stick! I also omitted the pine nuts and the bread crumbs.

The result was simply gorgeous, and it tasted fab. You really have to like spinach to enjoy this pie, and I do. It was really really good, and something I might try to make more often. Though filo is a little fussy, as it dries out really fast, the overall recipe is pretty simple. Definitely worth the effort.

Preheat the oven to 375 degrees.

Cook the onions in the olive oil in a large saute pan over medium heat until lightly browned, about 15 minutes. Add the salt and pepper and set aside to cool.

Place the spinach in a tea towel and squeeze out as much liquid as possible. Put the spinach in a bowl and add the eggs, nutmeg, red pepper flakes, garlic powder, parm, and feta. Stir well to combine.

Butter a 8" square pan. Layer 6 sheets of filo dough on the bottom, folding or overlapping them so they fit, brushing each layer with melted butter. Put on another two layers of filo, allowing some of the dough to hang over the top of the pan. (This will create sides to keep the filling from bursting out.) Fill the pan with the spinach mixture, then fold over the filo ends. Top with another 4 layers of filo brushed with butter. Brush the top with melted butter.

Bake for about an hour. Allow to cool for at least 30 minutes before cutting and serving. 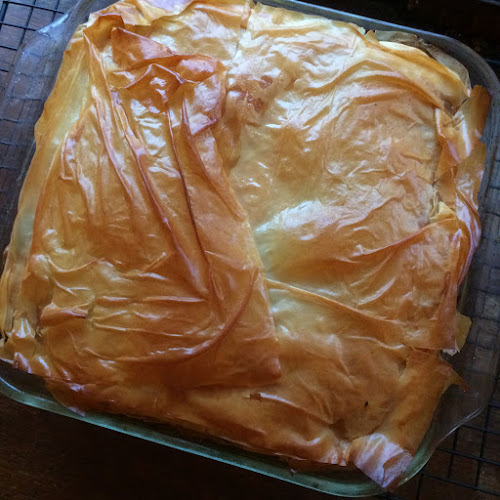