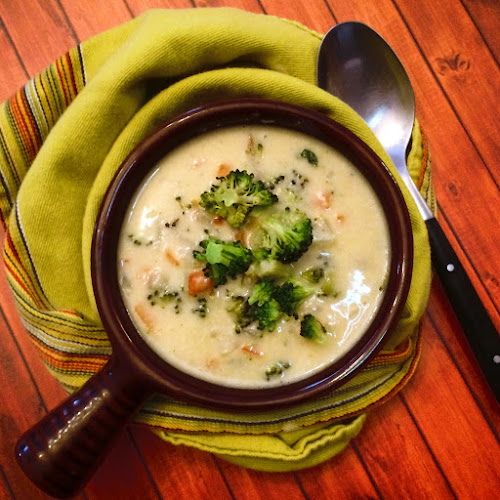 Most broccoli cheese soups I've had are as thick as paste and is about as tasty. The broccoli is often mushy and flatulent, well past the point of overcooked. And forget canned versions; I find them abominable.

Homemade soup, on the other hand, can be quite delicious. And no, you don't need a crock pot (not for anything in my book). Broccoli cheese soup is actually quite quick, especially if you don't roast the broccoli first. But why not? Roasting adds another layer of flavor, and it can be done while you're prepping the other veg.

There's also no need for a gloppy texture. Just don't use so much flour!

This soup is somewhat lean in that I didn't use whole milk or half and half, as some recipes call for. Much of the broth's flavor comes from bottled dry hard cider (but a light beer will also work) and chicken stock. It's roux-thickened, so there's not really any need for tons of dairy. And it doesn't need more than a cup and a half of cheese--it's not fondue, after all.

I think this soup is perfect on a cold winter day, especially like the snowy one we just had. In fact, this was dinner that very day, accompanied by hot buttered toast. It would also work well using a small head of cauliflower in place of the broccoli. Even a pound of button mushrooms, sliced and sauteed in butter, would make a good substitute for the broccoli-averse. 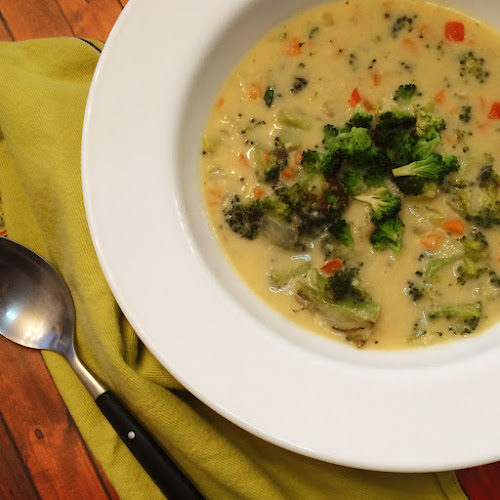 Trim broccoli stems. Cut into small florets. Peel the stems and cut into chunks. Arrange in one layer on a foil-lined baking sheet, drizzle with olive oil and a big pinch of salt. Roast for 20 minutes, or until florets start to char a bit on the edges. Remove from the oven and allow to cool.

In a soup pot or dutch oven, melt the butter and stir in the flour until a paste forms. Add the carrot, pepper, and onion and cook, stirring frequently, for 3-4 minutes, until veg start to soften and everything smells good. Pour in the cider, stock, and milk and bring to a simmer. Season with the Worcestershire, nutmeg, pepper, a few shakes of hot sauce. Add the broccoli and simmer over medium-low heat for about 20 minutes, until the broccoli is tender. Stir in the cheese until melted. Season with salt to taste.