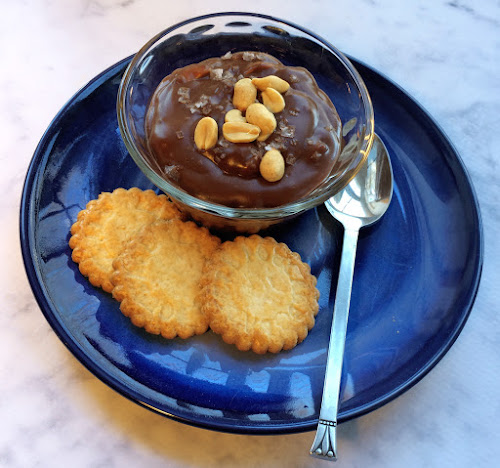 When I get food products to sample and review, I don't really like to talk about the product straight up because I feel like it reads too much like a commercial. And unless the Super Bowl is on, most people don't like commercials. What I prefer to do is concoct some sort of recipe with the product in question and then post that. I feel like I have accomplished something by developing a new recipe, and I can talk about the product, too. But sometimes the products do speak for themselves, especially when they're cookies. Good cookies, that is.

I had this grandiose idea of inventing some sort of new banana pudding, only not using bananas, and with a different flavor of pudding. The La Mere Poulard cookies I was sampling would be the base of the not-banana-pudding, the vanilla wafer replacement. Only they were so tasty, I didn't want to cover them up with other flavors. All three types of cookie I received--sables, shortbread, and caramel biscuits--are buttery and crispy and smell simply wonderful, particularly the caramel ones. Two or three with a cup of tea is a perfect midday pick-me-up. 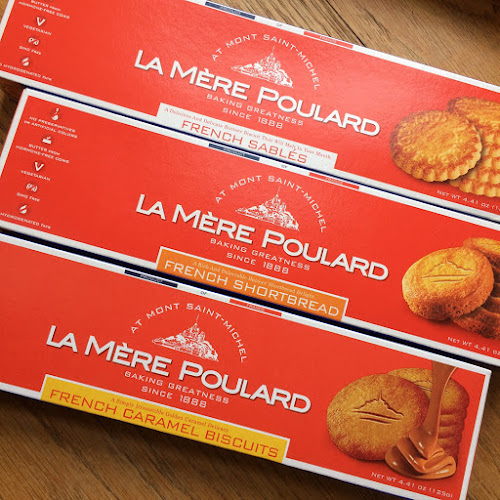 The cookies come from France--Mont Saint-Michel, to be precise. The story is that Annette Poulard, the local baker's wife, opened an inn on Mont Saint-Michel in 1888. Tourists flocked there for Poulard's cooking and especially her butter biscuits, which she baked for more than 50 years. Today, they're available in the US at stores like Whole Foods (and on the Internet).

Although I no longer wanted to use the cookies in a recipe, I still wanted to make something to go with them. Since I had pudding stuck in my head, I went with it. This recipe is based on the classic Hershey's chocolate pudding recipe, and is so fast and easy I don't know why anyone would ever buy instant pudding. I added peanut butter and rum, just to be different. The result was rich and chocolaty, with a distinct peanut flavor. Eating it with a couple of crispy cookies (the ones in the top photo are the sables) adds a bit of extra texture. You could, if you'd like, crumble some cookies on top of the pudding and pretend you've invented a new dish. Or just skip the pudding and have some of the cookies with a cup of tea.

Combine sugar, cocoa, cornstarch, and kosher salt in a saucepan. Slowly whisk in the milk, first making a paste of the milk + dry ingredients, then adding the rest of the milk. Cook over medium high heat until it comes to a boil, stirring regularly. Boil for 1 minute, until thickened.

Store in the fridge in a covered container until ready to eat. If you're not a fan of pudding skin, then press a piece of plastic wrap directly onto the pudding.

Spoon into bowls and garnish with peanuts and a sprinkle of sea salt. Serve with cookies.