Baltimore has never been known for its pizza. Starting in the 70s, many restaurants serving pizza used "fresh dough" that was trucked in from a factory, so crusts were uniformly flavorless and flabby across the board. Then the big chains like Pizza Hut, Domino's, and Papa John's came in. They put out complete crap, but since they can seem like the only choices, especially for delivered pizza, people eat them anyway. There are exceptions, of course. Matthew's, in Highlandtown, claims to be Baltimore's first pizzeria (since 1943), and they are a favorite of many. There's also Pizza John's in Essex and Squire's in Dundalk (my fave), both serving tasty pies for generations. But even with a couple of decent pizzas in town, Baltimore was never going to be New York, a city where even a cheap dollar slice can be manna.

Suddenly, in the 21st Century, Baltimore has good pizza. Even some great pizza. We even have New York pizza now. Ok, technically Paulie Gee's serves Neapolitan-style pizza, but founder Paul Giannone opened his first shop in Greenpoint, Brooklyn. The Baltimore outpost, owned by Maryland native Kelly Beckham (aka Pizzablogger), is the second franchise location outside of NY and a welcome addition to the foodie paradise that is the neighborhood of Hampden.

Paulie Gee's is all about the pizza. It's pretty much all they serve, apart from the three salads currently on the menu. We tried 'em all. Each salad features its own type of greens (spinach, baby arugula, or spring mix) with a handful of toppings and a vinaigrette. Nothing groundbreaking, but all tasty, and fine choices if diners need something green to fool themselves that they are eating healthily in a pizza joint.

The pizza is the real show here. We heard that the pizza crusts weren't quite perfect when the place first opened, at least not in the opinion of some of our foodie friends. Chalk that up to getting used to the ovens and all the vagaries involved in making pizza crust, from the yeast to the water to the fermenting times. Now, however, I think they have it down.

Currently the menu boasts some 34 pizzas, a baker's dozen of which are vegan. We took a vegan friend with us one afternoon to sample a couple pies. He chose the Lou Ferrigno with cashew ricotta, pecan pesto, and vegan sausage (all house-made) along with basil, grape tomatoes, and a dash of nutritional yeast. It was pretty, and the ricotta was admirably cheese-like. He seemed to think the sausage was realistically meaty, but I'm not fond of meat analogs in general. 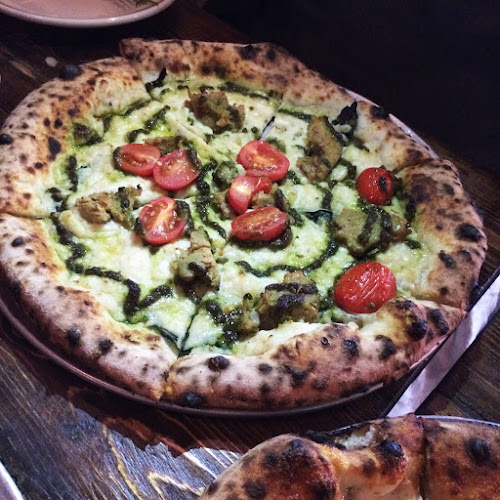 We also had the In Ricotta da Vegan (I'm not sure if the names amuse me or make me sad) with vegan tomato sauce and more of that sausage stuff; dollops of cashew ricotta, baby arugula, and evoo are added after the pie emerges from the oven. Again, the vegan ricotta was pretty nice. Of course the real star of both pies was the crust, thin, lightly chewy, with a nice crackle and a ton of blistering.

Over two visits, Mr Minx and I tried four other pies, two with tomato sauce and two without. We ordered the Betty White, a white pie with mozz, parm, pecorino, garlic oil, and soppressata, but got the Barry White, instead which is meatless. Because our server didn't write our order down. (Why? Why? Something usually comes out wrong or not at all when people rely on their memories.)


...and Hot Child in the City (somewhat similar to Mo Cheeks, but the red onion isn't pickled, the guanciale is replaced with Italian sausage and rosemary, and there's a liberal dose of HOT chile oil).

Also the Stinger Bell. Yes, they couldn't not have a fucking reference to The Wire, because, you know, that's all Baltimore is known for. At least they didn't top this white pizza with shell casings and smack. Instead, there's a clever combo of smoked mozz, basil, lemon slices, lemon bitters, and Mike's Hot Honey. Yes, it sounds totally wacky, but works well together. The lemon doesn't make the pie sour, and the honey doesn't make it sweet. Instead there's great balance with subtle smoke in the background.

Beckham, and Co. transformed the former Republican Club by exposing the brick and decorating the place with two domed pizza ovens and a ginormous stack of fire wood. The wooden chairs aren't particularly comfortable, but one doesn't linger over pizza. With those blazing ovens, they take a short time to make, and the thin crust means they get cold pretty fast. Best to eat and get out so the next pizza hungry patrons (and we are legion) can take their turn. There's also a full bar in the back with a growing list of wine, beer, booze, and cocktails (which are also available in the front).

We like Paulie Gee's a lot. The pizzas are very good, and it's a hell of a lot closer to us Towson residents than our other favorite pizza joint, Hersh's. Expect lots of pizza photos on our Instagram accounts (@minxeats and @neal.patterson).