The cheftestants find a note from Padma in their condo. She directs them to "harvest" the ingredients for the Quickfire Challenge and bring them to the Healthy Choice Kitchen where she and Emeril will be waiting. So they pile into Toyotas - first oohing and ahhing over the ugly things - and head to Taylor's Shellfish Farms.

Micah was the son of a preacher man, and he tells us he grew up Kosher - no shellfish. And now he's pulling them directly off the shoals and popping them into his mouth, as are all of the other chefs. Doesn't get any fresher than that! Josie, who at the end of last week's show was seen getting on the nerves of Stefan (and everyone else), gets caught in some quicksand. Most of the chefs are happy to leave her to sink and disappear, but kind-hearted Micah (who's not really all that kind-hearted - he probably sees it as some sort of merit badge situation) rushes to her aid, along with Stefan, who despite being a douche most of the time, can't really bear to see anything with a vagina go unassisted. 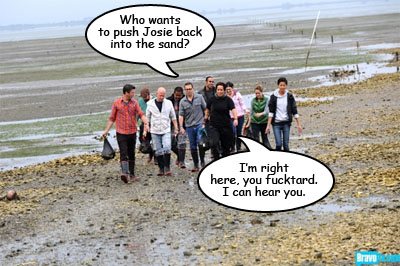 Eventually, the chefs have gathered pounds and pounds of bivalves and head back to the kitchen with them. Emeril is indeed waiting, and he instructs the cheftestants to make either a cold or hot oyster dish for him and Padma to slurp up after 25 minutes time.

Micah - who gets a lot of screen time this week - tells us that he grew up watching Emeril and cooking for him is a bit like what it must have been for Moses meeting God. Aww. Except Micah probably considers Emeril to be Moses.... 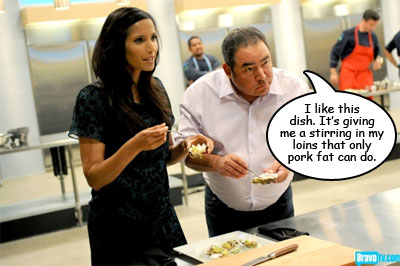 Speaking of ick, Emeril's not particularly fond of Bart's, Josie's, or TMHCiD's dishes, but he enjoys Lizzie's, Brooke's, and especially Micah's fried oysters. Micah gets the win and a $5,000 bonus, and admirably does not make any references to parting the Red Sea or receiving the Ten Commandments.

Pads wastes no time introducing the Elimination Challenge. She instructs the cheftestants to pair up because they'll be cooking for one of the most exciting sports teams in Seattle. No, not Russell Wilson and the currently-hot Seahawks, nor baseball's Mariners, but a group of lesbians who call themselves the Rat City roller girls. Yes, folks, roller derby has survived the 70s disco era and for no good reason still exists today. It's apparently a great way for tough women to beat on each other while wearing roller skates and hot pants. Brooke says roller derby is like an ultra-violent Ice Capades. But without the sequins, feathers, and Johnny Weir.

Five of the girls on the team have food-related names that are supposed to inspire the pairs of chefs to create dishes for the team's final match after party. These tough chicks, with names like Teriyaki Terror and Jalapeno Business (which I don't quite get - it doesn't sound anything like "none of your," but whatever; the sport is not logical) tell the cheftestants that they want food that isn't fussy, but isn't concession food either.

Before getting to work, the cheftestants are forced to attend a match. Battle? Fight? Hoe down? Whatever it's called when the girls put on their skates and beat on each other. Josie, a fellow lesbian and "athlete all her life," is really into it and she gets louder than usual while cheering on the madness. Her competitors all find her obnoxious and move away down the aisle to avoid her. As they sit quietly and wish for something more fun to happen - Moses meets God, or maybe Josie cheers so hard she flings herself over the balcony onto the ice - she hurls insults at them, calling them "boring," and saying that being there with them was like being there with her parents. Ouch. (Not really. I wouldn't be insulted at all. I'm sure her parents are lovely people. Unless they're just like her.)

Later, at the condo (which has to be sponsored by some product, I just haven't figured it out yet - Pledge maybe? Windex? La-Z-Boy?) the group grouses about Josie. She goes off on them as a whole before singling out Micah, basically calling him a closeted gay man. Guess she forgot that he didn't let her sink in the sand earlier in the day. Maybe he should have.

For this challenge, she's paired with Bart, who says he's a team player and isn't going to let her bother him because Belgians are civilized. Personally, I'm not feeling particularly civilized when Josie starts talking about allowing her Mexican/Filipino/Italian heritage to inform her ability to make teriyaki sauce. That ain't teriyaki sauce, babe. 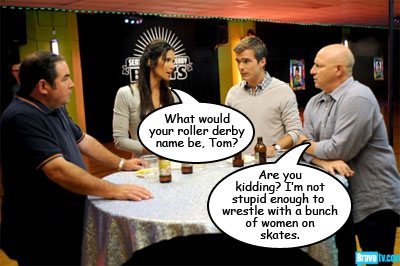 The other four teams comprise TMHCiD and Brooke, Stefan and Kristin (of course), Lizzie and Micah, and Sheldon and Mustache. They're all getting along just fine when the party starts and the judges arrive to eat. Emeril, Padma, Hugh, and Tom start with TMHCiD and Brooke's table. They're cooking for a skater named Kutta Rump, and they've made a Thai-inspired beef dish with lobster rice and a tart slaw. Their dish is bold and spicy and there are no complaints from the judges. They move on to Josie and Bart's Teriyaki Terror, which they decide is instead, "Teriyaki Terrible." The steak skewers were cooked awkwardly, their forbidden rice was overcooked, and the beet puree on top was underseasoned. Miss Terror herself, who joined them for the tasting, called the dish "unique." Hugh translates this to mean "unique crappy" rather than "unique good." 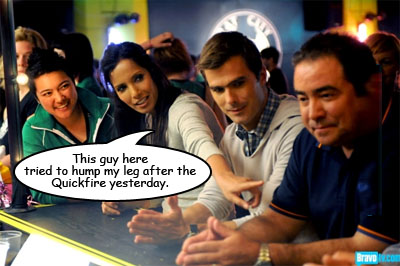 For Jalapeno Business, Lizzie and Micah made fancy jalapeno poppers filled with crab. Ms Business likens it to "elevated party food," and the general consensus among the judges is that the dish is quite tasty. Stefan and Kristen made something they called "inside out chicken" with corn puree, chicken liver, and eggs. It's a bit much, concept-wise, but good enough to keep them safe for the episode. Finally, Sheldon and Mustache produced a tempura-coated yuzu custard for a chick who calls herself Tempura Tantrum. The custards were meant to be eaten with several dipping sauces to cause a "tantrum in the mouth." Tom threw a tantrum all right, since the custards were soggy city. Nice idea, bad execution.

After at least the seventieth Toyota Camry commercial of the episode, we see the cheftestants in the stew room. Padma comes in to retrieve TMHCiD, Brooke, Micah, and Lizzie, the top toques this week. The judges waste no time in giving the win to the team of TMHCiD and Brooke. It's TMHCiD's first win despite three trips to the top, and rather than be thankful that he finally lucked out, he complains that he'd prefer to win solo. Guess he never considered that he might not have been good enough to win solo?

Anyhoo...Sheldon and Mustache and Bart and Josie are brought out as the bottom teams. The former are complimented on their concept, so it's fairly obvious that they are safe. But Mustache, who has a bug up his butt about Lizzie and Micah's jalapeno popper, decides he needs to question the judges' choice for putting that particular dish on top. He realizes this makes him seem like CJ during the artisan pickle fiasco that got him and Tyler eliminated, but asks anyway. Tom explains to Mustache kindly, like a grandfather explaining something to a slow child, that the jalapeno popper in question was well-prepared and delicious, therefore his question was invalid. He was entirely too nice about it. I would rather have Hugh just tell Mustache that his custard on a stick sucked and be done with it. 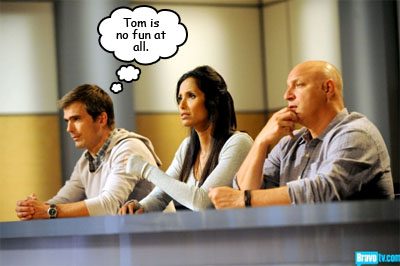 While I start getting excited that obnoxious Josie might be leaving this week, Bart confesses that he not only made the meat portion of their dish, but also the overcooked rice and underseasoned beet puree. Josie only made the sauce, which apparently wasn't bad enough to even mention. So Bart goes home for lack of seasoning. Nice guys always finish last. Civilized ones at least.

Next week - the cheftestants visit old challenges from prior seasons.