This week, the episode starts out once again with scenes from last week's stew room. The chefs are cowed after hearing that there would be no winners because of the sheer suckitude of all of the dishes. There's no real squabbling, but Stefan seems pissed off and Brooke is crying. We imagine she's crying because she did poorly, but maybe Stefan made a pass at her - who knows?

Anyhoo...this week, the cheftestants meet at the Product Placement Kitchen to find Padma standing with an old lady. Not just any old lady, but Marilyn Hagerty, now-famous critic for the Grand Forks Herald. The podunk paper printed the 86-year-old's positive review of the town's much-anticipated Olive Garden and overnight, she became an Internet sensation. She's even got a book deal with Tony Bourdain. (Makes me think I should have been more positive in my review of the Melting Pot.) Since North Dakota is nowhere near Seattle, I have to wonder if there's any reason other than novelty that Ms Hagerty is judging the Quickfire, but I think it's safe to assume that the answer is "no."

For this Quickfire, the cheftestants must pretend it's the holiday season. Christmas in July, if you will. The challenge is to create a sweet and savory holiday dished based on each chef's family heritage. For the sweet part of the dish, they need to utilize this week's sponsor, Truvia, the artificial sweetener made from the stevia plant. And don't tell me that shit's natural. I've tasted the stevia extract they sell at the health food store, and that stuff, while it has a bit of sweetness, is harsh and licorice-like in flavor. It needs a whole lot of processing to get that nasty taste out. Not only do they need to use the sweetener, the cheftestants also have to battle to use one knife, which Lizzie pulls out of the knife block. She tries to hog it first, but Mustache grabs it and slices and dices everything he can get his hands on before he has to surrender it to the next person in line. Meanwhile, the others are using the meat slicer, the front edge of a spatula, anything that seems like it could cut or chop.

After thirty minutes, Padma and Marilyn do the rounds. Brooke becomes worried when Padma calls her apple pie with cheese "homey," and smug Micah sneers when Marilyn says she's never seen a tamale before. 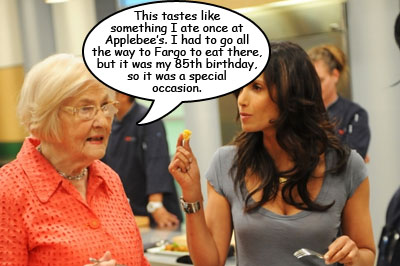 Stefan has made potato latkes because his ex-wife--whom he married and divorced twice--is Jewish. Marilyn quips that if he marries the same woman twice, he's not particularly creative. In the end, she thinks that Bart's chicken and waffles has too many things going on, while Micah's tamale - which she calls a taco - is too dry. She likes Mustache's johnnycake and Stefan's potato latkes, but it's Brooke's apple pie with cheese that steals her heart and earns the chef immunity in the next challenge.

Marilyn is shown the door and two actors enter the stage. Anna Faris, who's been in absolutely nothing I have ever seen, and her husband Chris Pratt (ditto) are Washington natives who are in town for a "holiday homecoming" party. In June. Anna is preggo and eating everything in sight, and both of them are foodies, so they want the party food to be primo. Lord knows why they went to Top Chef if they want good food, but they're probably also media whores who just wanted to be on television. Stefan thinks he has something in common with Anna because they've both been on Entourage. Like I said - media whores. 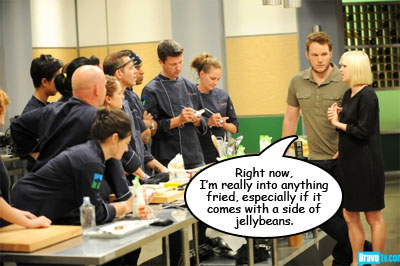 The cheftestants have five minutes to find out exactly what the Pratts like to eat before they head off for shopping and prepping. But first - they have to do a special shoot where they ooh and ahh over another product placement. The winner of this challenge will get a new Toyota Prius, which is conveniently parked around the corner. Stefan says he could use the car to make deliveries for his restaurants and takes the opportunity to plug his Web site, stefansrestaurants.com. (I don't know why I'm plugging him, since the fuck unfriended me on Facebook last year. I suppose I still find him entertaining.)

After shopping, we see the chefs running to the kitchen. As he gets to the double doors, TMHCiD slips and falls, which is rather gratifying to see. At least I enjoyed it.

After several hours of prep, during which time Mustache is making pork to "redeem" himself from last week's tenderloin debacle, the chefs wrap up their goods and head over to the party venue, Chihuly Garden & Glass. The place is gorgeous, btw, and the Web site is worth a visit.

The chefs set up and the guests arrive, most of whom seem to be shrill women. "Hiiiiiii! How are YOUuuuuu?!!??!" is heard over and over again as the guests greet each other. Ack. I don't know how anyone can concentrate with that noise around them. It's like being in the monkey cage at the zoo, only with better perfume. Some of the chefs aren't doing so well. Micah is having issues with his celery root puree, and both Danyele and Eliza are experiencing toughness issues with their meat. There's probably a dirty joke in there, but I'm too tired to come up with one. 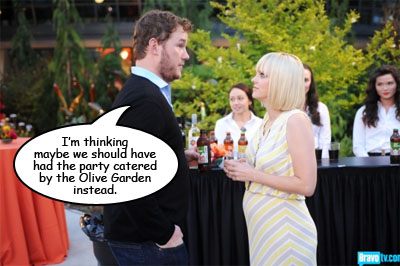 Soon the judges arrive, including Rick Moonen (who once employed TMHCiD) and Gail Simmons, who is looking extremely boobaceous tonight in a tight pink dress. Padma is wearing a weird dark quilted shirt and no pants. The judges make the rounds with guests of honor Anna and Chris, starting at Belgian Bart's station. 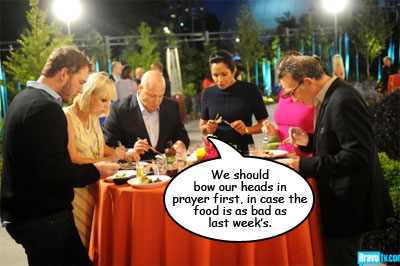 They take several dishes back to a table for tasting and practically have orgasms over Brooke's lamb-stuffed squid. It's not until the second round of dishes that we start to hear complaints about the food, so it's clear that the cheftestants really stepped up after last week's extreme fail. One chef who doesn't fare so well is Eliza, whose elk was unevenly cooked and bland. Gail tries to see the brighter side of things by mentioning that her huckleberry sauce brought a much needed hit of acid to the dish. Chris Pratt, whose sense of humor was probably finely crafted in middle school, takes the opportunity to ask if the judges had indeed all taken a hit of acid. Nobody laughs. 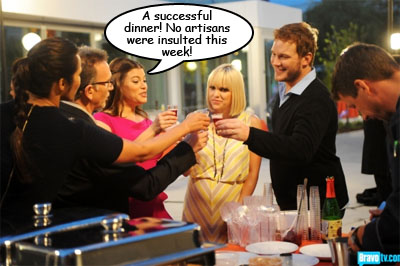 Back in the stew room, much later, Padma calls out TMHCiD, Kristen, Brooke, and Sheldon. They made the best dishes of the night. TMHCiD's chowder - which was based on a recipe learned from Rick Moonen - was "money," and Sheldon's pork belly with congee warmed the cockles of their hearts. But Brooke's stuffed squid dish was the best and most daring, and showed she was willing to work hard, despite her immunity. After her win, they head back to the stew room, where Brooke sends out her fellow cheftestants to face the music: Eliza, Micah, Mustache, and Danyele.

Danyele has been given a loser edit through much of the episode. It's clear that she's nervous and not performing to her potential. Her wild boar chops were bland and boring. Micah's puree was fibrous, and Mustache most definitely did not redeem himself through pork. But it was Eliza's elk that was most disliked, and resulted in her being sent home. When she gets the verdict, she tells the judges that she won't shake hands with them because she's got a cold. But she cooked for them. And then back in the stew room, she gives everyone else a hearty hug and kiss.

Next week: everyone has the flu.