For nearly an hour last night, the Food Network kept us in suspense as to the winner of this competition, and so I'll do the same thing here in this post. I guarantee you will be in a state of suspense for the entire 3.5 seconds you stay on this page, wondering "where the hell is the funny?"

Essentially, this episode was the usual "reunion" special that follows some reality shows like Project Runway and Top Chef. And that's ok - for the most part, I enjoy watching blooper reels and the like. Unfortunately, the Food Network takes itself too damn seriously. There wasn't all that much fun to be had in this show. 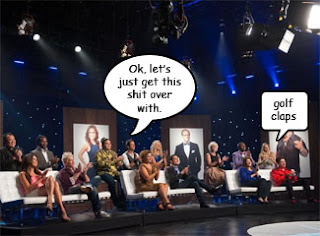 All fifteen Wannabes and the three mentors gathered together to rehash old times. The Star Challenge this week: sit through an endless series of pointless montages. Since I can't embed the video for some reason (or, I can embed it but it won't play) go watch this first, for a laugh.

Back? Wasn't that fun? Sorry if non-South Park fans were offended in any way (not really). The first montage we're treated to tells the story of the season in about 90 seconds. Ok - we're done. Can we go now? Who's the winner?? But no...another montage reveals the intense rivalry between teams. Apparently Team Bobby had something against preternaturally perky Emily Ellyn, Queen of re-purposed meatloaf. In one clip, Nikki informs us that "Begins with an E ends with a 'Y are you here?'" is annoying. In another, Justin says Team Bobby was comprised of bullies, but we know he meant Nikki. Who was also annoying.

A bit later, Susie tells the restless crowd that 4.5 million votes came in and she knows everyone is waiting for the verdict but... they'll have to wait longer. Bitch. Not only will there be a long commercial break first, but rather than come out and announce the winner at that time, they're going to name the one finalist who didn't quite cut the mustard with the voters. And that was...

But first, a word from our sponsor.

And now they get rid of one finalist: Martie. Mr Minx calls bullshit. He doesn't believe for one second that she received the least amount of votes, not by a longshot, but that the Network just wanted to get the field down to one finalist from each mentor, as was the original plan. He thinks that they'll give her a show on the Cooking Channel. I think he's probably right.

We then find out that an anonymous survey was sent to the Wannbes, asking questions like, "who was the most competitive?" (Nikki) 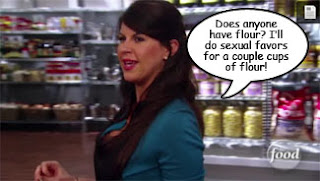 "who was the cockiest?" (Malcolm) 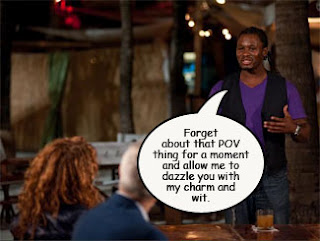 and "who was the oddest couple?" (Martie and Justin). How very high school.

There's a montage about the mentors, "like we've never seen them before." We did see Alton pick on Giada here and there during the season, but apparently he and Bobby did it incessantly off-camera as well. At one point, Alton quips that there should be a Giada See-and-Say toy that says things like "ree GOT a." Heh.

Another montage reveals the secrets of the Shrine of the Glowing Vagina. Well, no secrets, really, but that Tushface and Susie felt some real power when they were in there. The estrogen levels in the "Pitch Room" were out of control. They also had some disagreements about who to eliminate now and again. 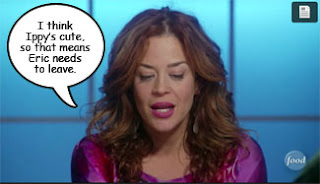 Another segment allowed the Wannabes to ask Tushface and Susie questions. Judson takes the opportunity to ask if they would take back the "BS artist" comment and Susie says she wishes she had said it to him earlier. Nikki whined that they were hard on  her, and Tushface wishes he had been harder on everyone.

Looking back at past seasons, Tushface and Susie had been much tougher on the contestants, and old eliminations were somewhat uncomfortable to watch. This year they were all nicey-nice, which of course is a big bore.

Then we got montages of the three finalists. First Justin, then Michele, then Yvan.

And about 100 commercials later...

Brooke Johnson, Queen Bee of the Food Network, trots out to announce the winner. She doesn't seem particularly thrilled, or maybe she's been hitting the Scotch and Valium bar set up to help the non-winners drown their sorrows after the show. She announces that the winner's show will debut in the Fall, and will be produced by his or her mentor.

A large portrait on the wall of shame (along with Rachael Ray and Guy Fieri), originally bearing a humongous question mark, is now behind a curtain. The curtain is removed to reveal the winner: 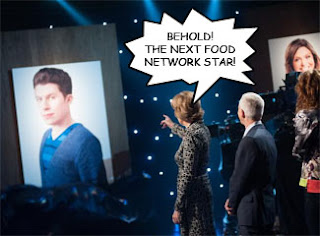 Justin Warner. No kidding. I'm shocked that the Food Network's audience has such good taste. But then I remember back to season three when Amy Finley won. She was a mild-mannered gal, chosen as the winner by the home audience, perhaps as backlash against the season 2 winner, Guy Fieri. I think the Network really wanted bigmouth Rory Schepisi to win it, and boy were they surprised that America wasn't into her. The following season, they discontinued the home vote so something like this couldn't happen again.

America has been into Justin since at least week 3, as he's had the most votes on the FN site since about then. It's no surprise that he won this thing, at least not to us. 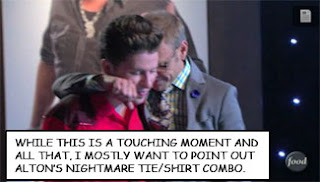 Congratulations, Justin! Please don't let them turn you into a douche.