For several weeks I'd been looking forward to eating at The Fork & Wrench. And wouldn't you know it, the day that my Dad and I both had free (he was my date for the evening) was the day the Sun review came out. Luckily, we managed to snag the last available un-reserved table for the evening.

We'd just come from Of Love & Regret, so we were only looking to try entrees at F&W. I really really really wanted the scallops, which the menu described as coming with a chilled pea panna cotta, watermelon radish chips, and Meyer lemon. I'm drooling just thinking about it. And I wanted the wild mushroom saute, too. But our waiter practically begged me to try the duck, instead, and accompany it with a glass of malbec. Since he gave me the puppy-dog eyes, I acquiesced and chose the duck over the scallops. But I did order the mushrooms (and still wanted the scallops).


Our waiter told us that he worked in the kitchen as well as the dining room and seemed excessively proud of this dish. It was very pretty. But the duck itself was underseasoned, and as evidenced by the photo, still retained quite a bit of fat. Also, the skin wasn't crisp. People who think they don't like duck really should try magret, which is definitely red meat and is remarkably "beefy." A shame mine was lacking salt (and there was none on the table). The accompaniments, however, were delicious, and I especially liked the texture of the farro risotto. The glass of malbec I was prompted to order was fine. Nothing that set my taste buds a tingling. Just fine.

And I never did get those mushrooms. Why don't servers write things down anymore? Is this memorization thing supposed to dazzle the customer? I am not impressed.

Dad's pork chop was very nice, particularly the apple and onion side. The egg was a bit odd, as it was still quite "snotty" in texture and the dish didn't need another dollop of protein (especially since I ate it). One could argue that it was really an accompaniment for the asparagus, but there were only three slender spears, and they were already cooked in butter.... Anyhoo, a tasty dish.

We decided to split dessert, which was silly, since the portion size of our scoop of brown butter ice cream was so tiny. I loved the flavor, which was subtle, and really liked the tiny Florentine cookie, but thought it could have used a couple toasted almonds. 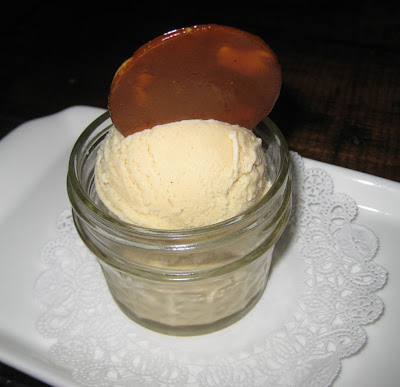 I think I've heard more about Fork & Wrench's decor than the food, so I made sure to pop my head into all of the dining rooms on the way out. I liked the space on the first floor behind the bar the best, mostly because of the light coming in from the back patio. The rest of it was a hipster's vision of shabby chic, with a soupcon of steampunk thrown in. I'm not big on faux-shabby or faux-rustic, so I suppose I was a bit disappointed.

Soo.... Not exactly the best first impression, although I could tell from the risotto and from Dad's dish that the kitchen (run by former Vino Rosina sous, Sajin Renae) has some mad skillz. Next time, I'll come back with a reservation and order exactly what I want to eat.