Has anyone noticed that Baltimore is becoming a pizza town? Mighty fine pies are now available at Bagby's, Chazz, Joe Squared, Iggie's, Two Boots, Toss, and more. The newest kid on the block is Earth, Wood, & Fire, which opened in May. They have a lot more than pizza, so we grabbed our friend Melinda for a whirlwind tour of their menu.

The space is large and airy, with a very minimalist, vaguely industrial decor. I say "vaguely" because one has to look up at the ceiling to see the exposed ductwork; the Seussian arrangement of twisted pipes seems to be the only ornamentation in the main dining room. EW&F must have been eagerly awaited, because early on a Saturday evening, the place was packed, mostly with families. Toddlers abounded, and the place was loud. So...you are forewarned.

Despite the general din, we didn't have trouble communicating across the table and soon selected a representative dish or three from each category on the menu. 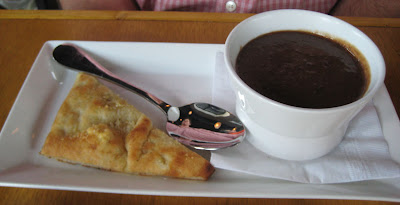 At the moment, two soups are on offer. We tried the spicy sausage and black bean soup. The sausage must have been finely crumbled, because I didn't notice it. The soup was otherwise spicy as advertised and pretty good. We thought the flatbread accompaniment was a nice touch. 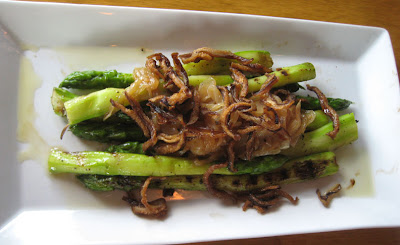 From the ubiquitous "small plates" section of the menu, we sampled the "Grilled Jumbo Asparagus with Shiitake Bacon and Caramelized Shallot." The asparagus was far from jumbo, but we loved the grilled flavor of the perfectly-cooked spears. The jumble of mushrooms and shallots punched up the flavor with elements of sweet and salty. 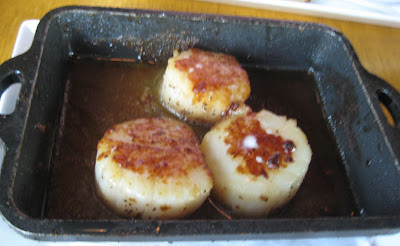 Another choice from the small plates menu was the "Josper-roasted" sea scallops. The "Josper" is a charcoal broiler oven, which is not to be confused with the coal-fired oven that the restaurant uses for their pizza. I was a little disappointed that we only got three scallops because I've been craving scallops for months now and have yet to be completely satisfied. Not to mention that I had to share. These were simply dressed with olive oil and lemon juice and nicely done. I would have liked more. 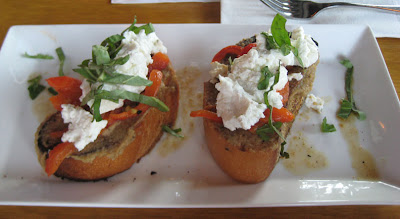 We were intrigued by the description of this bruschetta-like small plate, billed as "Focaccia with Goat Cheese, Fire-Roasted Peppers, and Eggplant Nectar." What the heck is eggplant nectar? Sounds like something that hummingbirds might eat. In reality, it was a baba ganoush-like spread. The bread clearly wasn't foccacia (it might have been "focaccia"), more like a thick baguette, but the combination of goat cheese, peppers, and that eggplant stuff was flavorful. However, we think you should save your carb allowance for the pizza. 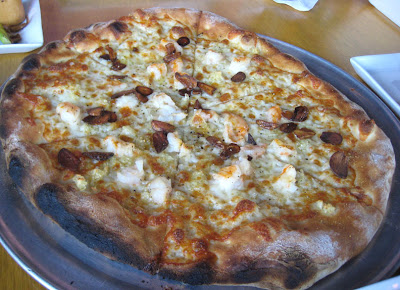 Pizzas come in 10" and 14" sizes with lots of DIY toppings and a few custom combinations. The one we tried, the Bianco, was a white pie (ricotta, romano, mozz, no sauce) topped with Gulf shrimp and garlic chips. It was garlic-licious in a big way. We loved the crust, which was quite thin. Rather than venturing into cracker-ville like so many thin crusts are wont to do, EW&F's coal-fired oven produced one with a nice chew and crisp bits of char here and there. Despite having so much other food on the table (we're not done yet!) we scarfed down this 14" baby. 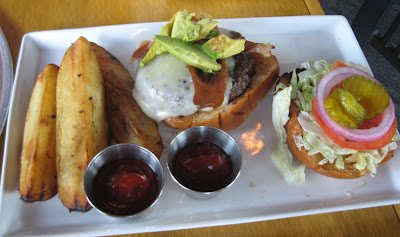 That's right - we also tried one of the burgers. The "Frog & the Redneck" sounded tempting with its combo of brie, fried green tomatoes, and Southern ham, but we instead opted for the Monterey, which included avocado, tomato, Monterey jack, and crispy Serrano ham. It turned out to be a rather meek-flavored combination that was largely overpowered by the pickle slices. The burger itself, however, cooked in that Josper oven, was juicy, moist, meaty, and overall delish. The side of "Josper" fries (regular and sweet potato were also choices) were a bit too thick-cut for my taste, but Mr Minx snarfled them up without complaint.

We also tried the Lorenzo salad, a flavorful combination of arugula, Belgian endive, Gorgonzola, red seedless grapes, and toasted macadamia nuts in a lemon vinaigrette. The salads are available in two sizes and can be topped with any of the myriad pizza add-ons for an extra charge. Those add-ons are categorized as "standard" and "deluxe," but none of them are quite standard (capers? roasted fennel? arugula? not standard).

Our enormous feast was quite filling, so we passed on dessert. I'd have eaten more scallops though. Maybe I can finagle to get them on a pizza next time. And oh, there will be a next time. Six big thumbs up for EW&F.