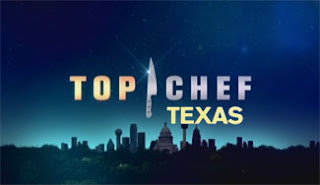 This season, Top Chef is in Texas, bitches, which means it's going to be bee-eye-gee BIG. Big hair, big cars, big beef, and guest judging by the likes of famous Texans like John Hinckley, Jr., Mark David Chapman, Richard Ramirez, Dubya, and Rick Perry. This year's permanent guest judges are big too - Emeril Lagasse! Hugh Acheson and his big unibrow! Yay! I like Hugh and was happy to see him get a second chance on Top Chef Masters. He's snarky, and, um, kinda cute. (Don't judge!)

Before the big contest gets started in earnest, there's the little rather large matter of narrowing down the competition. In past seasons, there have been 16 or 17 chefs to start with. This year--because it's Texas and everything is BIG in Texas--there are 29. Twenty-fucking-nine chefs, all of whom think they are already in the competition. But they are WRONG in a BIG way. Only sixteen of them will end up sleeping on bunk beds in the hallways of the Top Chef Mansion...after cooking their way into those coveted positions. Which of course are...top and bottom.

Get your mind out of the gutter - we're talking bunk beds here! 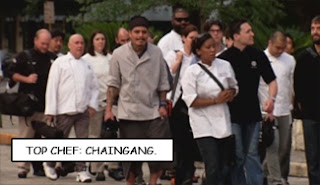 The show gets all historical on us right away by showing the wanna-be cheftestants gathering at the Alamo, where Padma is waiting for them, fashionably attired in a coonskin cap and buckskin jacket, rifle at her side. 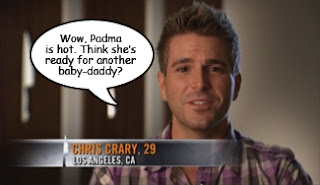 But rather than offering The Twenty-Nine a history lesson, Padma laughs evilly and tells them that they're not even remotely close to finished with the audition process. 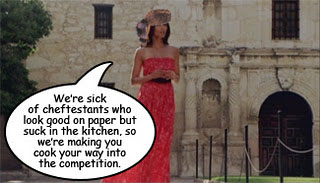 The now-confused and sweaty chefs (it's also HOT in Texas) are disappointed to find out that they will be competing against each other for one of only sixteen available spots. The chefs are then herded back to the bus for a trip to the Top Chef kitchen.

We're gonna call this competition-before-the-competition the: 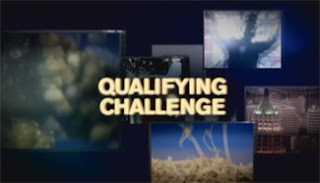 And we're gonna start with... 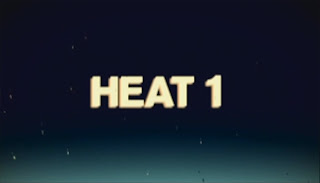 There will be three heats, each featuring the culinary skills of one-third of the wanna-be cheftestants. The first ten enter the kitchen (which seems really BIG) where they find head judge Tom Colicchio and new judge Emeril Lagasse (who also looks BIG, and perhaps a little confused). Tom invites the chefs to introduce themselves. 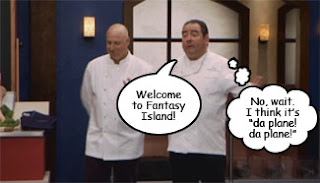 Several of the chefs are from the Chicagoland area, including two from Homaru Cantu's restaurant, Moto: Chef de Cuisine Chris Jones; and Executive Sous Chef Richie Farina, who sports a ridiculous goattee/mohawk combo. 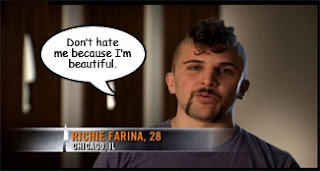 There's also Sarah Grueneberg, from Top Chef Masters cheftestant Tony Mantuano's Spiaggia, and Heather Terhune from Sable Kitchen and Bar. There are a couple of other cities represented in the first heat, including New York's Grayson Schmitz and two from Seattle: Simon Pantet, who looks like an ex-con but who speaks fluent French; and Colin Patterson. 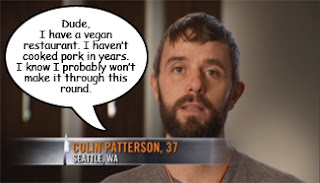 And then there's Tyler Stone. 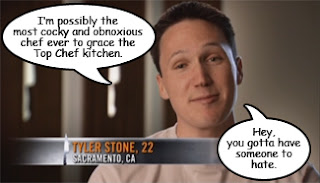 Tyler's a personal chef who has apparently cooked for celebrities far and wide. In his mind. He's 22 and thinks his diapers don't stink. His smug expression and over-tweezed eyebrows would have been perfect for Rocco's Dinner Party.

After the ten finish bragging about their various awards and nominations, Tom gives the group their challenge: choose one of ten available pig parts and create a dish from it. Some of the parts are still connected to other parts; Tyler the Prick offers to butcher the slab that contains his pork chops and also a tenderloin belonging to another chef. And butcher it he does. When he's finished with his knife and hacksaw, all that's left of the tenderloin is a little turd-sized piece. But there is justice in the world: Tom and Emeril see the carnage and bid our young fiend a hasty adieu. 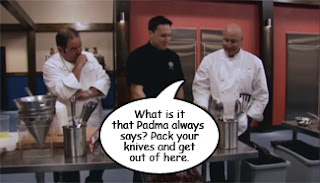 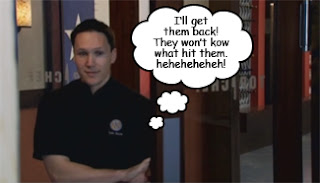 When time is called, the chefs present their dishes to Padma, Emeril, and Tom, who hold twenty-eight futures in their sweaty hands. The judges' majority vote will send a chef home, or allow him or her to earn a chef's coat and a place in the competition. However, it's possible that while a chef's dish doesn't please the judges, s/he shows a potential that may get s/him into one of the sixteen coveted spots after yet another cooking contest. As in pre-season football, this is called "being on the bubble." 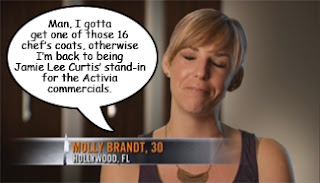 Out of this first group of chefs, five are chosen to move on (including Chicago chefs Chris, Richie, Sarah, and Heather); Grayson (who got stuck with the turdish tenderloin) and Molly are placed on the bubble and sent to the stew room for a very long wait. The vegan dude and the French-speaking guy with the prison tattoos on his neck are not in either of these groups. Seattle represent! 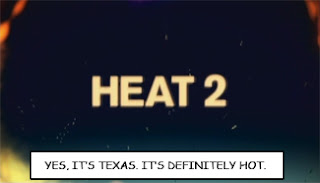 Emeril gets distracted and wanders off to yell "bam!" at the tumbleweeds; Gail Simmons is called in to take his place for the second round. 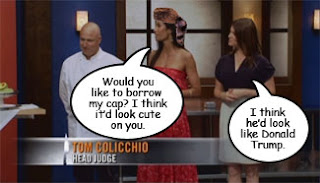 This time, the wanna-be cheftestants had to consider several of the judges' "favorite ingredients" and choose only one that each of them will use to create a dish. Rabbit is deemed the most versatile of the bunch; the chefs get to work while Gail and Tom make the rounds.

There are no Tylers in this group, so nobody is sent home before judging. But there is a Ty-Lor... 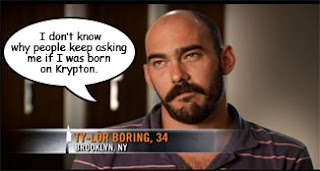 ...and a teddy-bearish actual ex-con (sans neck tattoo) by the name of Keith. And dang...a bunch of other chefs....

At this point everyone is starting to look the same and I can't believe there's a whole 'nother heat and a bubble contest to write about, but then I look at the time. I'm hoping this isn't a supersized episode. At this rate, it'll take another hour to get it all done. Sigh.

One of the many chefs left is Edward Lee, the only chef I've heard of in this competition. Regular Minxeats readers may recall that I cooked two of his recipes from the penultimate issue of Gourmet, the sauerkraut soup, and the black barbecue sauce. Both recipes were unusual and delicious, so I'm putting my support behind Chef Lee this season. 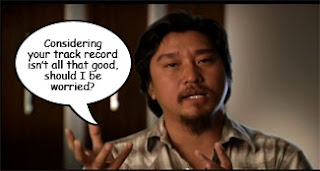 After all of the rabbity selections have been presented to the judges, another handful of chefs make it into the competition - including Dakota, Chris, Jor-El, and Keith. Two more end up on the bubble - Janine and Edward, which gives me a sad.

And gee, look at the time! Top Chef is over! And there are still umpty-ump chefs left! Guess that means we'll just have to finish this next week....

(Sorry for the extremely brief synopsis of the second heat - I ran out of steam.)