Charles Street restaurant Cazbar is now delivering tasty Turkish-style morsels to the masses via their new food truck, Cazbar On the Go. After several weeks of wondering if they'd park near the University of Maryland and actually hang around for more than five minutes (once in a while there'd be a rumor that the truck was outside, but by lunchtime, it had disappeared), I was able to catch it twice in one week. I took the opportunity to try a little bit of everything.

On my first visit to the truck, I tried two of their Turkish "tacos" - literally taco-sized flour tortillas stuffed with your choice of doner or chicken kebab, or felafel. 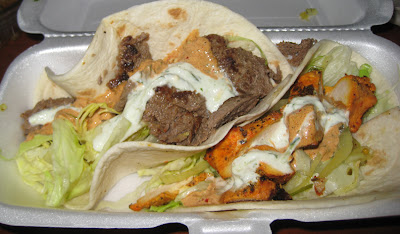 The chicken taco featured tender chunks of chicken breast with a subtle char-grilled flavor. The doner (couldn't tell if it was beef or lamb or both) was also very tender. Both tacos included a tangy yogurt sauce, chunks of lettuce, and a nice bit of heat. At $2.50 a taco, they make for a cheap - and delicious - lunch. 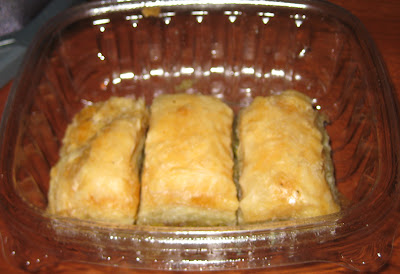 Not as reasonably-priced is the baklava, at $4 for an order of three man's-thumb-sized pieces. The portion I got was a little soft and soggy, and seemed completely devoid of nuts apart from a hint of green between the layers of pastry. I understand that Turkish baklava features nuts that are coarsely ground, but if there were pistachios in there, they were finely ground. 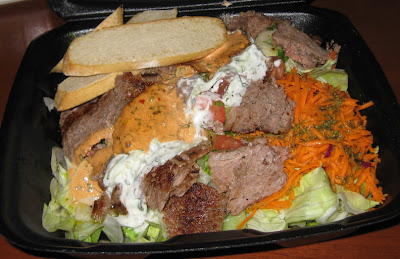 On another day, I had a honking huge salad - for $6! - topped with doner meat, shredded carrots and red cabbage, two different yogurt-based sauces, AND a tangy vinaigrette. The salad is also available with chicken or felafel.

Not realizing I'd be getting a restaurant-sized dollop (nor that the salad would be so huge), I also ordered a side of creamy baba ganoush. It was served with slices of could-be-fresher bread (as was the salad) on which to spread the eggplant and tahini concoction - I would have preferred pita. The baba ganoush itself was pretty good though.

Overall, everything was generally excellent and, for the most part, reasonably priced, which makes Cazbar On the Go yet another great addition to the roster of food trucks that are cruising downtown Baltimore.