Now that the funny-business is over, Top Chef is getting back to the original format and starting the episode off with a Quickfire Challenge. It's Texas, and there be snakes in Texas! And it's fun to make cheftestants squirm by causing them to think they will have to slaughter and skin their own snakes! But first, Padma introduces the guest judge for this challenge, Johnny Hernandez, chef and owner of the restaurant La Gloria. 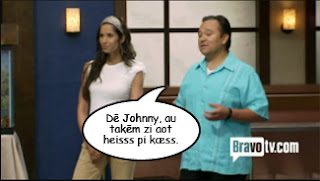 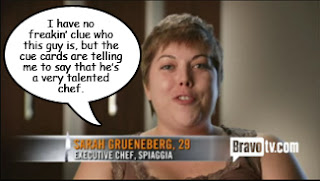 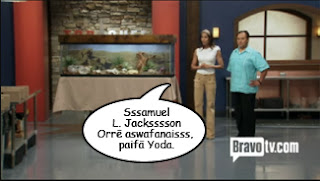 Padma tells the cheftestants that Samuel L. Jackson was originally asked to be the guest judge for this challenge but when he was told he had to speak Parseltongue, he said he was already fed up with, "mother-fuckin' cartoons and shit. I'm sick of playing second fiddle to mother-fuckin' Yoda."

So Padma is forced to do her best imitation of Mr Jackson in his stead. 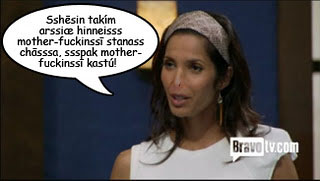 Cheftestant Dakota gets a squishy-in-the-pants kind of feeling when it comes to legless reptiles. 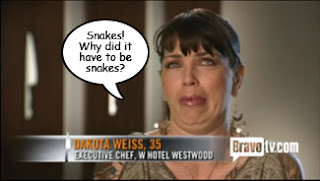 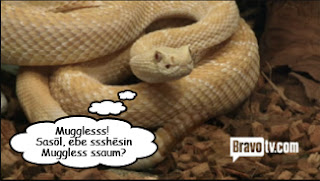 Doubtless the snakes felt the same way when told they would become dinner. (Who knew there would be so many cool snake movie references to make?!)

Big black teddy bear, Keith, is also not a fan of the snake, but he and Dakota and the other fourteen press on valiantly because five thousand smackeroos are at stake, as is immunity from elimination.

Unfortunately for the home audience, their snakes had already been killed and skinned. I would have loved to see Edward take on a live rattlesnake. He'd probably try to kill it by biting it in half or something equally dramatic. Hopefully the medic would have been standing by with vials of anti-venin this time.

After all the slicing and dicing and cooking. Padma and Johnny go down on some snake. 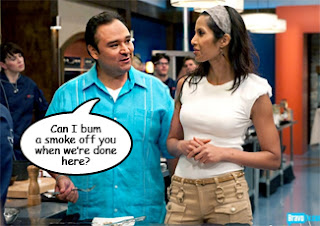 Padma looks like a match stick this season. And what's with the bizarre t-shirt? Does she have a pack of ciggies rolled up in her sleeve?

Johnny picks Paul's, The Headband's, and Nyesha's offerings as his least-favorites. Beverly, Dragon Tattoo, and Sarah deliver the tastiest morsels. After a well-placed commercial break, we find that snake-hater Dakota is the winner of the challenge. 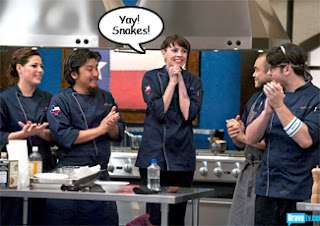 Right away the cheftestants are introduced to the dreaded knife block, which means this first Elimination Challenge of the season involves teams. Now, I could have sworn that I heard the first person to draw a knife say, "red," and the second say, "pink," which made me think - "red and pink teams? wtf?" but I was busy taking notes and might have had a brief hallucination stemming from the shot of DayQuil I had taken a few hours earlier. Then I hear Padma saying "pink and green" teams, which immediately leads me to think this is some sort of throwback 80s Izod/Docksides Preppy Handbook challenge. But then she introduces Blanca Flores, a girl of amazingly short proportions, as the hostess of this week's party. Blanca is wearing pink, but alas, she is not wearing a headband, and I'm disappointed that the preppy theme is merely a figment of my drug-addled imagination. 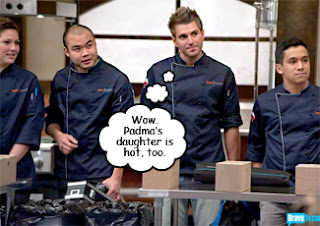 Apparently wee Blanca is/will soon be turning fifteen. In Latin America, a girl's fifteenth birthday is a big thing, called a quinceaneara, a occasion deserving of a huge, expensive, wedding-like party. For this challenge, the cheftestants are called in to create elegant Mexican food and a fabulous cake for 100 party guests.

(I guess if I were having a birthday party today, I'd have to call it my cuarentayseiseara. Doesn't exactly trip off the old tongue, does it?) 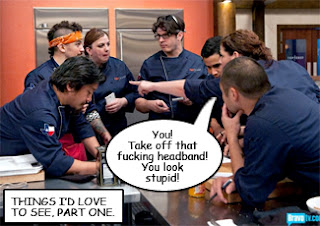 First, they have thirty minutes to pow-wow with Blanca about her likes and dislikes, then they go shopping with a $1500 per team budget. Half of the team shops at Whole Foods, while the other half goes to a Latin market. The guys on the Pink Team are tasked to buy shrimp for a passed appetizer and Keith has the grand idea to buy cooked shellfish because it's cheaper than fresh. He is not dumb enough to make the decision on his own, however, and asks the other guys for an opinion. Handsome Chris says, "go for it!" which we have on tape.

Back at the Huge Top Chef Kitchen, the Pink Team girls - Lindsay and Sarah specifically - go ballistic when they find bags and bags of still-frozen pre-cooked shrimp. Lindsay especially is not pleased. She asks Handsome Chris whose idea it was and he pretends not to be responsible, laying the blame firmly on Keith. 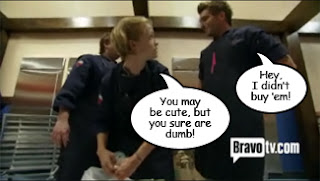 The Green Team seems much more cohesive because rather than having bossy girls trying to wrestle control of the situation while not actually doing anything to help, they have Chuy acting as team leader. His family is originally from Mexico, so he's got a good grip on the cuisine in general. Oddly though, he pronounces every Mexican food term with a flat American accent. I half expected him to pronounce the Ls in "tortilla."

The next day, the cheftestants have an additional 2.5 hours to finish cooking and set up their buffets at the venue. The whole time, Sarah and Lindsay show their control-freaky sides by taking issue with all and sundry - except, as we shall soon see, with important stuff.

The flood of guests arrive, as do Blanca Flores in a gorgeous corset gown fit for a princess, Padma, Tom, Johnny Hernandez, and this week's fourth judge, Hugh Acheson. The cheftestants serve some passed appetizers before the judges hit up the Pink Team table for a full tasting. 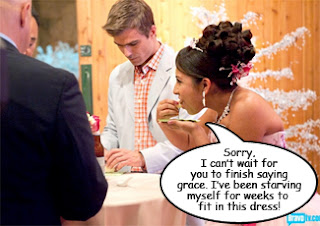 They take issue with Keith's enchilada because he made it with a flour tortilla instead of a corn one, prompting Hugh to call it a burrito. More tortilla issues ensue when Sarah and Lindsay serve store-bought ones with their underseasoned cochinita pibil. Just about the only dish that receives praise on the Pink Team is Handsome Chris' corn salsa, so it's pretty clear that this team is the losing team. 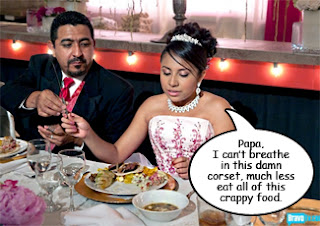 On the Green side, Squinty Chris' empanada is praised, and everyone enjoys Ed's gazpacho. Heather's tres leches cake looks like the Leaning Tower of Pisa, but Blanca likes it a lot.

Padma tells the Green Team right then and there that they are the winners, but everyone still gets herded into the Pozole Room. After a bit, Padma calls out Sarah, Lindsay, Keith, and Kal-El as potential losers. She asks the chefs to explain themselves and Sarah takes the opportunity to talk about the shrimp cocktail issue. The judges had no idea that they had planned to serve shrimp, so there was no need to mention it at all. 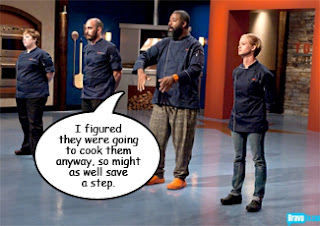 Keith then accuses Sarah of throwing him under the bus (which I didn't expect for a couple more episodes at least). 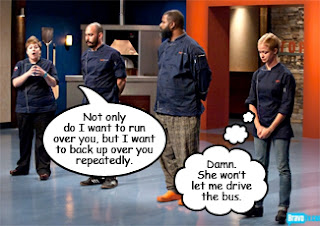 Jor-El made a tough, overcooked, fritter to replace the shrimp cocktail, and despite producing (with Nyesha) a well-received carne asada dish as well, it landed him on the bottom of of the heap.

In addition to Shrimpgate, Keith's use of a flour tortilla for his enchiladas was a big problem. He claims that where he's from, flour tortillas are customary, but if his team had suggested he use corn, he would have done that. After all, there were plenty of store-bought corn tortillas floating around. Which prompts the question: why didn't control-freaky Lindsay and Sarah correct Keith? Beause they didn't really give a rat's ass about the team...I'd keep an eye on those two bus-drivers in the future.

In the end, Keith's mistake ends up as the most tragic and he is sent packing.

Next week: tortured horses, bulls, and calves! In other words: Rodeo. Call PETA.