Ok, so this week we might be a little short on images, because I had a hard time finding the "show shots" on the Bravo site, and by the time I did, I didn't feel like messing with them. 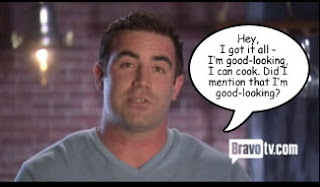 First we meet the chefs, the full-of-himself Bill Haley, who's a sous chef at the Plaza Food Court. He thinks he's got it all - everything except modesty. Then there's caterer Sharon Robustelli, who changed careers after her daughter was born. And Frank Otte, Jr., who likes to think of himself as an "executive" private chef because, as he tells Rocco, he doesn't make hamburgers and hot dogs for families. No, instead, he makes an ass of himself on national television. And I know it's not nice to make fun of people because of their looks, but Frank is such a douchebag that I think it's completely warranted. I've never been so repelled by dimples before. I can't help but think of Bat Boy. 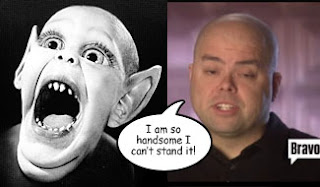 Anyhoo...they cook and serve their signature dishes to Rocco at the Altar of Judgement. Bill presents a rack of lamb that he's trimmed to a fare-thee-well. Rocco wants fat, because fat is good (don't tell that to the slobbering fangirls who bought his diet books!), but there is no fat on the meat. But...Rocco seems to like the dish just fine otherwise. Frank made a prosciutto-wrapped halibut with creamy sauerkraut and tiny potato "pearls" that are a tad underdone. He thinks they're perfect and doesn't back down when Rocco calls him on it. Rocco says he likes his dish but not his attitude. It's terrible to get out-douched! 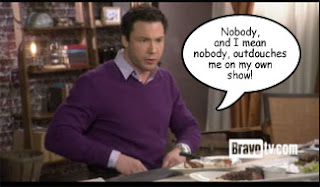 Sharon made a espresso-coated steak that Rocco appreciates for its lack of burnt coffee flavor. Because, creep that he is, he expected it to taste bad.

In the end, Rocco sends Bill home. Good-looking just doesn't cut it in the big world.

This week's theme is fashion, and Rocco expects Frank and Sharon to create both ready-to-wear and couture versions of each course they present. The fashion theme makes Sharon happy, but is a bit intimidating for Frank. He tells Jes Forehead that he wants his dining room to be a reflection of his wife, who has good taste. After all, she married him. Poor girl must be deaf, dumb, and blind. I know I'd want to be if I had to look at those sinister dimples every day.

While the contestants are shopping, we get a voice-over explaining the meals they plan to cook. At this point, we find that Bat Boy is not only the King of Douches but also that he has serious issues with pronunciation. First he says he's going to make a duo of Caesar salads that are "a jux-tah-POZ." For his second course, he's making a steak FRIT and a filet of steak. Then will come an apple crumble and an apple tart with cinnamon ASS cream. (Ok, so I added that last part.)

Sharon, who is much MUCH more likable, is doing a first course of potatoes gratin paired with creme fraiche-and-caviar-stuffed mini potatoes. For her entree, she's making tuna salad and sesame-crusted seared tuna, and for dessert, smores and a chocolate ganache pot de creme. Her dishes sound so...pedestrian, no?

Back in the kitchen, Frank does his best to belittle Sharon. He says that he's got to step up his attitude, smile more, and act more like a housewife. Sharon comes right out and calls a spade a spade. Or in this case, a douche a douche. 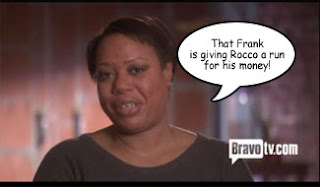 The guests arrive: Dinner Party Download duo Brendan Newham and Rico Gagliano; fashion personality/journalist Katrina Szish; actress Nikki Blonsky; fashion designer Nicole Miller; and Bravolebrity Kara Janx. Kara has just appeared in another reality show called All On the Line with Joe Zee from Elle Magazine, so she must need cash or something. She probably thought, "while I'm whoring myself on yet another reality show, I might as well see what else is out there," so she called Bravo. Here's how I think that conversation went down.


Kara: Do you have any shows I could appear in? Fashion-y things. I hear Chris March got his own show.
Bravo: Chris March is gay, so he's interesting. But we do need guests for a show called Rocco's Dinner Party.
Kara: Rocco who? Madonna's son?
Bravo: No, no. Rocco DiSpirito. He's a formerly-brilliant chef who's hawking diet food cookbooks now.
Kara: Never heard of him.
Bravo: ....
Kara: Will I get paid?
Bravo: You'll get dinner and $150 in merchandise from the Bravo store.
Kara: I'll do it.

Rocco takes Nicole Miller into the kitchen where they talk about the "first look" setting the tone for a whole fashion show. Which brings us to this week's twist - create a "first look" dish that will show the diners what to expect for the rest of the meal. Sharon doesn't really have extra food, so she decides to use some of her tuna in a tartare. Frank, however, bought too much and has a gaggle of poussins in the fridge to use for his "amuse BUSH." 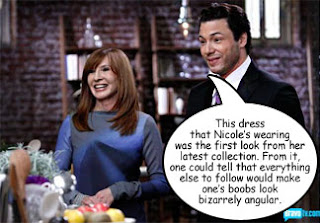 Sharon is presenting her meal first and she admits that she has timing issues. She starts off with her tartare served in Chinese soup spoons with a bit of Parmesan crisp. The guests aren't all that impressed with such a mundane starter, although Brendan seems to really get into that Parmesan crisp, thinking it's a potato chip. Next, Sharon sends out her duo of potatoes, the RTW gratin and the couture version with caviar. The diners go wild for the caviar so Rocco goes back into the kitchen for the whole tin and a spoon. When he comes back, he puts a big dollop on every plate. Not sure if it's to be over-the-top, or to kill the taste of the potato....

Meanwhile Nicole Miller is going on about how her son ate caviar out of the tin at the age of 3, and how a friend of hers makes pizza with caviar on top, etc. Yes, we get it. You're rich and privileged. STFU. 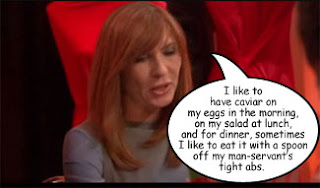 Forty-four minutes into Sharon's party and there are two courses yet to be served, so Rocco stomps into the kitchen. Sharon is still chopping her tuna for the salad and Rocco reminds her that she is running out of time. Eventually the tuna dishes hit their plates and the guests all love her RTW tuna salad. Because the clock is ticking, she has to make a service faux pas by sending the dessert out while the entrees are still on the table. It's still too late: Rocco calls time and her minty s'mores must be eaten en route to the other dining room.

On to Bat Boy's party. He sends out a roasted poussin breast that the guests love, followed by his Caesar salad two ways. While Katrina seems intimidated by the white anchovy on the couture salad, she eats it and loves it. Otherwise, Nicole Miller says the salad is overdressed. Plus there's no caviar on it so why bother?

During dinner conversation, Nikki Blonsky announces that she loves fashion and Project Runway and that Kara Janx was her favorite competitor on that show. Tell that to poor Malan Breton, who thinks HE was her favorite. 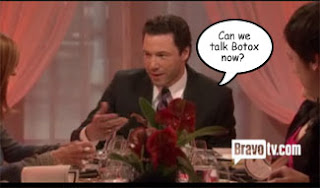 Next Bat Boy serves his duo of steak in two huge portions. The waiters present both ketchup and bernaise sauce to the guests, which is a nice touch. Not a nice touch is the puddle of overly-pungent bleu cheese sauce on the couture plate, which makes Rocco cringe each time he tastes it. And finally, the desserts: the guests devour the couture tart with ice cream and ignore the crumble. Nicole says it's dry, with undercooked apples. And no caviar!

And at that, it's time for Rocco to make his decision. He doesn't even ask the guests which they prefer. I hoped that Sharon would get the win because Bat Boy was so damn obnoxious, but I think her timing skills really did her wrong. Also, her dishes seemed so simplistic - come on - tuna salad? Even if it was the diners' favorite dish, it was not dinner party fare. And so Frank, with his overwhelming bleu cheese sauce and dry apple crumble, was awarded $20,000, sending the message that sometimes it's good to be a douchebag. 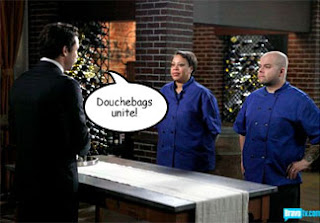