This week, the final five Wanna-bes - Whitney, Jeff, Susie, Mary Beth, and Vic - meet Bobby Flay at Chelsea Market. He tells them they are to take an hour to explore the market and taste the food available in the shops and restaurants because they are going to film a 2-minute segment of The Best Thing I Ever Ate. 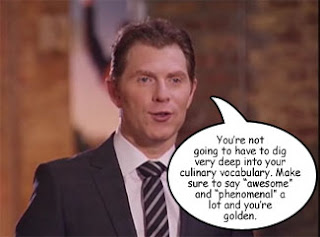 The Best Thing I Ever Ate is a show on which Food Network personalities and other food industry people (including Top Chef Season 1 contestant Lee Ann Wong) rave about restaurant dishes they've stuffed into their maws at some point in the recent past. People appearing on the show apparently have to enroll in a course at the Tyler Florence School of Vocabulary, because "awesome," "phenomenal," and "amazing" are the words they use most often, paired with heavy eyerolls and orgasm faces.

During their hour, Vic gravitates toward Buon Italia because it fits his concept of All-Italian, All the Time. Jeff checks out sandwiches at Friedman's Lunch, and Susie is tasting anything she can put in her mouth. Her giant belch at the end is pretty amusing, but then she's never struck me as ladylike.

Back at the studio, Mary Beth is sure she has an advantage in this challenge because she's good with words. She's also easy to please. 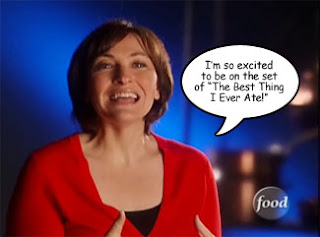 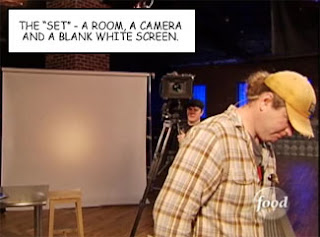 Susie goes first and spends more time going over the ingredients in her dish than making the requisite orgasm faces and saying "awesome!" 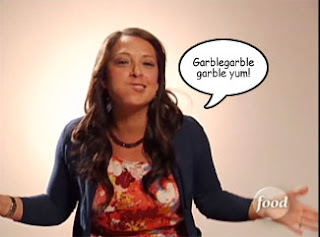 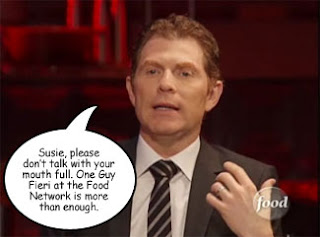 Vic has the same issue. Then Jeff comes out and does an awesome phenomenal amazing great job describing his sandwich; when they cut to shots of Bobby, he seems to be salivating.

Mary Beth talks about a crepe and I swear it sounds like she's calling it "crap." Gotta roll that "r"! Whitney, who also had a crap, I mean crepe, has to change the spiel she rehearsed in her head because Mary Beth took all of her good descriptors. 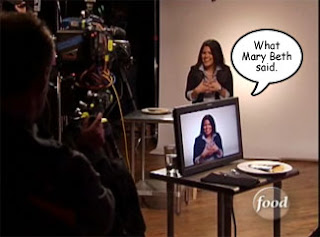 Ultimately, it was Jeff's presentation that impressed Bobby's taste buds the most, and he is awarded an advantage in the Star Challenge.

Speaking of which...the challenge this week is to put a spin on an "entertaining staple" - the roast. Not in my house - as much entertaining as I have done over the past 20 years, I've put a slab of meat in the oven exactly twice. Anyhoo, Jeff's advantage is that he gets to assign the proteins. He gives Whitney a crown roast of pork, Vic a prime rib, duck to Mary Beth, leg of lamb to Susie, and takes a rump roast for himself. I'm sure there's a joke in there somewhere but I haven't yet had my coffee. 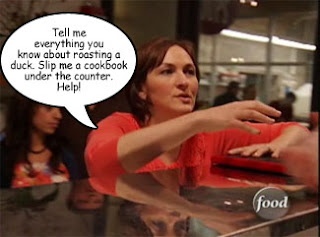 They head to Dickson's Farmstand Meats, a butcher stand conveniently located in Chelsea Market. Mary Beth has never cooked a whole duck before. She's a bit panicky about the whole thing, so she grills the butcher for prep tips while the other Wanna-bes stand around, acting annoyed

Back at the Flatotel, we see Susie having doubts about herself so she calls her sister for a red herring confidence boost. And for the hundredth time during this competition, the subject of her dead papi comes up. Ay yi yi! At this point, if she wins, it will be the equivalent of a pity f*ck.

The next day, the Wanna-bes meet Bobby at the venue. He's standing in front of a sign that reads "Food Network Roast" and tells them that not only will they be preparing meat, they are also going to be roasted by a bunch of has-beens never-was comedians: Louie Anderson, Judy Gold, Bobby Flay's good buddy Anthony Anderson, Aubrey Plaza (who?) and the former voice of the AFLAC duck.

Jeff has done comedy before, and thinks that performing in front of professional comedians is a lot of pressure. But he's not there to be funny - he's there to become a Food Network Jackass Star. In addition to his ubiquitous sandwich, he's making a side dish of potatoes cooked in "sweat." SUE-it, maybe?

Susie wants her dead father to feel honored to have a child like her. But I don't know how that's gonna happen since he's DEAD.

Vic goes first, serving up a huge slab of perfectly cooked prime rib. Aubrey Plaza says she's scared of his food and is not sure how to eat it. Vic, always the gentleman, volunteers to cut it up and feed it to her. Because she's cute. Anthony Anderson then tells Vic he's scared, too, but for some strange reason, Vic doesn't offer him the same service. 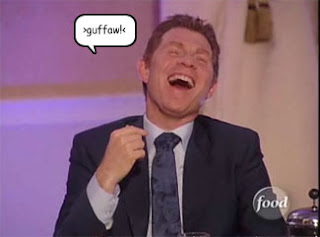 Tushface says that the switch from cuddly Mama's Boy back to the flashier Vic Vegas is confusing and the panel votes to kill off that character there and then. One Guy Fieri is apparently enough.

Mary Beth goes next, and after having issues with her duck, it's nice to see that everyone loved it. But while they enjoy the food, her academic blather bores the comedians. Anthony Anderson offers a backhanded compliment, saying "Food Aficionado" would be a better title for her show.

The suddenly terrified Jeff is next, but we don't get to see his presentation because there's a commercial break. One of the spots is for Caesar's Palace in Vegas, where apparently Bobby Flay routinely comes out to talk to Mesa Grill patrons. Then why didn't he come out and talk to Mr Minx and I when we were there in 2005? It was my birthday, dammit. Now I feel slighted. 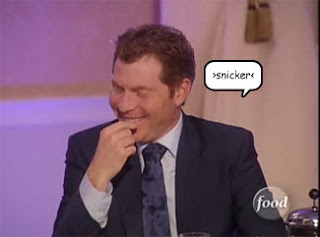 Back to the show. Jeff's Italian beef sammich is a big hit with everyone, as are his potatoes cooked in sweat. I mean suet. And of course talking about rump roast with a group of comedians is always a good place to work in some ass jokes. 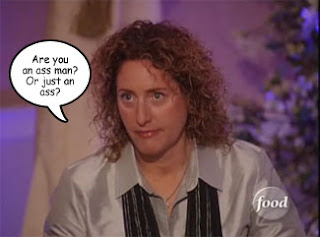 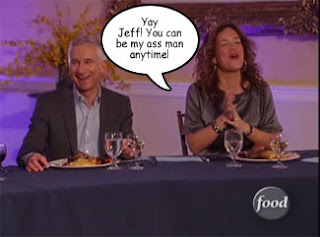 Gilbert Gottfried says he'd give Jeff a cooking show just to keep him from doing stand-up comedy again. Everyone agrees they would watch him, especially Bride of Fogelstein, who makes goo-goo eyes and kissy faces at him from across the room.

Susie then comes out and serves her lamb with root vegetables, which Anthony Andrews calls the most flavorful dish of the day. She charms everyone with her story about growing up in Michoacán, Mexico, and how she comes from a family of migrant workers. And hey, did you know her father is DEAD? E-fricken-nuff already! 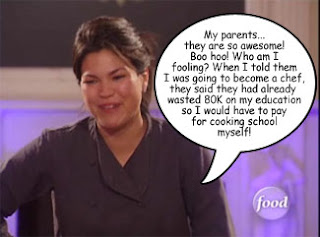 Finally, Whitney serves her crown roast of pork. Told repeatedly throughout the competition that she needs to drop her guard, she does so a bit too much, bursting into tears while talking about her parents. And they're still alive! The comedians like her food but Gottfried calls her a "soulless flesh-eating zombie" which is both somehow cruel and on the mark.

Later, in the Evaluation Chamber, Bobby compliments the group by saying that their food was at the high level expected from a Food Network Star. So I have to ask: where does Sandra Lee and her packaged taco seasoning fit in among the crown roasts of pork and duck with blackberry sauce?

As always, Susie is complemented up and down, with Flay calling her dead father raw talent, "gold." Whitney, on the other hand, just isn't cutting it because her parents are not dead yet.

Vic is questioned about his persona. Tushface doesn't want to see him morphing back and forth from Mama's Boy to Vic Vegas. Bobby suggests the he use his birth name and just be Vic 'mo Moea. Tush then makes a lame attempt at humor by saying that he has driven Korean cars that weighed less than the Flintstonian hunk of meat Vic served them. Um. Ha?

Bride of Fogelstein then raves about Jeff and his presentation and his sweat suet.

Finally, they tell Mary Beth that while she should be commended on making a whole duck for the first time, she didn't come off user-friendly enough in this challenge.

The best performers this week were Vic, Susie, and Jeff. Sexy Jeff gets the win. This leaves Mary Beth and Whitney up for elimination. Remember back in week 1 I predicted that Whitney, Jeff, and Orchid were going to be the final three? Well, so far I have gotten 2 out of 3 wrong....

A shame. I liked Whitney, live parents and all.