It's week three for the Food Network Star Wanna-bes. Let's see who screws up the most this time, shall we?

In the Star Kitchen, the Wanna-bes find mentor and Crest White Strips Spokesmodel Giada DeLaurentiis ready with their Camera Challenge. 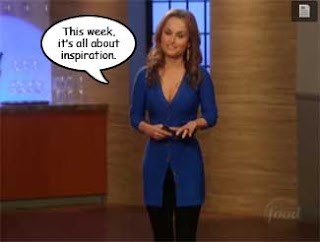 The Wanna-bes have to create a dish inspired by a movie genre and present the dish on camera. Because using a knife block would be too obviously copying from a show Food Star is already pretty obviously copying, they instead draw their genres by pulling cards out of boxes of popcorn. I'm betting it was cheese popcorn. And it shakes out like this: Herb gets Mystery; Paul gets Drama; Brianna gets Comedy; Dzintra gets Action; Brad gets Animation; Tom gets Romance; DAS gets Foreign; Serena gets Western; Aria gets Sci Fi; and Aarti gets Horror.

Aarti says she "hates horror movies." At that very moment, in the Food Network preview video for this episode,  Guy Fieri walks into the room. Could that be any more perfect? It's almost as if *I* wrote that scene! But alas, that's not quite the way it played out in the episode. Instead, Giada introduces him like he's something special, rather than the gut-churning douchebag he actually is. 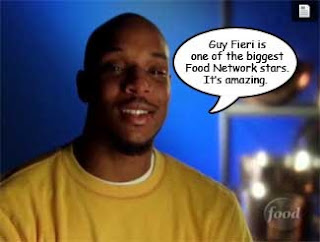 Truly amazing. Amazing that there are viewers who can stomach watching him shovel food into his mouth and talk at the same time.

After the cooking time is up, the Wanna-bes get a minute to present their dishes to Giada, Fieri, Tushface, and the camera.

DAS, in addition to being awed by Guy Fieri, also shows he doesn't know a whole lot about either food or movies. Having never seen a foreign film in his life, and not really knowing anything about foreign food, he decides that Mexican would work. And Mexico - long a hotbed for filmmakers - means tacos! It's surprising he didn't use one of those Old El Paso taco kits, but he's probably saving that trick for when Sandra Lee makes a guest appearance on Food Star. 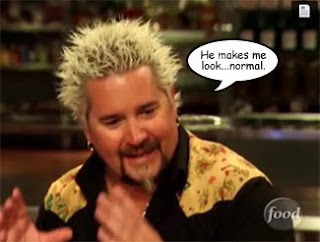 Brianna's "comedy" presentation is far closer to tragedy than anything else. Aarti comes out with confidence and nails her horror genre with some bloody-looking meatloaf. Predictably, Brad's presentation is hella dull, but his food is perfectly executed. Tom's presentation is much improved over past weeks, but his pommes frites are pommes flat. Aria gets points for incorporating her new "family food" POV into her presentation. And Paul is obviously desperate. 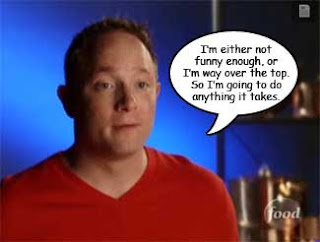 The judges aren't buying anything you're selling. I predict Paul will be gone very soon. 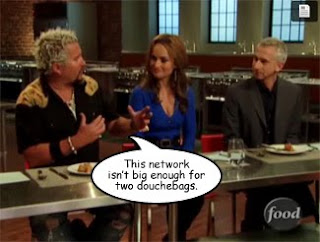 Serena cleverly took the Spaghetti Western angle for her theme and impressed the judges with her pasta topped with chili. Herb seemed unsure of himself, and Dzintra seemed uncomfortable.

When all is said and done, Paul and DAS have the poorest performances in this challenge; Aarti, with the strongest, gets the win.

Fieri then tells the Wanna-bes that because Bobby Flay is back in NY, he will be sitting in as a member of the selection committee. And I think, "Oh, great. I am going to be further subjected to that albino-porcupine-haired buffoon."

After a commercial break, we see the Wanna-bes dressed up and piled into vehicles, heading off to a nightclub called The Highlands where they are going to walk a mock red carpet in order to see how they handle stardom. Brianna sashays down like a diva, grinning inanely but completely ignoring the fake paparazzi and fans on the sidelines. 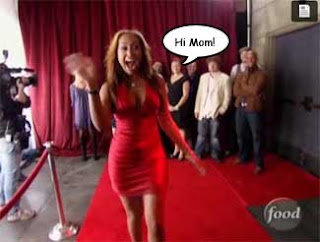 Guy Fieri stands at the end of the line giving disapproving glances and tsk tsking all and sundry. 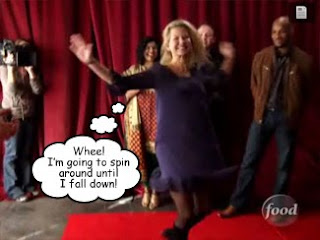 Dzintra twirls like a kindergartener and tells the paps that her name means "amber woodpecker" in Martian. In English, it means, "inane space cadet." DAS high-fives the crowd while repeating meaningful phrases such as, "what up what up what up" and "duh, what's a foreign movie?" And Paul acts like a complete and utter idiot, mugging and cutting up. Even the king of idiocy, Fieri, rolls his eyes at the display. 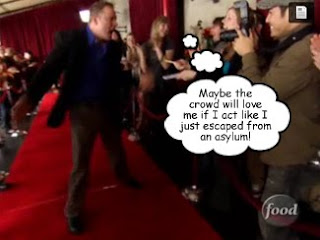 At the end of the red carpet, the Wanna-bes each get a color-coded swag bag that contains an ingredient they must use in a dish. After pairing with the contestant with the same-colored bag, they find they must also create a dish with this partner, using both of their theme ingredients. And not only that - they have to prepare these bizarre combos for a party.

The teams: Peaches Brianna with fennel and Herb with MGD 64; Aarti with Taleggio cheese and Brad with dark chocolate; Paul with parsnips and Serena with peanut butter; Dzintra with mushrooms and Aria with blueberries; DAS with red cabbage and Tom with bananas. 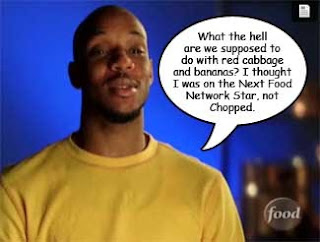 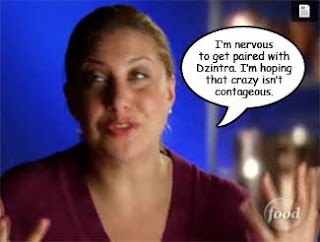 After a trip to the store to get essential ingredients, the Wanna-bes put on chef coats and get to work in the venue's kitchen. At one point, Serena needs to pass behind several contestants but fails to announce her presence. Brianna doesn't realize she's there and steps back, right on Serena's foot. Serena falls and claims she hears a "crack," however, she keeps on cooking despite the pain.

Brianna feels no guilt over the situation. I'm beginning to think that she's a sociopath. 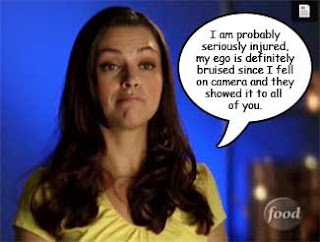 After the cooking is done, the Wanna-bes set up stations and get ready for the party. Guy Fieri arrives with the guest of honor. 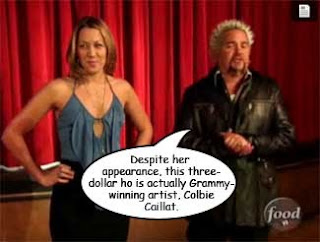 As the selection committee makes their rounds, we see that Brianna still has trouble engaging her audience, while Herb does well in that department. All of their food is successful. Brad and Aarti are both entertaining but Brad's dish and the collaborative effort are both failures.

Dzintra and Aria are a bad pairing. Aria is afraid of what will come out of Dzintra's mouth  - particularly after she tells the crowds that her mushrooms are not poison so they're safe to eat - so when the Selection Committee arrives, she decides to do all of the talking. Dzintra resents this and shushes Aria in front of the Committee, then puts her foot right into her mouth by comparing her frisée dish to hairballs. So inappropriate. 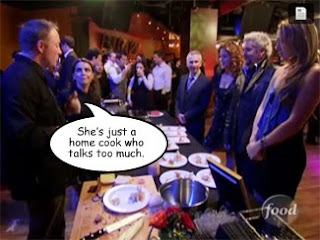 Serena is in pain but blathers on as she is wont to do, while Paul treats her in a condescending manner. They're like a comedy team - an awkward one. The cringe factor is so high, it's almost like watching The Office.

I'm surprised there's not a psychologist on the Selection Committee - this season's Wanna-bes have some serious personality disorders besides the usual (and perhaps necessary) narcissism.

Finally, Tom and DAS act silly and fun, and the guests seem to like them. But their collaborative dish of fried bananas with a jerk cabbage topping turns everyone off. 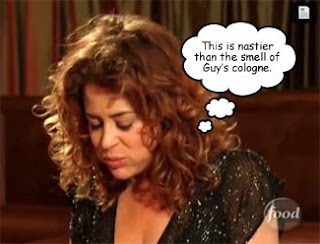 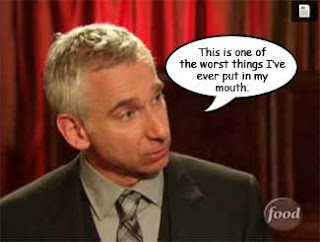 Back home, in front of the Executioner's Judging Committee, the Wanna-bes get their usual dressing down. 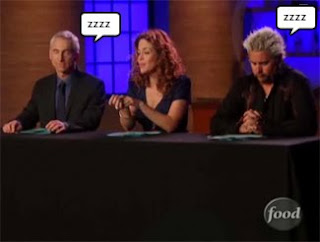 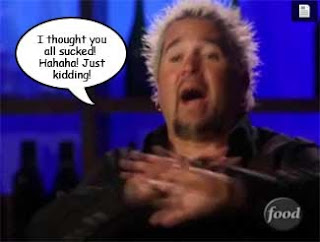 Brianna gets called out for her chilly demeanor, to which she responds that she's always had trouble in that department and even has issues with making friends. Warning, Will Robinson! Didn't I say she was a sociopath? In the end, Brianna and Herb get the win on the strength of their food.

On the bottom are Paul and Dzintra. It's a tough decision -  I'd send both of them home and get it over with. However, only Dzintra is asked to pack her crazy and leave. 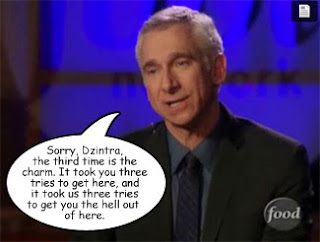 Next Week: Food Star copies Top Chef even more by featuring two of the finalists from the most recent season of Top Chef Masters, Susan Feniger and Jonathan Waxman!
Posted by theminx

OMG!! Please! I would rather sit and watch "Grandpa's Hat" than watch any of them!!!

I watch them, i do, Dzinthra.. omg i am so glad that flake is gone.
I agree about Guy, this cracks me up so much!!! Now i know every week i can look forward to your blog.. i was cracking up!