While in NY, I had the opportunity to dine at Tom Colicchio's Craftsteak (which hosted a party just a day or so before after filming the TC reunion special...sorry I missed that event!).
The space is beautiful (as evidenced by these photos taken from the Craftsteak Web site), with a two-story glass-cased wine room (seen at the right of the first photo) separating the bar and dining room and a soothing neutral decor. Our party of eight sat at one of the round booths in the second photo (the center one, as a matter of fact). 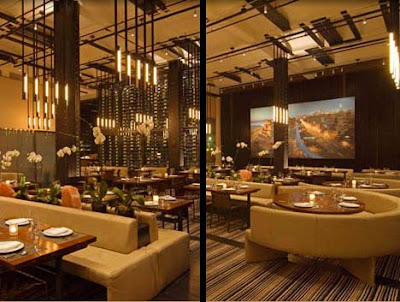 When at a place that specializes in steak, why order anything else? I opted for the filet mignon, served medium rare with a charred exterior. It came exactly to order - a thing of beauty. My only complaint is that they serve all of their steaks pre-sliced, for easier sharing. Pre-slicing means that the steak gets cold a lot faster than one would like, particularly since it had already rested a bit after coming out of the pan. But the flavor was good and beefy, and the crust was well-seasoned. The steaks came with tiny sauceboats filled with chimichurri, an ethereal whipped bernaise, a flavored creme fraiche, and the house steak sauce (a little sweet to my taste). 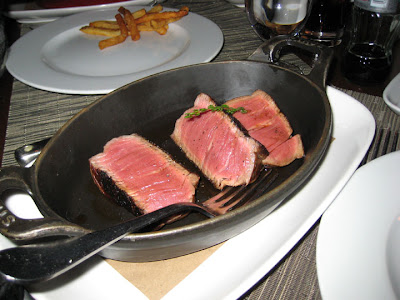 The table also ordered several side dishes - brussels sprouts with bacon, cauliflower, baby carrots, Jerusalem artichokes, fries, onion rings, mushrooms - all fab. I would have been quite content making a meal out of the veg alone. 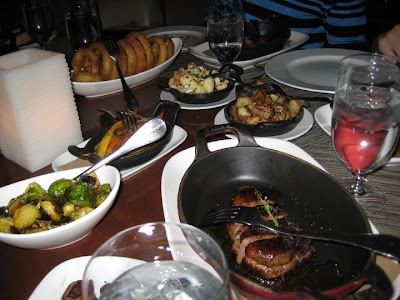 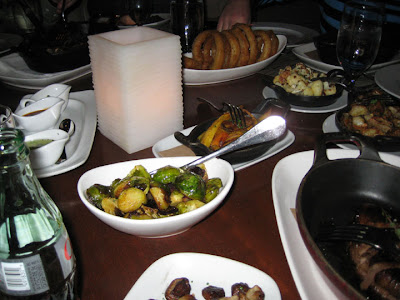 Dessert (which I neglected to photograph) was also well-received by the group. I had the monkey bread which was actually a little ring-shaped brioche doused with toffee and pecans and served with rum raisins and a wee pitcher of creme fraiche. Our waiter pronounced it "phenomenal" - not an adjective I'd ever use to describe food - but I have to admit it was quite delicious, as was the lemon soufflé I tried.
Along with dinner came a dish of hazelnut petits fours and housemade "Oreo" cookies with a minty filling. And as we were leaving, we were handed individual scones for breakfast the next morning. A nice touch, and well-appreciated by someone who had a train to catch (that would be me). 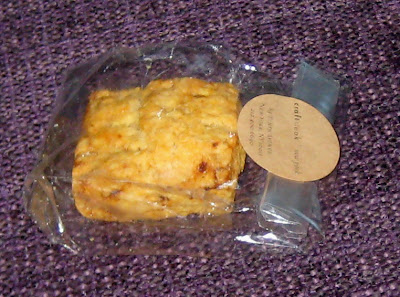 Your steaks still got cool in those heavy (and I assume 'hot') skillet things?

speaking of steak,
forgot to send you to the store for this one on Feb 14th.

I didn't think to touch the skillet thingy, but I don't think the steaks were cooked in them. They probably weren't all that hot.

How funny that I was just reading about the new Craft and Craftbar restaurants in Atlanta last night in my hotel room magazine!

What did your meal cost?

There's a link to the restaurant's Web site in the first sentence of the post. The menu lists all prices, so you can make a rough guestimate from there. :)