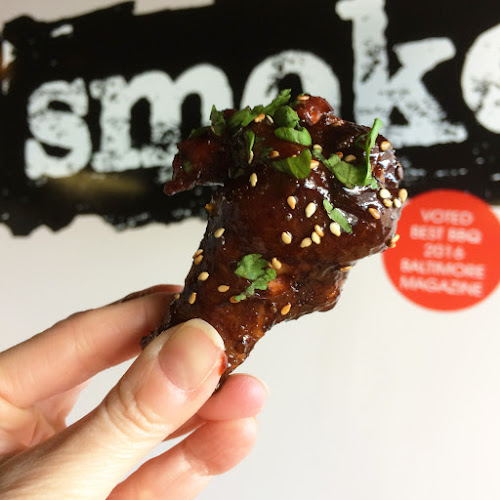 We finally got our asses to Smoke. We'd been meaning to for quite a while, but it seemed that every time getting there was a possibility, the restaurant would receive a great review in some local publication. We knew they'd be swamped with customers for at least a week or two afterward; they definitely sold out of things on a regular basis. We didn't want our hearts set on trying something they'd be out of, so we waited. And then, on a random Tuesday, we went.

Smoke is a "modern American bbq restaurant" which means they have crap like chickpeas that have no place in my life (I am allergic to them). It's a vegetarian-friendly place, believe it or not, serving grilled smoked tofu and fried green tomatoes as well as those chickpeas. We tried the tomatoes, which were coated in a thick yet light and crisp batter and came with a side of Tabasco remoulade. There were a couple of pickle spears in there, too, but somehow they didn't taste particularly pickle-y. At first, I thought they were just oddly shaped tomato slices. Tasty nonetheless. 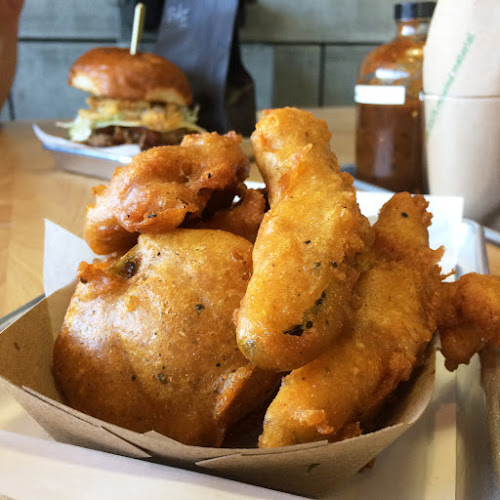 We also tried the "Boss Dawg." No dogs were harmed during the making of this sandwich, but at least a couple of pigs met their maker. With pulled pork, house-cured bacon, cheddar, slaw, crispy onions, jalapeno-bacon glaze, and pickles, this beast seemed like it should be sloppy, but it was not. We passed it back and forth between us, taking bites of the smoky, meaty, goodness, and dropped nary a bit of it. I really enjoyed the combination of flavors and textures, and while the meat was delicious, the crispy onions really made it. The pickles, too, had an impact. Definitely one of the best sandwiches I have eaten in a long time. 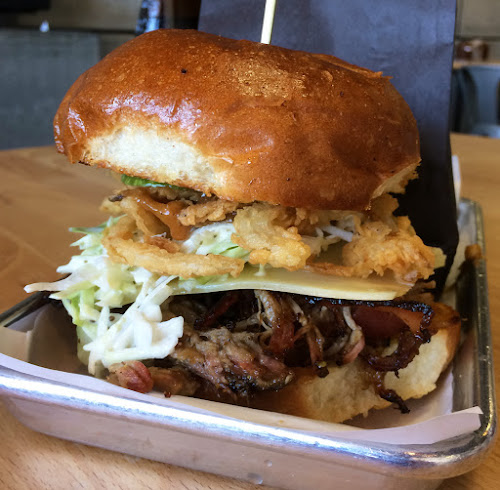 We also ordered the KFC wings, which are smoked, fried, coated in a Korean bbq sauce, and garnished with cilantro and sesame seeds. A cup of tasty five-spice pickled veg came on the side. I had mixed emotions about the wings. They had good textures--meaty, firm, not sloppy, not too much sauce--but the flavors of hickory smoke and Korean bbq got in each other's way. That's just my opinion, so YMMV. I plan on going back and trying the pork belly served with the same sauce and see if that works any better for me. 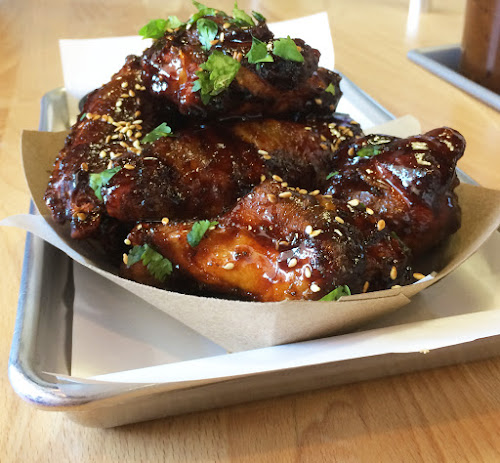 There are lots of other things I want to try, too, like the pit sandwich, the tofu, the bacon wrapped dates, the "righteous" mac and cheese, pretty much everything we haven't already tried (except the chickpeas). I love me some old school Andy Nelson's, but there's definitely a place for new style bbq in my stomach as well.