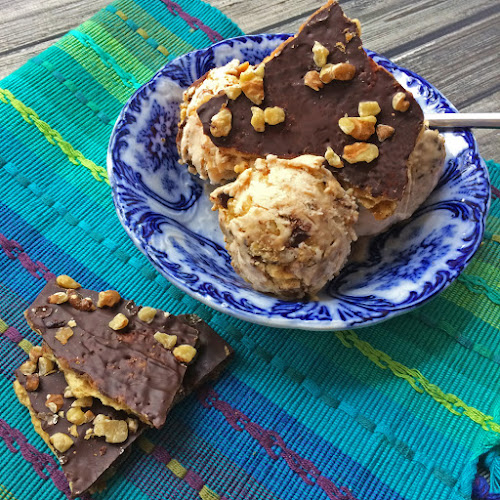 Earlier in the year, I made a cake using flavored tea that I bought on sale from David's Tea. I still have several varieties left from the cute star-shaped gift set and I've decided I'll probably use a few of them to make ice cream this spring and summer. Yes, ice cream. Tea infused milk or cream makes a lovely ice cream with barely any effort--I normally have to heat the cream anyway, so why not let some tea leaves hang around in it for an hour or so before I proceed?

And so it went this particular weekend that after I selected English Toffee flavored tea to make my ice cream base, I decided I also wanted to make some ghetto toffee. For completely unrelated reasons. A friend had sent me a video for a matzo toffee sometime before Passover, which put it in my mind. This matzo toffee was left unbaked, instead the caramel was cooked for a longer time. I suppose it was tasty enough, but I prefer a baked version. Not only do the saltines (or matzo, if you prefer) get toasted in the oven, but also the caramel gets a chance to ooze around to the bottom of the crackers and coat that side, too. So the toffee is tasty on both sides. You can choose your method; I've included the one I prefer within the recipe below.

So...toffee ice cream. Ghetto toffee. Seemed to me they needed to become one. So I broke up some of the toffee and layered it in the finished ice cream. It's maybe a bit more difficult to scoop, but the end result is very good. The crackers don't get soft in the ice cream, so there's plenty of great texture between them and the nuts and the thin layer of chocolate. I think this ice cream is a winner, and I hope you do, too.

If you can't find English Toffee flavored tea (though several companies, including Celestial Seasonings, do produce it), use a chocolate or caramel flavor instead.

Cover a large rimmed cookie sheet with aluminum foil. Lay out the crackers in one layer, making sure they are touching.

Combine the butter and brown sugar in a saucepan and bring to a boil. Cook 2-3 minutes, stirring constantly. Remove from the heat and pour over the crackers. Use an offset spatula to spread the caramel evenly. Place pan into the oven and bake for 5 minutes.

Allow the chocolate to dry completely before breaking up into pieces.

To make the ice cream: Put the milk, cream, sugar, corn syrup, and tea in a large sauce pot and cook over medium high heat until tiny bubbles start to form around the edges but the milk does not boil. Turn off the heat and cover the pot. Allow to steep for 30 minutes to an hour.

Strain out the tea. Reserve 2 tablespoons of the milk mixture and return the rest to the pot. Mix the 2 tablespoons of milk with the cornstarch to make a slurry. In a separate bowl, whisk the cream cheese and salt together until smooth. Prepare a shallow ice bath: in a large bowl or baking pan, place an inch or two of cold water and several ice cubes. Set aside.

Bring the milk tea mixture to a boil and boil for 4 minutes, watching carefully so it doesn't boil over (stir when it starts to expand), remove from heat, and slowly whisk in the slurry. Bring back to a boil over medium-high heat and cook until slightly thickened, about 1 minute. Blend a few tablespoons of hot milk mixture into the cream cheese to loosen it, then pour the cream cheese mixture into the pan of milk. Whisk well until smooth. Pour into a container with a tight-fitting lid and place the container into the ice bath until cool, ensuring that the water level doesn't come up as far as the lid. When the mixture seems mostly cool, refrigerate until completely cold.

Place ice cream mixture into an ice cream machine and proceed according to manufacturers instructions.