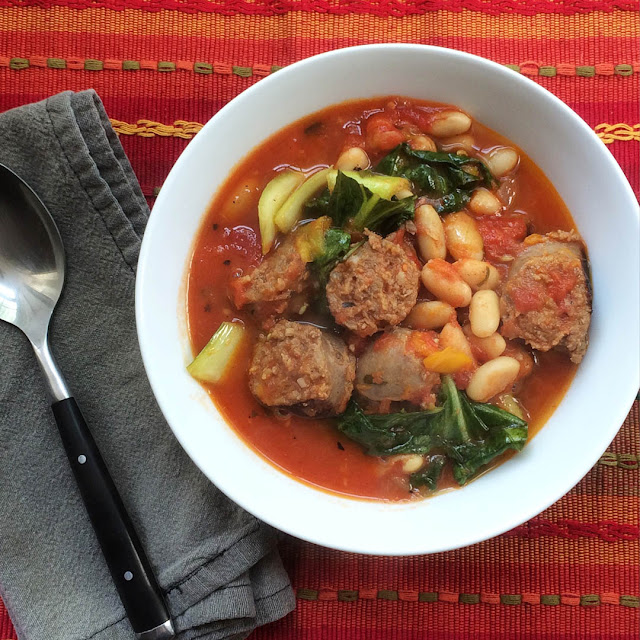 A recipe for a hearty stew might seem a bit out of place in May, but with the weird chilly and rainy weather we've been having here in Baltimore, it's really quite apropos. And actually, despite containing Italian sausage and white beans, this stew is really not all that heavy. It's tomato-rich, which brings a nice hit of bright acidity, perfect to chase away some rainy-May blues.

Normally, a soup like this might have some dark leafy greens in it, like kale. We didn't have kale, but we did have a head of organic bok choy from the farm box we received earlier in the week (from Washington's Green Grocer). It was green, and like kale, a member of the Brassica genus. But unlike kale, bok choy is crisper and juicier and cooks faster. And isn't kale. Come on, I know you are all as sick of kale as I am. Yes, it's green, yes it's good for you. But hell, there are plenty of other Brassica that are tastier and more fun to eat (gai lan, rapini, romanesco, heck, even plain old broccoli). Anyway, so I added bok choy. If you are a kale-ie, and have some hanging around, then by all means add it to the pot, remembering to remove the tough stem, and cook it for a bit longer to lessen the chew.

Serve with crusty bread, or by itself (as we did).

In a large pot, cook pepper and onion in a few teaspoons of olive oil and a pinch of salt over medium heat until softened. Stir in garlic, fennel seeds, and half the tarragon. Stir for a minute or so, then add the tomatoes and their juices and the chicken stock. Bring to a boil, then lower the heat to a simmer. Cook for one hour. (You could cook it for less, if you're in some kind of hurry, but the longer you cook it, the better it will taste, and the more mellow the tomatoes will be.)

About 45 minutes into the tomato + veg + stock cooking time, place the sausages in a saute pan with a half cup of water. Cover the pan and cook over medium heat until water has evaporated and sausages start to sizzle. Turning sausages occasionally, cook for about 8-10 minutes, until they are cooked through. Remove the sausages from the pan, cut each into 5 or six slices, and add them to the pot along with the cans of beans. Cook an additional 30 minutes. Taste for seasoning and add cayenne, a big pinch of sugar if the tomatoes still seem a bit acidy, more salt, and the rest of the tarragon.

Wash the bok choy thoroughly. Cut off the stem end, slice the bok choy crosswise into 3/4" pieces, and add to the pot. Cook an additional 10 minutes, until bok choy is tender.