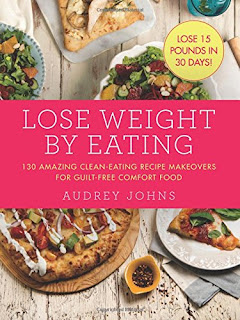 Blogger Audrey Johns has come up with what sounds like a novel concept but is really just common sense: cut out the crap. She found that by eating clean, real, non-processed food and cutting out that evil diet soda, she lost weight. Her book, Lose Weight by Eating, tells her story and provides 130 recipes for favorites like fudge brownies and fried chicken. Those brownies are real brownies, with butter, eggs, sugar, white flour--all the things you expect to find in brownies. No black beans, artificial sweeteners, or other weirdness. In other words, no feelings of despair or deprivation will come from using this book, despite everything coming in at 500 calories or less per serving.

There's nothing fancy or overwhelming in Lose Weight by Eating, no weird science or funky ingredients. Anyone interested in cooking nutritious and tasty food, even someone without a lot of cooking experience, should be able to work from this straightforward book. There's even a weekly menu plan listing all of the dishes (breakfast, lunch, dinner, and snacks) that are especially good for new cooks. (Other menu plans list dishes that are kid-friendly, vegetarian, or quick to prepare.)

Overall, a good basic cookbook that makes sense, even if you're not trying to lose weight. 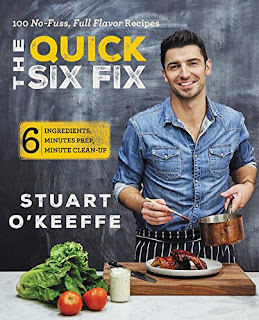 It's ok if you've never heard of Stuart O'Keeffe--before I got this book, I hadn't either. This Irish-born chef was featured on the Food Network's Private Chefs of Beverly Hills and even had his own show, Stuart's Kitchen, that was broadcast in Ireland and New Zealand. He was a brand ambassador and chef for Tupperware, too. But putting "celebrity chef" in front of his name doesn't make it so, nor does it have any actual bearing on the contents of this book.

The conceit of The Quick Six Fix is that all recipes include six ingredients, take only six minutes to prep, and six minutes to clean up. I wouldn't get a stopwatch out to check if that's all correct; everyone works at his own pace so it might take 10 minutes to prep and 15 minutes to clean up if you're a slowpoke. The numbers don't matter. The point is--these recipes are fast to put together, particularly if you've already stocked your pantry with the list of "must haves" he includes in the first section (Marylanders take note: Old Bay Seasoning is on the list!). However, the pantry staples are not included in the "6 ingredients" mentioned on the cover. In fact, some recipes have far more than six ingredients (and one of the dessert recipes includes nothing from the pantry). So that first in the trio of sixes that make up the "quick six fix" is more accurately described as "six ingredients that you need to put on your grocery list because you probably won't have them in the pantry already." (I guess that was a little long to put on the cover.)

Now that I've blown that whole 666 thing out of the water, let's examine the book without the conceit.

O'Keeffe's book has some rules to follow that will help users stick to creating a meal that is relatively quick to prep and tidy up. For one thing, one should read the recipes thoroughly before beginning--some he recommends reading three times. That way, there are no surprises and one can manage time more efficiently. It also familiarizes the user with the ingredient list so they can shop in advance for the things they need (whether it's one of the 6, or a pantry ingredient they don't already have on hand). Another useful rule is one he calls the "reverse traffic light theory." Basically, if there's a break in the action (say, waiting for something to come to a boil), the cook should take that time to clean up any messes they have created to that point (like washing knives and cutting board). I have always called it "clean as you go," and it is something that everyone who works in a kitchen, from professional chefs on down, should practice. Why leave everything for after dinner when you're too logy from those three glasses of wine to do anything but lie down and belch? All prep clean-up should be done before you sit down to eat, so you only have plates and the pots you cooked in to clean up after you eat. (This is a big pet peeve of mine, so pardon the lecture. It's definitely something O'Keeffe has right.)

The recipes themselves are pretty basic. Without laundry lists of ingredients, they have to be. But they all sound pretty tasty. Cider-braised chicken, which involves chicken thighs and a lot of cider vinegar to produce something that is "the perfect blend of tart, savory, and sour," seems like it would be great, and looks really easy. There are only three non-pantry ingredients in this recipe, but if you're like me, you have packs of chicken thighs in the freezer already, cutting the shopping list items down to two. There's also a recipe for Sticky Ribs, which uses hoisin, garlic, soy, brown sugar, and rice wine vinegar from the pantry, plus baby backs, ginger, and five spice powder from the grocery store. (I'm sure the dish would still be pretty delicious without the ginger or five spice). There are also recipes for breakfast and lunch items, pasta and soup, burgers, sauces, veg, and desserts.

While there are no guarantees that the recipes in this book will take a non-professional chef six minutes to prep and six minutes to clean up, someone who is looking for a book that contains recipes to fit every occasion and aren't particularly complex might get some use out of The Quick Six Fix.